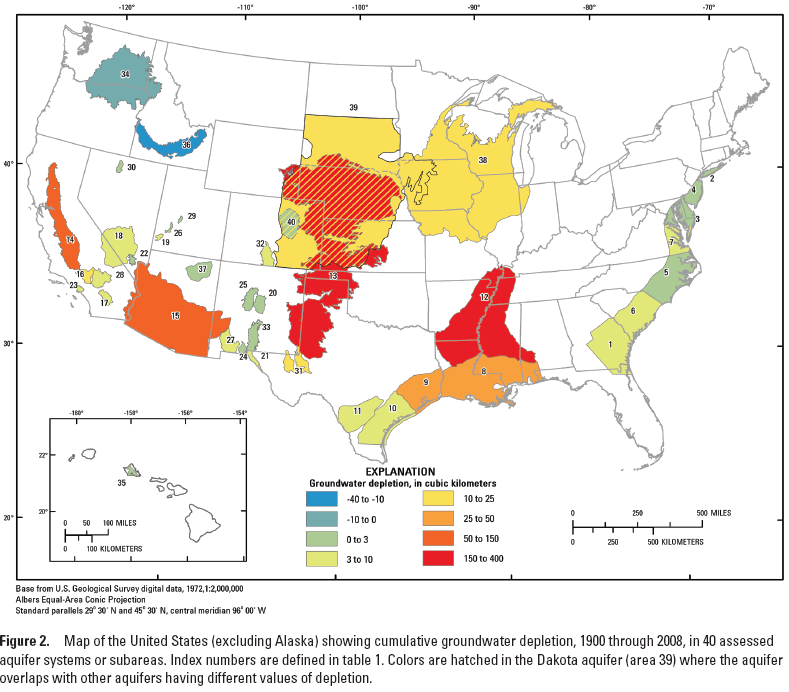 The Ogallala Aquifer is labelled as number 13, in the above USGS map.

Given the effects of climate change on aquifer recharge and drought cycles, coupled with the human depletion of the aquifer, is there any evidence that 'peak-water' could occur in the Ogallala Aquifer?

By 'peak-water', I am referring to a point where it becomes practically and economically impossible to pump water from the aquifer

This question is related to Recharge a dry aquifer?

It is definitely possible to completely drain an aquifer. However, as the potentiometric surface (water level) in the aquifer drops, extraction of water becomes less economical, but the perceived value of the water increases. It is possible to apply "unconventional" drilling techniques like directional drilling and fracking to extract groundwater. You could potentially get philosophical and argue that there is a point where the aquifer no longer meets the definition of an aquifer.

Your question is really a matter of scale. The USGS Principal aquifer map depicts the Ogallala aquifer as a complete and continuous hydrostratigraphic unit because that map is a national-scale map. It would be more appropriate to call it the Ogallala aquifer system, to remove implications that it is one continuous, well-connected aquifer system that runs across several states. It is much more likely that this aquifer is a group of hydrostratigraphic units separated by faults, confining units, and lateral discontinuities. Because of this horizontal heterogeneity and because pumping influence such as cones of depression is generally localized, you could potentially completely deplete some portion of the aquifer system while leaving other portions with some water.

In terms of the water budget, as you have shown in the above USGS figure, discharge is already outpacing recharge. In their Public Information Circular 18, the Kansas Geological Survey projects that some parts of the aquifer system will be depleted within as soon as 25 years, while other regions have a life expectancy of between 50 and 200 years. In an interview with the Lubbock Avalanche-Journal, the Center for Geospatial Technology at Texas Tech said that some regions of the aquifer in Texas only have 15 years of water left.

As water is removed from an aquifer, the pressure that water exerts to help hold up the aquifer skeleton is reduced. The reduction in water pressure can cause deformation in the aquifer. Some component of this deformation is recoverable (elastic). However, if the stresses on the aquifer exceed that of what the dewatered material can handle, then the dewatered aquifer/confining layers could undergo permanent compaction, leading to a decreased ability of the aquifer to store water. See USGS Circular 1182 for more information on these concepts.

While the technology exists to implement artificial recharge, either via injection well or infiltration ponds/galleries, this technique requires adequate geochemical conditions and an appropriate recharge source. Once an aquifer system is stressed to the point of compaction, its storage is permanently decreases, reducing its value as a candidate for artificial recharge. For more information on artificial recharge, see the USGS website.

14
Recharge a dry aquifer?
10
Is there any link between sea-water inflitration into groundwater and nitrate?
9
Source of water for the Great Artesian Basin in Australia
5
How much time does water takes to reach to the ground?
5
Do Hydro-Carbon extraction units pollute ground water?
2
Searching for ground water
13
How is it possible to use up the water in a region?
2
How to recharge ground water directly from river water