Related to the question Why don't scientists use fire entry suits to study volcanoes?, where the issue of volcanologist protection against lava splatter and bombs is discussed. Another major and sometimes sudden volcanic event are pyroclastic flows - the suddenness and swiftness of these events have occurred in many places, one recent example is the recent tragedy that occurred at Mt. Ontake, Japan, discussed in the question Why would volcano eruption cause cardiac arrest?.

There are many examples of volcanologists perishing due to pyroclastic flows.

Around some volcanoes in Japan, for example, there are reinforced concrete shelters touted as being pyroclastic flow shelters, as shown below on Oshima Island: 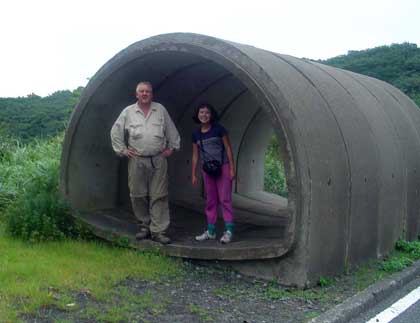 From personal experience, these shelters also surround Mt. Asama (have visited there).

How effective are these concrete shelters for survival against pyroclastic flows?

additionally, has there been any research for the development of protective gear against pyroclastic flows?

That should be obvious from the fact that those shelters are open and don't provide isolation from the exterior (only protection against falling stuff), a clear sign that they were never intended to protect from pyroclastic flows.

In fact, on that devastating 1902 eruption of Mount Pelée mentioned by user889, there were 30,000 casualties and only two survivors. The only one of them that was in the center of the city survived because he was in a poorly ventilated, dungeon-like jail cell, an experience that should serve as a guide of how a pyroclastic flow shelter should look, and that's nothing like the one in the picture.

Pyroclastic flows have often been considered to be by and large, unsurvivable, especially since the devastation in 1902 of St. Pierre on Martinique, many fatalities are due to hypoxia and severe thermal injuries (Hansell et al. 2006; Baxter et al. 1998).

According to the USGS webpage about pyroclastic flows, these events can occur very suddenly, without much warning at all (e.g. Mt. Ontake) and travel fast, and can be several hundreds of degrees Celsius. Pyroclastic flows also contain considerable amounts of toxic gases and rock fragments. The presence of water bodies in the path can result in lahars and mudflows.

As pyroclastic flows are variable in nature and can be sudden, there is no one-way of volcanologists protecting against its effects, except to get out of the way (if possible). The use of fire suits will limit mobility and still may not protect from the flow itself.

In the AGU blog So you want to be a volcanologist?, Jessica Bell, a volcanologist from the USGS makes the point that being prepared is crucial for greater chances of survival, emphasising the point of 'doing your homework' about the eruptive history of the volcano before going to the volcano. Gas masks, gloves, long sleeves and long pants are also crucial. Critically, a volcanologist must be:

very careful to avoid areas that could be dangerous – within the path of pyroclastic flows or mudflows or lava bombs, near gas vents or lava flows, or unstable ground are just a few.

It should be noted that several media reports mention that not all volcanoes have these kinds of shelters.

But where the shelters are present, they could provide an obstacle that could affect pyroclastic flow propogation but only when the shelter is distal to the eruption and if the flow does not last too long, related to modelling performed by Todesco et al. (2006) and earlier by Baxter et al. (1998) who assert that this situation is survivable.

Baxter et al. (1998) also state that through their models, the most effective shelters can shield against the dynamic pressure and heat transfer associated with a pyroclastic flow, especially if the flow is of short duration. This effectiveness obviously diminishes when the flow lasts a considerable amount of time, is large-scale or the shelter is too close to the eruptive source.

What these shelters won't protect from is fine ash dust, and not everyone sheltering will necessarily have a gas mask (as per the volcanologist above). Another problem with this, as noted after the Mt. Unzen eruption of 1991 is that even if shelters are spaced evenly apart - time is a major factor - the time to reach the shelter against the time it takes for the pyroclastic flow to reach that location.

A lot of shelters around some volcanoes that have had a past history of pyroclastic flows have 'exclusion zones' with the shelters in the distal regions of previous eruptions, this method of exclusion zones is claimed by Hansell et al. (2006) as being one of the only effective protective measures from proximal effects of an expected pyroclastic flow - which also describes, alongside the modelling by Baxter et al. (1998), the way that these shelters can have any effectiveness by being in the distal regions.

20
Why don't scientists use fire entry suits to study volcanoes?
13
Why would volcano eruption cause cardiac arrest?

3
Does flow banding only occur in silicic rocks?
2
What's a reasonable flow rate/mass flux for a fumarole?
2
Why are pyroclastic flows ground-bound?
2
How far a andesitic lava can flow and what is the speed?