How does a 'fire tornado' form?

A 'Fire tornado' or 'Firenado' or 'Fire whirl' are a fearful feature of forest fires world wide. Having seen one up close, I can attest that they are both awesome and utterly terrifying, but I am aware that these vortices are not strictly speaking, actual tornadoes.

An example, filmed in fires in 2012 around Alice Springs, Northern Territory, Australia, as in this YouTube Clip.

The Wikipedia page for this topic rather vaguely states

Often, fire whirls are created when a wildfire or firestorm creates its own wind, which can turn into a spinning vortex of flame.

But, the page does provide the following public domain image of a 'fire tornado': 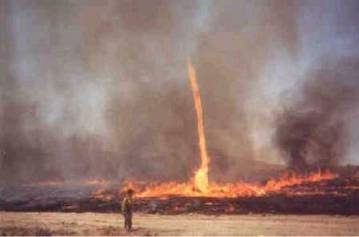 How does the vortex of fire in a 'fire tornado' form?

They form due to strong convective forces, coriolis effects, local wind and weather, and local topography. The fire effectively creates an intense localized low pressure cell due to the heating of the air which can behave similar to any low pressure system. I haven't seen one on flat terrain like your picture shows but when performing slash burns for silviculture purposes you can have very large tornados form along ridges as the fire burns uphill. These tornados can extend outside the fire zone under the right conditions but generally die out soon once removed from the source of heat.

15
Does a green or yellow sky actually indicate a tornado?
17
Why does the so called "tornado alley" exist?
1
Appearance of Tornado
5
How does the tornado chaser locate the spot?
6
How many buildings in tornado prone-areas have storm shelters?
3
How big was the eye of the El Reno tornado?