How much do anthropogenic carbon aerosols (soot) affect the atmospheric radiation budget?

Anthropogenic carbon or black carbon (BC), particularly soot, is a product of many human activities, a major one being incomplete combustion of hydrocarbons. The occurrences of soot are mainly in cities, although there have been observations of these aerosols occurring in sparsely inhabited, yet environmentally sensitive areas, such as polar ice caps.

As such, it is a critical component of atmospheric aerosols affecting the Earth's atmospheric radiation budget.

How much do anthropogenic carbon aerosols affect the atmospheric radiation budget?

For the purposes of the answer, anthropogenic carbon sources, will be referred to as BC (black carbon).

The effects of BC on atmospheric radiative forcing has come under considerable scrutiny in the past few years, several studies have sought to determine exactly the effect of this aerosol has on the Earth's radiation budget. A major study was performed by Bond et al. (2013), in the article Bounding the role of black carbon in the climate system: A scientific assessment.

A summary of the emissions and effects are shown in the image below: 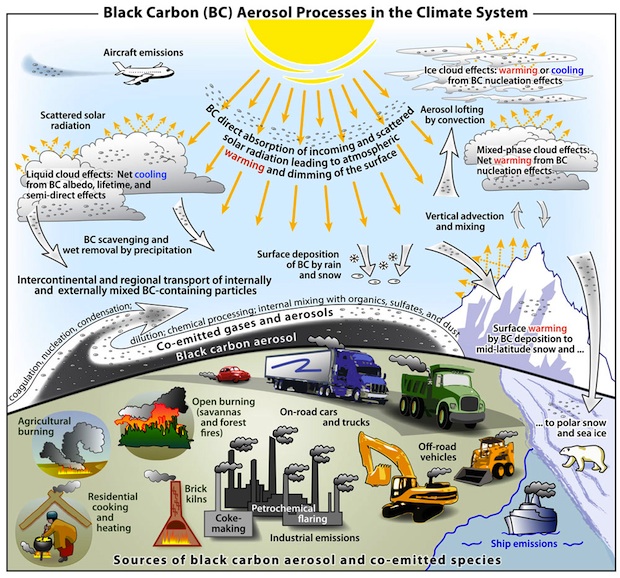 Caption: Schematic overview of the primary black-carbon emission sources and the processes that control the distribution of black carbon in the atmosphere and determine its role in the climate system. (Bond et al. 2013)

Their findings was that the total direct forcing of BC, independent of co-emitted aerosol species and including all sources (direct emissions, pre-industrial background, cryosphere and clouds) is +1.1 Wm-2 with an uncertainty range of +0.08 Wm-2 to +2.1 Wm-2.

This places BC itself as the 2nd most important anthropogenic emission, behind $\ce{CO2}$.

However, when the total radiative effects of BC with co-emitted aerosols, including organic carbon sources are taken into consideration, there is a slight cooling effect, with the total direct radiative forcing of -0.06 Wm-2, with a greater uncertainty range of -1.45 Wm-2 to +1.29 Wm-2. 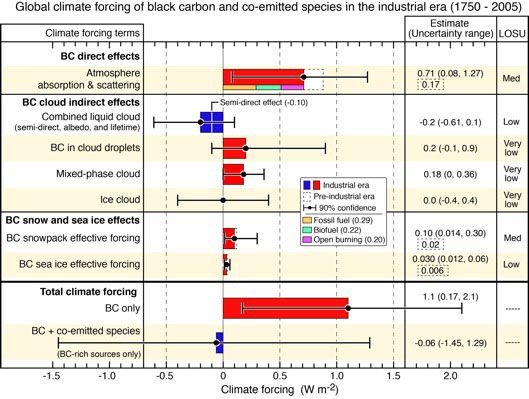 A major source for the uncertainties is described by Bond et al. (2013) as being due to a lack of knowledge of how black carbon and co-emitted species interact with clouds.

In summary, from the research that Bond et al. (2013) performed, the presence of black carbon itself causes a significant positive radiative forcing, but when considered with its co-emitted aerosols, there is a slight negative radiative forcing. However, the uncertainties calculated demonstrate that there are still mechanisms that are not completely understood.

Image permissions (from the linked article): This is an open access article under the terms of the Creative Commons Attribution-NonCommercial-NoDerivs License, which permits use and distribution in any medium, provided the original work is properly cited, the use is non-commercial and no modifications or adaptations are made.

34
How does anthropogenic heating affect global warming?
3
If we burn all carbon in the Earth's crust, by how much would the atmospheric concentration of $CO_2$ increase?
5
How much and what kind of radiation passes through a cloud?
2
How to design an experiment to quantify back radiation from atmospheric carbon dioxide?
3
What control the atmospheric lifetime of different metals in aerosols?
5
How to calculate the solar radiation at any place, any time
10
What are Atmospheric Rossby Waves and how do they affect the weather?
5
How to calculate the back radiation from greenhouse gases?