How and where do double-terminated crystals form?

How and where do double-terminated crystals form?

Most terminated crystals form by 'growing' out of a rock. Which causes one side to be flat,(or whatever the shape of the rock it 'grew' out of was shaped like), and the other side to be 'terminated'. Meaning that the one side has a natural faceted end.

Double-terminated crystals can from by crystallizing from a melt. The crystallization nucleus has to float freely in the magma chamber. As long as no other crystals obstruct the growth the crystal will grow in its own characteristic form (euhedral). This happens for example with feldspar crystals. (Example: http://www.erdwissen.ch/wp-content/uploads/2010/12/granit-feldspat.jpg)

If the crystal forms in a fluid cavity it can form double-terminations when it doesn't grow with the c-Axis normal to the wall. Sometimes crystals also grow with their c-Axis parallel to the wall (Example: http://wannenkopfe.strahlen.org/titanite.html). Probably super cooled pegmatitic melts also form free floating double-terminated crystals like tourmaline.

On the smaller scale (microscope and electron microprobe) double terminated crystals are pretty common in metamorphic rocks. Sections cut parallel to the stretching lineation (or the lineation which elongated crystals aligned themselves to) will show many porphyroblastic crystals with double-terminations. 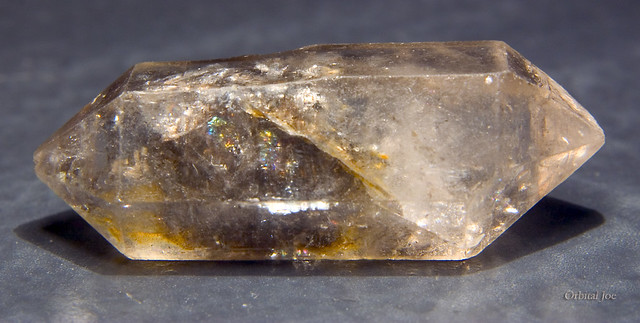 Why couldn't "evaporation" be a possibility here? We usually think of many igneous crystals forming during the cooling of magma, but evaporation too is a cooling process, we know. So if these molecules know how to arrange themselves from being in liquid form with say a wall of points growing out of a milky quartz matrix, for instance, why couldn't a much gentler and slower process of cooling happen with minerals suspended in water?

Back in the early 90s I spend a couple of days mining quartz points near Mt. Ida, Arkansas. I mostly worked on a single vein with two facing walls of large, optical-quality points growing toward one another. In between the two facing walls was packed about 6-8" that had filled in with a dense, rubbery red clay that had obviously settled into the vein over many many years and dried out. Suspended in that red clay at various points were, not double-terminated points, but tabular crystals that were not touching either wall of the vein, but had been apparently floating in their as it filled with clay-particle sediment. I have always wondered how they formed.

Thanks for the previous comments. I like the idea of a tiny nucleus begining the expansive growth into a double-termination, by contrast with the broad cooling of a wall of points, etc.

Not the answer you're looking for? Browse other questions tagged geology mineralogy minerals crystallography crystals or ask your own question.

23
Why do crystals, like quartz and diamonds, form in different colors?
9
What makes the conditions at the core/mantle boundary ideal for aluminum to combine with other elements besides oxygen?
13
Why does aragonite form in one case and an acetate in another?
7
How do hematite and magnetite form?
5
How does quartz form in calcite veins?
2
Where/how people find minerals
3
What kind of lava tube feature is Cleopatra's Grave?
1
How can I identify "tough" (mixed) granites?
2
Geode-like rock but it's empty inside. Why does this happen?
4
When diamonds "migrate" from deep underground to the surface, do they maintain pressure inside when there is no more pressure outside? If so, how?