Why does a subduction zone produce a serpentinization diapir rather than volcanism?

The classic Troodos Ophiolite in Cyprus has been uplifted by a 'serpentinization event'. Upper mantle (peridotite) has been serpentinized creating a buoyant diapir. This has uplifted the ocean crust sufficiently for it to be thrust over continental crust (underlying continental crust has been inferred from gravitational surveys).

The last sentence of the abstract of "Tertiary uplift history of the Troodos massif, Cyprus", AHF Robertson says:

The dominant driving force may have involved the liberation of water from a subduction zone dipping northward beneath Cyprus.

This makes sense - serpentinization is the alteration process of olivine -> serpentine in the presence of water. And, as we know, subduction slabs release fluids (primarily water) into the overlying mantle wedge.

These fluids usually promote partial melting leading to andesite arc volcanism. However, Cyprus has this big serpentinite diapir instead of volcanism. Why?

What causes the fluids from the subducting slab to occasionally result in serpentinization of the mantle wedge instead of partial melting?

First of all, your statement implies that volcanism didn't occur in Troodos. That is not true. Troodos was even referred to as "Troodos Volcano" once in Miyashiro's 1973 article about Troodos.

A geological map of Cyprus clearly shows that a large portion of the ophiolite is composed of lavas (volcanic) and dykes (sub-volcanic): 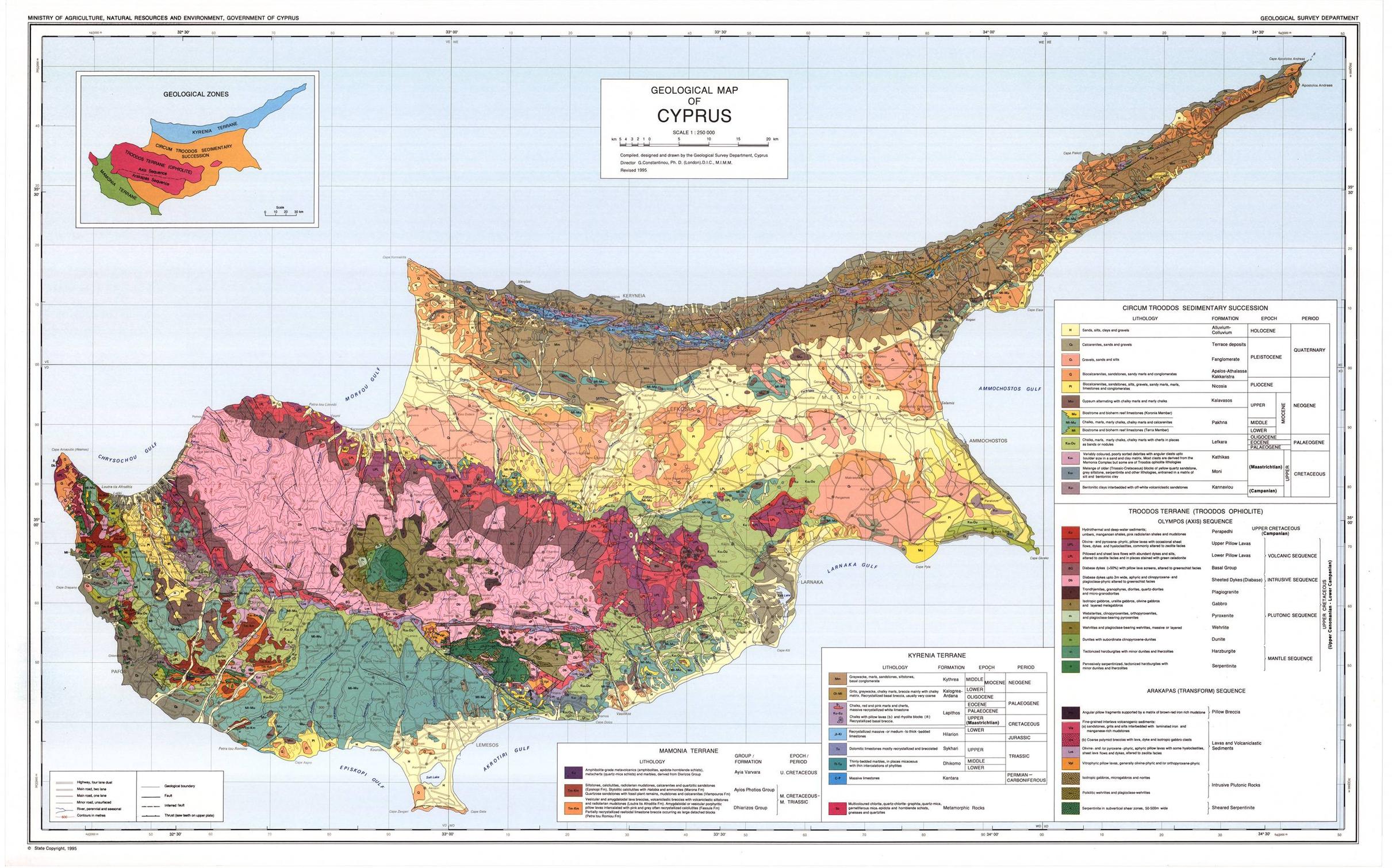 Note the red, brown and pink colors. This is however not the arc volcanism you were referring to but rather ocean floor volcanism in a spreading center setting.

As for your question, why there isn't any arc volcanism in Troodos, the answer is simply that it wasn't hot enough. Let's put the question of where the water comes from aside, and concentrate on what happens when water meets an ultramafic rock, which is what mantle rocks are. 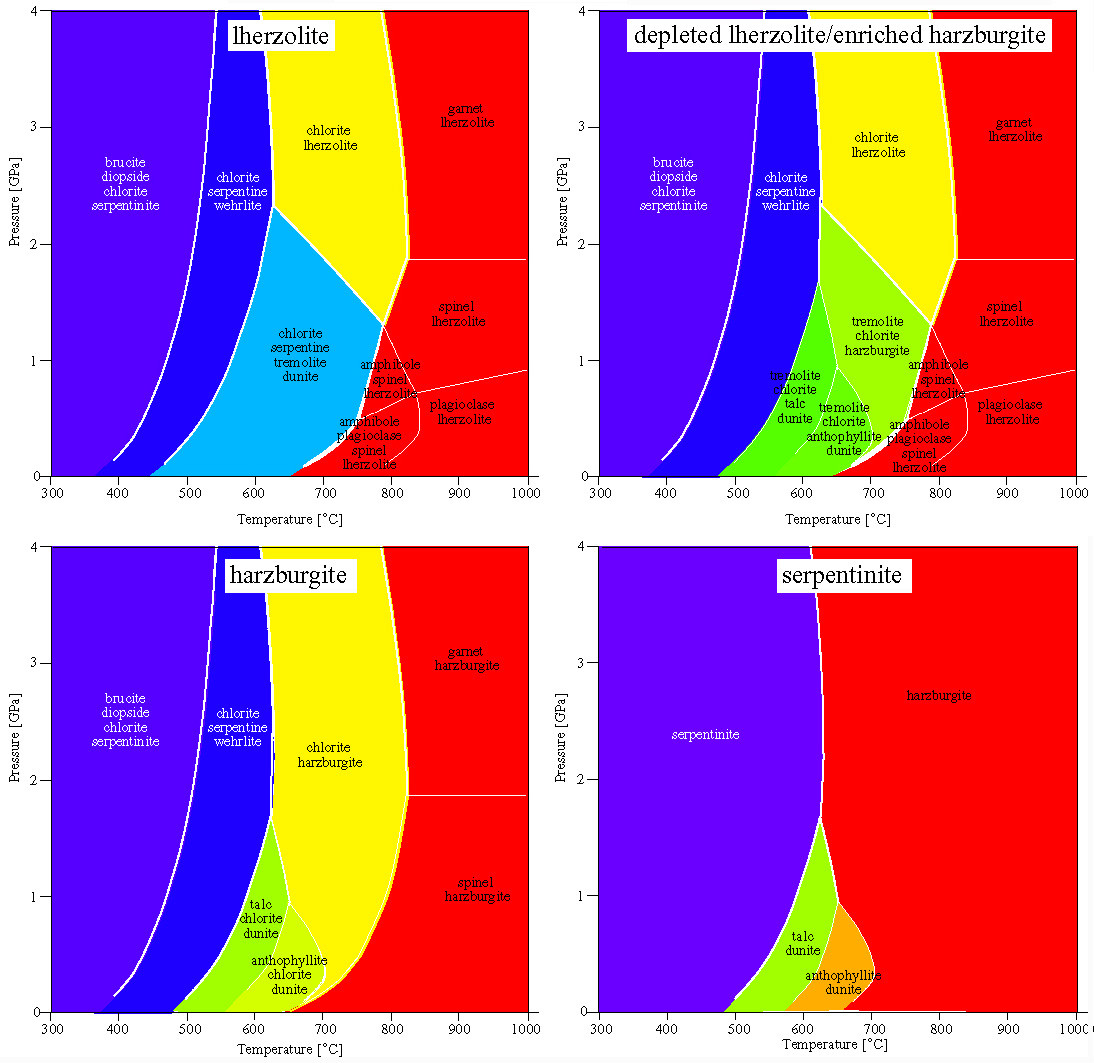 You can see that serpentine is stable at temperatures lower than 600°C, and even lower at (the more relevant for our case) low pressures. At higher temperatures serpentine is not stable anymore and the stable mineral is olivine (a rock forming mineral in lherzolite and harzburgite). Olivine is a dry mineral, so what happens to all the water? The water acts to lower the temperature needed to melt the mantle rocks.

You can see the dry versus the wet solidus (the temperature in which a rock begins to melt) in the following diagram.

There are several reasons that the mantle rocks in Troodos were "cold" enough for this to occur. First of all, you are talking about very shallow rocks, very close to the plutonic section of the ophiolite.

You can see that shallow mantle rocks are in the 300-500°C range. The arc volcanoes that you see in that figure are situated above the areas where fluids from the subducting slab can infiltrate hot (1000ish°C) mantle rocks. So you can use the Japan Sea as an analogue for Troodos in this case. Now, it is true that temperatures were likely higher because magmatic activity did occur in Troodos, but as Troodos was a slow-spreading center, the magmatic activity was rather sporadic and localized. The Nuriel et al. (2009) paper that Lanzafame refers to actually advocates the idea that Troodos was a core-complex. That is, the mantle rocks were directly exposed to seawater due to faulting, which both cooled them considerably and facilitated serpentinization.

The Troodos ophiolite is indeed a supra-subduction zone ophiolite. And it is reasonable to think that arc volcanism occurred somewhere, but the record is absent from the Troodos ophiolite itself. If you are interested, look up "a h f robertson" on Google Scholar and read some of his newer work. The article you cited is from the 70s and much research has been conducted since then.

After some brief research, serpentinite diapirism occurs due to deep penetration of seawater at temperature around 100-200$^o$C [1]. To the south of the rift that was forming the ophiolite sequence there was an oceanic plate subducting as African plate moved north. This subducting oceanic plate provided the seawater that serpentinized the harzburgite in the ophiolite sequence. From my understanding this removed the water from the system before it reached depths to form partial melt. The subducting plate also assisted in pushing the diapir to the surface through the detachment faults present from the rifting.[1]:http://earth.huji.ac.il/data/pics/Nuriel%20et%20al%202009.pdf [image]:http://www.moa.gov.cy/moa/gsd/gsd.nsf/dmlTectonic_en/dmlTectonic_en?OpenDocument

Not the answer you're looking for? Browse other questions tagged geology plate-tectonics petrology subduction or ask your own question.

35
Why is Earth's age given by dating meteorites rather than its own rocks?
3
Do tectonic plates "float" over the mantle and "collide" like icebergs?
8
How does a subduction zone form mountains?
8
Why is Earth's density gradient a step-function, rather than smooth?
3
Slab-breakoff - always connected to continent/continent collision?