Why does the meandering pattern of the jet stream itself propagate?

I wouldn't characterize the movement of the jetstream as a "less well known" problem, at least not to anyone who has sat through a synoptic meteorology class. The jetstream from a dynamic point of view is just an enhanced gradient in the heights on a constant pressure surface (or pressures on a constant height surface) and there are many factors the influence this gradient.

What we see here is in the mid-latitude storm track we have a series of highs and lows on the 500 mb surface (blues are low anomalies, red high anomalies). This particular pattern look to be wavenumber 7, This is a planetary rossby wave. If the weather was frozen in place and all external factors eliminated, the wavenumber is going to dictate how fast this pattern rotates around the globe. For low wavenumbers, this pattern will even move retrograde, but that is not something you see often (if memory serves, this is wavenumber 3 and lower).

You might wonder why I'm talking about waves at 500 mb when the polar jetstream is up a bit higher between 250 and 300 mb, varying seasonally. The pattern of highs and lows is evident throughout the troposphere. You can see it reflected in the surface pressure and in the image below you can see it in the 300 mb pattern. 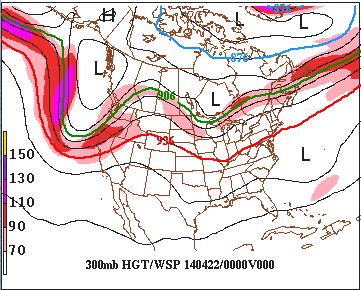 So far we've mentioned that the wavenumber of the planetary wave has an influence on movement of the pattern, but what about how the pattern evolves? There are a lot of factors here:

And perhaps the biggest:

Part of cyclone self development is a positive feedback between surface temperature advection and pressure changes at the tropospheric mid levels. As the cyclone matures the advancing surface cold front will correlate with low 500 mb heights and lower 300 mb heights. This response will perturb where the jetstream lies and indeed, the jetstream tends to lie over the fronts extending from a mid-latitude cyclone. If you conceptualize the fronts from one cyclone extending back and forward to the cyclones next to it, this is the "polar front" and gives you a rough idea of where the jetstream is.

An additional factor in how the jetstream propagates is the particular shape of the jetstream. There are a number of blocking patterns (e.g. Omega block, Rex block) that tend to persist as a stationary feature once setup.

Finally, remember that in an atmospheric column, pressure is just the weight of all the air above a height, and anything that can modify the column (e.g. surface heating, cooling, mid-level changes) can modify the 300mb heights and subsequently affect the positioning of the jetstream.