How to distinguish P, S, Love, and Rayleigh waves in a seismogram?

What features should I look for to determine each of these kinds of waves in a seismogram? What signal processing methods (filters, transforms, etc...) should I use to determine them?

There are two important ways to recognize different types of waves in seismic records:

Reconciling P- and S-wave reflections is one of the great problems in reflection seismology today. Everything is made more complicated by the fact that these waves can convert from one to the other. For example, when P-waves reflect from an elastic interface, like rock broundaries, some energy is converted into S-waves. Furthermore, some recording equipment is more sensitive to vertical ground motion than to horizontal (e.g. single component geophones), so our records are often strongly filtered. The result is that unpeeling multiple wave types is not easy.

You can automatically detect the P and S waves for an event but I don't know of a way to automatically extract the Rayleigh and Love waves directly from the seismograms.

As @kwinkunks points out things are complicated in the real world. Understanding an event is an iterative bootstrapping process that is best done by looking at recordings from several stations and preferably with multi-component recordings.

My experience is with regional scale earthquake seismology where the signal amplitude is also a powerful discriminator - the fast, low amplitude P wave arrives first. Then the slower, higher amplitude S wave comes in later. You can see this happening on the seismogram that you originally linked to or you can watch this somewhat relevant video of a dog.

To supplement the current and very good answers , we can look at a seismogram: 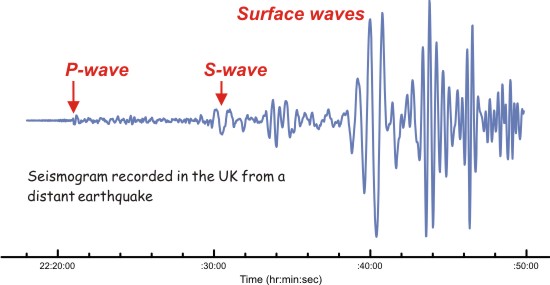 As you can see, we know that P-waves(compressional) will generally arrives before S-waves(shear). Also, in general, S-waves will arrive before the much stronger in response body waves. To distinguish which waves are which, we use a three directional seismometer, which will record three different seismograms: Radial, North-South, and East-West. Notice that all these directions are perpendicular to each other. The characteristic wave motion of the specific wave you are analyzing will cause stronger or weaker perturbations on each of the different directional seismographs depending on how the wave arrives. For example, if a shear wave arrives directly beneath a the seismometer, because of the wave motion, it will show up most on the East-West and North-South seismograms and less so on the radial seismogram where there is no deformation caused in that direction.

Suffice to say, there are a lot of factors and "tricks" that seismologists use to distinguish these waves from one another. Becoming a master at this takes years of doing this, and being good at this could also result in a very nice paycheck.

11
How do we determine subsurface composition?
20
What would a replacement for SEGY look like?
3
Detecting seismic waves using Software Defined Radio
3
How accurate are the resistivity values from the electrical resistivity tomography (ERT)?
2
Any site for monitoring equatorial oceanic waves?
6
What theories exist connecting volcano temperatures to eruption probabilities?
5
Using acoustics to measure the composition, density, and hardness of layers