Don't think of the Coriolis force as deflecting motion clockwise/counter clockwise, but to the right (NH) or left (SH), when looking in the direction of the motion.

A very simple sketch, with a low pressure in the centre, and higher pressure around it: 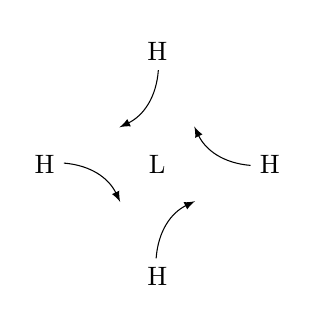 Another way of looking at this is through the equation for geostrophic motion. The wind around a cyclone is (nearly) geostrophic, so the equation of motion can be simplified to

where $f$ is the Coriolis parameter, $\mathbf{k}$ is the vertical unit vector, $\mathbf{v}$ is the wind speed vector, $\rho$ is density and $\nabla p$ is the pressure gradient.

So, looking at a sketch of a low pressure system on the northern hemisphere, the pressure gradient force will look like 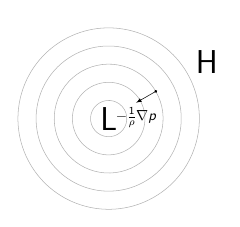 The gradient itself goes from low to high pressure, but the force has the opposite direction. To achieve a balance between this and the Coriolis term, we need this situation: 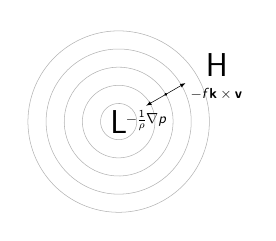 As $f$ is positive on the northern hemisphere, when we use the right-hand rule for cross-products, this means that $\mathbf{v}$ must be directed as 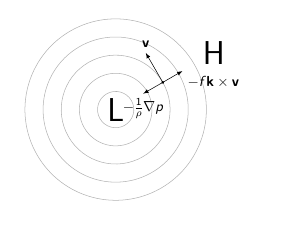 i.e., giving a counter-clockwise motion around the low pressure.

To correct your phrasing slightly: The Coriolis force acts to turn flows in the northern hemisphere to the right. This is not quite the same as "in a clockwise pattern", as will become evident in a moment.

Cyclones have a low pressure core and higher pressure outside. Therefore, the wind is flowing from the outside in.

When we think of a cyclone, we think of a fully-formed one that has a spiral pattern. If one sets out to draw a spiral from the outside in, and bears in mind northern-hemisphere Coriolis, one curves it to the right and ends up with a clockwise spiral, which is wrong: 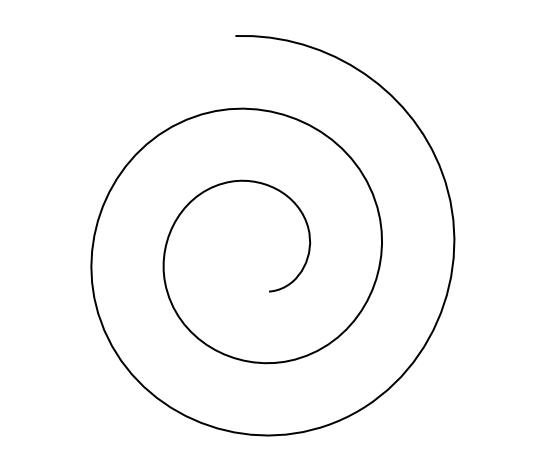 However, a cyclone doesn't start out this way. Instead, think of a low pressure area inside a higher pressure area, so that the wind is blowing towards the centre from all directions. Draw a number of radial lines to show this... and then curve each of those to the right: 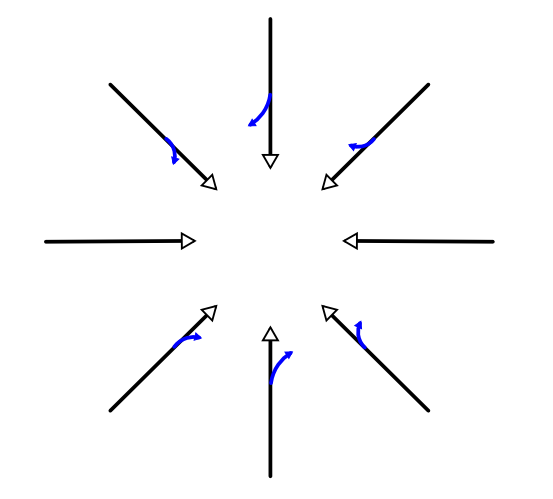 Note that the resulting circular motion (blue arrows) is counter-clockwise.

Now, AIUI a cyclone doesn't quite start out that way either, but I hope that this simplified approach explains how the "wrong" direction of rotation could be produced.

Not the answer you're looking for? Browse other questions tagged atmosphere coriolis cyclone or ask your own question.

-6
Is angular momentum preserved in a gastropod fossil?
1
What is the significance of amphidromic points related to tides?

18
Is there any simple way of using the Coriolis effect to determine what hemisphere you are in?
32
Why does Coriolis determine the rotation direction of a cyclone but not my drain?
7
Vortices in the Atmosphere Sustained only by PGF
4
Can Coriolis Effect cancel itself?
4
If a prevailing wind traveled due east in the Northern Hemisphere, would the Coriolis Effect act on the water?
7
Does the Coriolis Effect affect a wind from East to West?
3
Why is the pressure on the poles higher in Summer and lower in Winter?