Why does the El Niño Stop?

The reason for the initiation of the El Niño is unknown, but what is well known is how it progresses once initiated. The West Pacific warm pool begins to drift East, and the strength of the trade winds begins to decrease. In turn, the decreased trade wind strength further enhances the drift of the warm pool to the East, and this in turn further decreases the strength of the trade winds. It appears as though this forms a positive feedback cycle, so what is responsible for the cessation of the El Niño event? 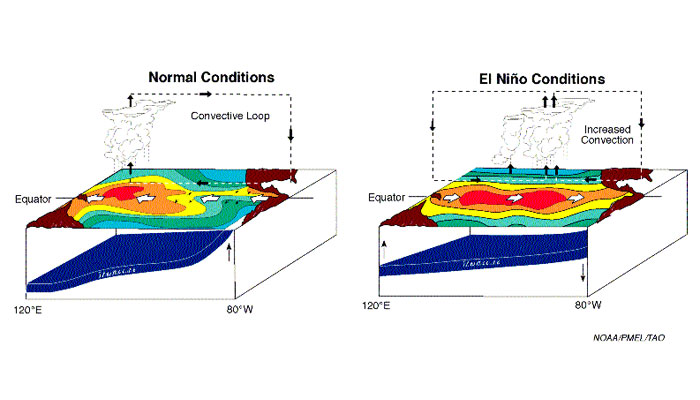 I think it is important to think of the El Niño as just one of the components of a large scale global atmospheric-oceanic phenomenon known as the El Niño and the Southern Oscillation (ENSO). ENSO takes shape as fluctuations of the rainfall, wind, ocean currents and waves. They are by nature very irregular.

The Southern Oscillation (SO) was first discovered by Sir Gilbert Walker who conducted seasonal averages for pressure and rainfall at a number of stations around the world. He found that a single spatial pattern was dominant where regions of high pressure in the central South Pacific Ocean and low pressure near Australia and India reverse and the highs turn into lows and the lows into highs. The SO is an atmospheric phenomenon, on the other hand, the El Niño is an oceanic process. Nonetheless, the interconnectedness between both phenomena is significant such that they cannot be considered alone, as pointed out by Bjerknes (1966). The combined action of ENSO is known to cause drought in Australia and the reduction of upwelling in the western coast of South America (which has disastrous consequences for nutrient delivery).

There is general agreement that one of the necessary ingredients for the initiation of the ENSO event is the reversal of the general equatorial Trade Wind pattern, an easterly steady wind due to a Walker cell. Westerly wind bursts spanning thousands of kilometers and acting over days or perhaps weeks at a time set off internal waves that transport energy westward and eventually poleward along the western coast of South America, some of that energy bounces off and radiates back east. See sketch below: 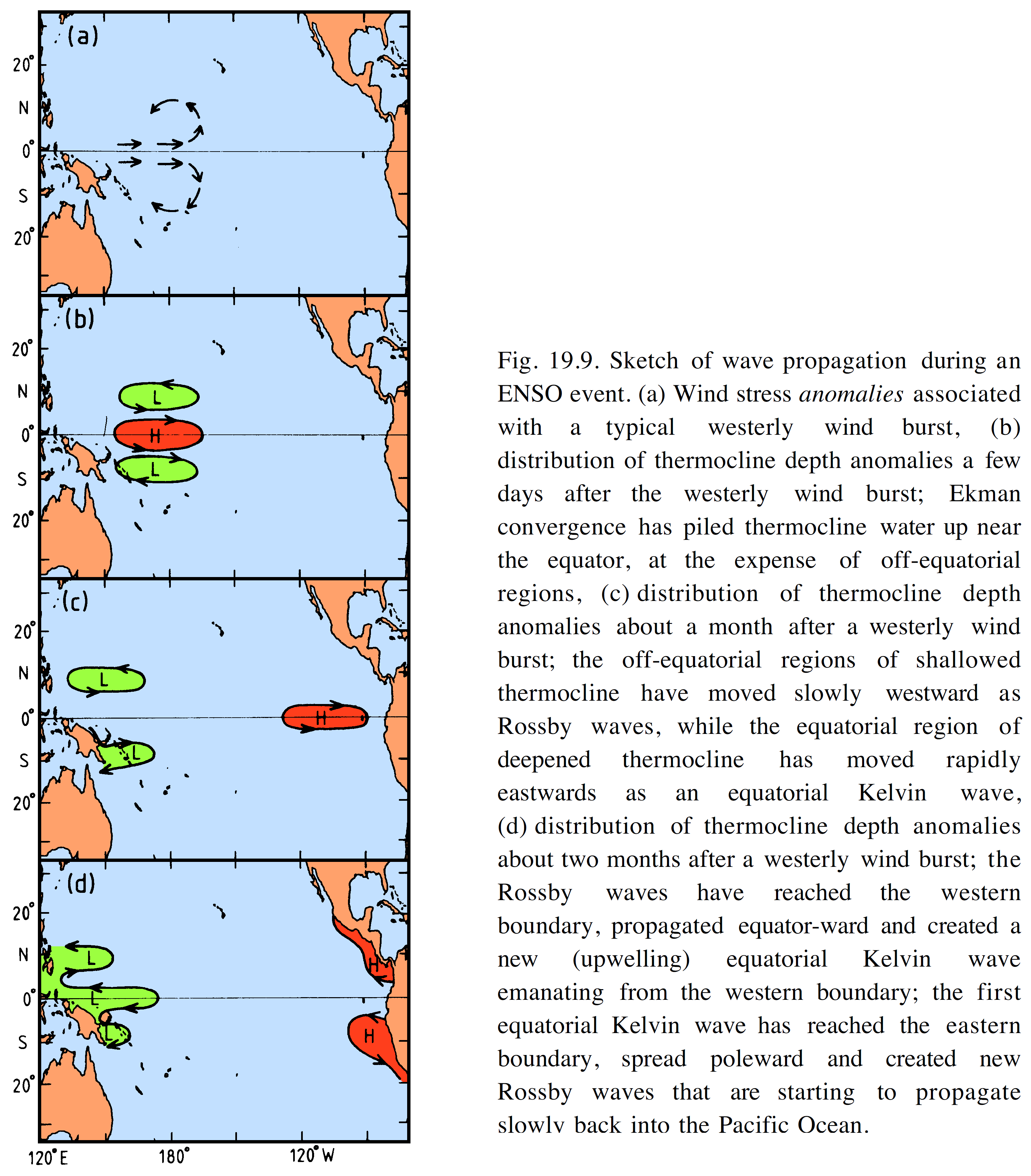 The equatorial isopycnal depression moves eastward along the equator as a Kelvin wave until reaching the western coast of South America relatively unchanged. These are shallow water waves so the speed is just $c = \sqrt{g'D}$ where $D$ is the depth and $g'$ is the reduced gravity, so they travel at about $c = 2.5$m/s plus 10-20% because they are literally advected by the Cromwell Undercurrent. They transport large amounts of energy over vast distances, depositing it far away from the generation zone in the western Pacific Ocean. Namely, after arrival on the east Pacific coast the equatorial Kelvin wave energy degenerates into two coastal Kelvin waves propagating poleward, and into new diffuse equatorial Rossby waves radiating towards the west Pacific. It is this removal of energy from the Western pacific through the development of these complicated wave motions and other more subtle processes that eventually brings an ENSO event to an end (chicken and egg?). Because the energy is removed, the SST drops, the trade winds resume thus ending ENSO.

I like the quote from the link in @DavePhD's answer:

"An El Niño event contains the seeds of its own demise."

As explained on slide 9 of Dr. William S. Kessler's talk

The warm water pool in the western (Asian) pacific drains eastward and toward the poles.

Not the answer you're looking for? Browse other questions tagged ocean climate enso atmospheric-circulation climate-models or ask your own question.

9
How do Rossby Waves in the ocean form?

9
Does El Niño increase the amount of heat that escapes into space, or does it increase the amount of heat trapped on Earth?
12
Why does El Niño enhance the jet stream?
28
Why does El Niño only exist in the Pacific Ocean and not the Atlantic/Indian Oceans?
8
How does El Niño affect thunderstorm/tornado/CAPE activity in the central United States?
14
What is El Niño Modoki?
15
What is the predictability of El Niño/La Niña?
4
Confirmation of historical El Niño events
4
Can El Niño/La Niña occur again after normal state?
3
Can El Niño and La Niña occur at the same time?