Why does the shoreline sometimes recede prior to a Tsunami?

It is well known among regular beach goers that a sudden shoreline drawback is often a warning sign for an impending Tsunami. My understanding of Tsunamis is they they form as a result of the seafloor abruptly changing, causing a local vertical displacement of water at the site of above the disruption, which initiates the wave. 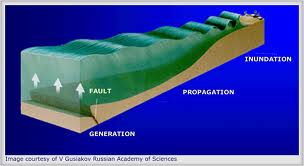 How does this process ultimately result in the shoreline often receding prior to the Tsunami reaching the coast?

It has nothing to do with the geological cause of the tsunami. Instead, it's a result of the way waves propagate. You can see the same effect on ordinary wind-generated ocean waves — the waterline draws back before each wave peak arrives and washes up the beach. Tsunamis are much bigger waves, in terms of both amplitude and wavelength, so the effect is more dramatic.

The particles in some surface waves, including wind waves and Rayleigh waves (a component of what is often called ground roll), have in a circular or elliptical motion — in the case of a wind wave the motion is clockwise if the wave is traveling from left to right (see this animated comparison for Rayleigh waves). The 'backwards' motion in the trough results in the drawback you are asking about.

Not the answer you're looking for? Browse other questions tagged ocean tsunami or ask your own question.

12
Why does every tsunami travel differently?
14
What causes waves to form the characteristic “breaking” shape as they approach the shoreline?
7
How was the atmospheric/oceanic circulation different prior to the formation of the Isthmus of Panama?
10
Mega-tsunami, what is the greatest possible height of a tsunami?
9
How does a tsunami affect biology and other matter in its path while in deep water
8
Why would a Martian tsunami travel at only 200 km/hour, four times slower than on Earth?
5
Depth of the wind-induced currents and the shoreline
5
Would epicenters in less-deep areas of ocean tend to reduce the impact of a resulting tsunami somehow (wave “breaks” before getting there?)
4
How much time is there between an underwater earthquake and the moment a tsunami hits the coast?