How would an icicle "grow" upwards?

The other day a friend of my dad's showed him a picture of an icicle that appeared to be "growing" upwards out of a crack in a sidewalk. There were no roofs, overhangs or vehicles parked near by... It looked like a stalagmite you would see in a cave. It looked something like this*: 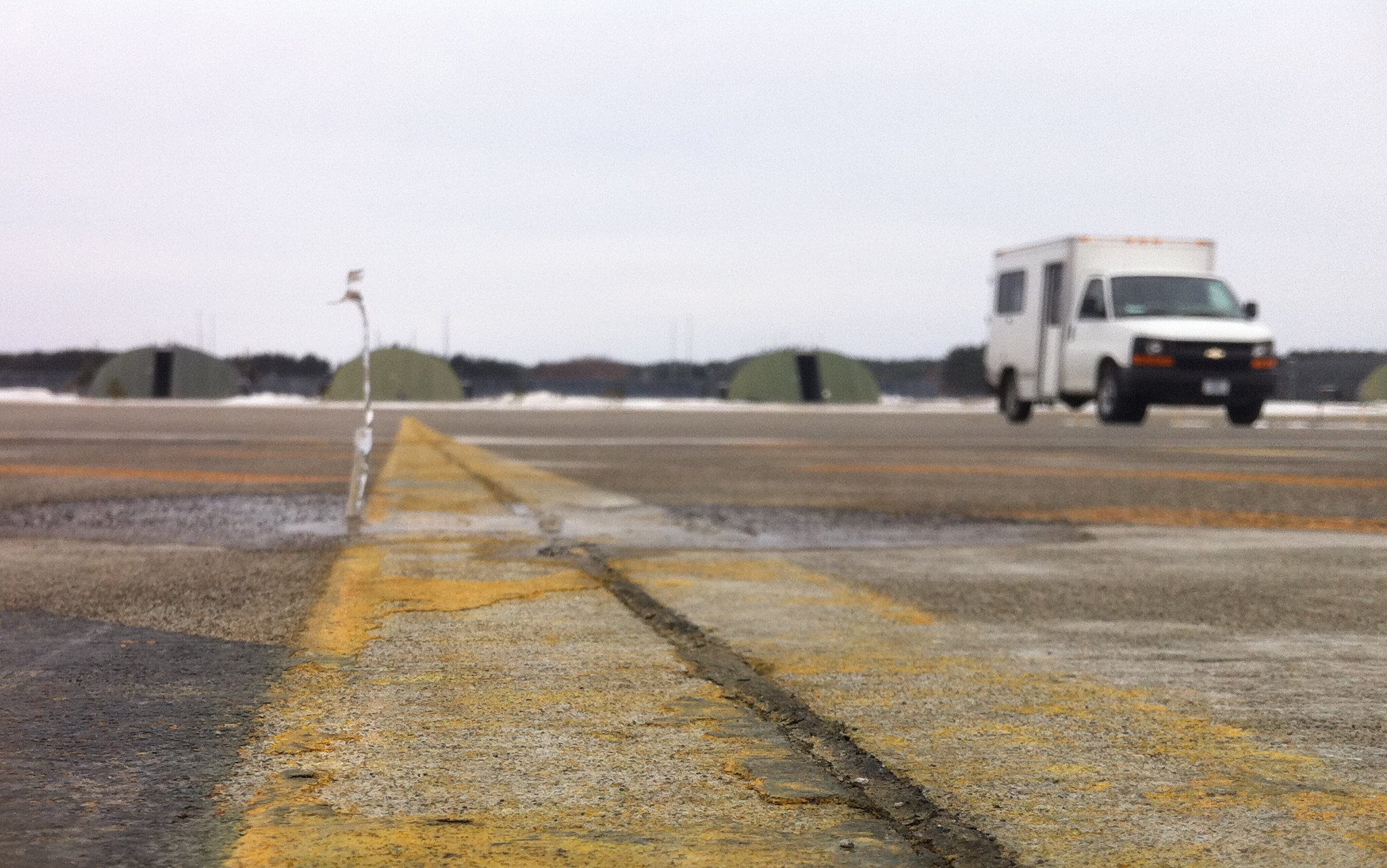 How could this happen?

* Note that this is not the actual icicle, I used this picture for an example.

If there is enough water underground, in a sealed reservoir (like under the concrete in the picture), as that water freezes, it will expand, putting pressure on what ever water is left unfrozen. That water will be squeezed out through what ever cracks it can find - in this case, upwards. Because the water is already near-freezing (perhaps even slightly below, if it's super cooled), it will freeze very quickly when it hits the air (which will be much colder than the ground, late at night). But if there is still water being pushed up from below, that ice will have to move out of the way (it's weaker than concrete). The friction of the flow of cool upwards might warm it just enough to keep it liquid, and the "stalagmite" will end up with a hollow core that the water is being pumped through, and that structure can just keep building on itself, until it is toppled by wind or gravity.

The picture is a bit grainy, but it looks like that's what's happened there. It also looks like the side of the hollow "stalagmite" has fallen off up the top, and released a bit of the remaining water (or maybe it just melted in the sun).

Edit: Hah, I knew I'd seen this somewhere before - in my freezer! This page describes how Ice spikes form - I basically got it right. It seems that they're more likely to form with de-mineralised water, and the temperature has to be within certain narrow limits.

Ice can grow up from the ground in the form of needle ice. The formation requires sufficient moisture in the ground. According to the National Snow and Ice Data Center (NSIDC) site needle ice can grow up to 40 cm in length. Needle ice are thin crystals of ice and has a very distinct look. A search on Needle Ice provides a wealth of examples of needle ice, note that all pictures are not relevant!

Needle ice can also form from plants if suddenly subjected to very low temperatures and where moisture in the plant has limited escape possibilities.

The picture in the post is, however, not needle ice, it is clearly a form of icicle. In fact the common icicle is reminiscent to a stalactite forming from a cave ceiling. Corresponding to the stalactite, a stalagmite forms on the floor. The ice form on the picture is a stalagmite form, created by water dripping from a structure down onto the ground in sub-freezing temperatures (credit to geotheory).

It's called an ice spike. Not fully understood, can form on any surface of frozen water. my curiosity was peaked when one formed in a cup of water in my car. Scientists can't really say why it happens yet.

Not the answer you're looking for? Browse other questions tagged meteorology glaciology ice or ask your own question.

9
In -20 °C weather, creeks below waterfalls here form ice columns. What are these called? Ice-canoes?

3
What is the life-cycle of agricultural water used to grow crops/animals?
5
How to find Cloud cover data in GFS grib models
5
Would the enthalpy of fusion for melting ice fields be a causative factor for colder winter weather?
6
If there's more water in the atmosphere due to global warming, how are there fewer mountain glaciers?
13
How to tell if fog is made out of water droplets or ice crystals?
5
How would Earth map look like if all ice melts?
2
Is a hotter climate making trees grow faster and have lighter wood?
5
How cold would the Earth have to be for the oceans to freeze entirely?