Every time I read a news article about Antarctic ice extent, I don't seem to have a clear answer as to what the deal is. If I look at the February sea ice extent from the National Snow and Ice Data Center (NSIDC), I get no trend that I can see:

If I look at the September data from NSIDC, then I get a clear increase. 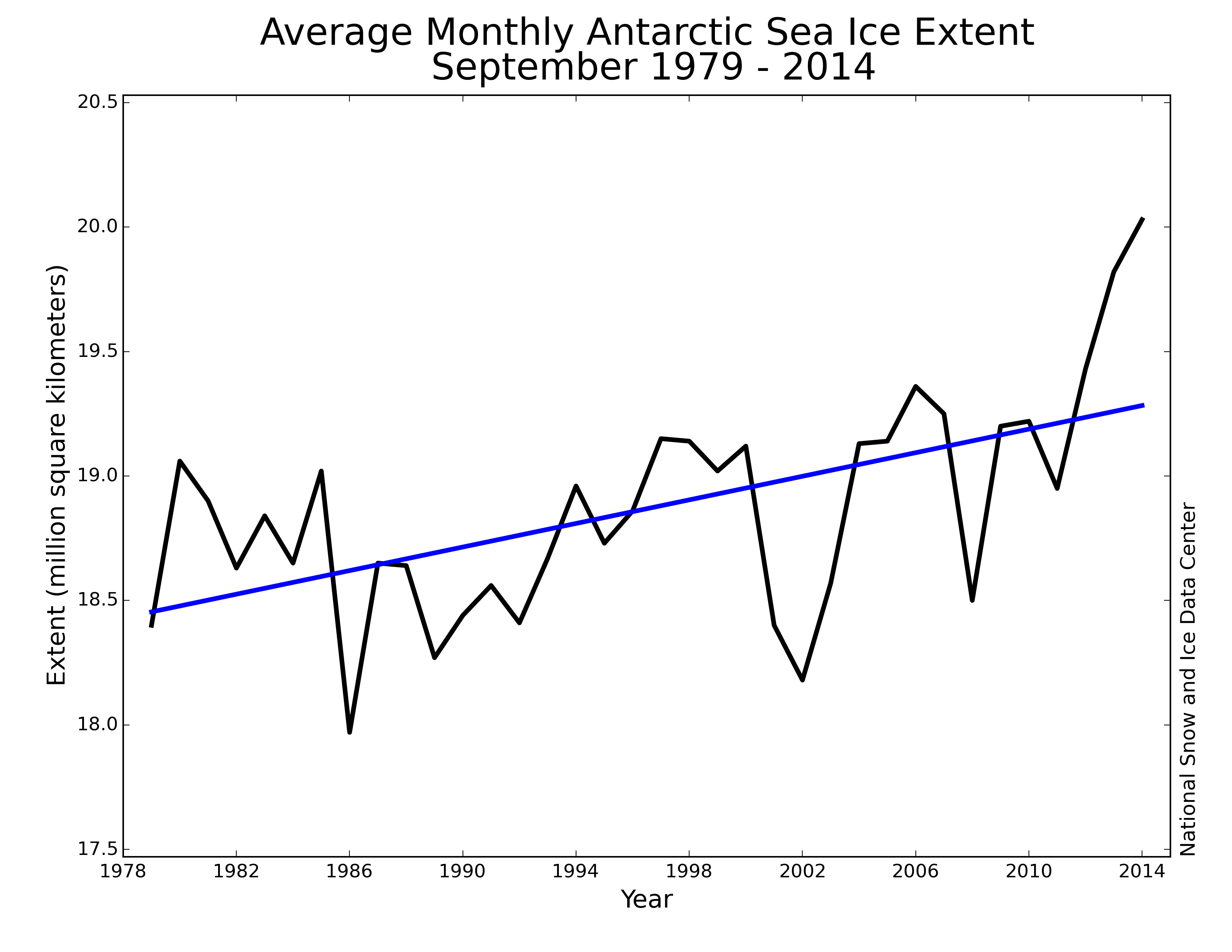 . NSIDC even tells you what the trend is.

Finally, if I look at the monthly values it is even trickier: 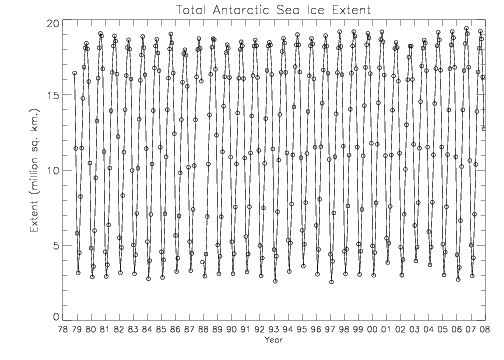 What I can tell is that the minimum extent seems to be unchanged, while there is an increase in the maximum extent. If I where to analyze the trend using all the data, I wonder if any significant trend would be extracted.

My questions are: Considering the level of variability in coverage, can the Antarctic sea ice extent be considered at "record levels"? If so, what is the consensus on the causes of this increase?

There have been a number of studies based on observations and modelling of the Antarctic Sea Ice trends. One major observation is that since continuous satellite coverage began in late 1978 (3), there has been an increase in annual Antarctic sea ice extent (1)(2)(3)(4), that reach ~28% of the Arctic sea ice loss (1).

Critically, according to Simmonds (2015) (1) (and Fan et al. 2014 (3)), that despite interannual, sub-decadal and multidecadal variations, there is a statistically significant increasing trend in sea ice extent for all seasons since late 1978 (As shown in the image below). 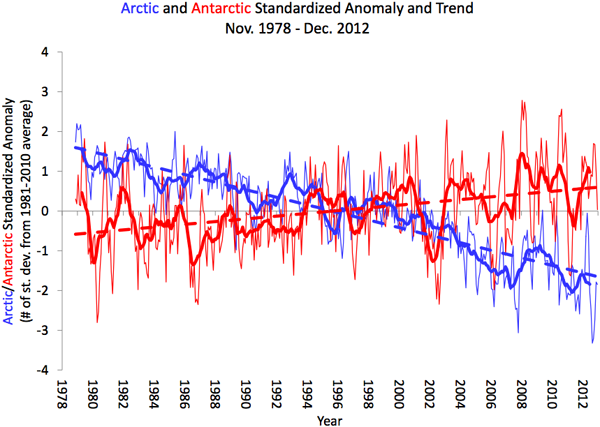 Essentially, the sea ice extent annual trend is at record-levels since records began with continuous satellite coverage (from late 1978).

As to why this trend is occurring, there is a considerable amount of uncertainty (1)(2)(3)(4), particularly in reconciling modeled sea ice with the extent observed (1). Simmonds (2015) (1) suggest that this could just be a consequence of the different dynamics between the Arctic and Antarctic - i.e. one model does not fit both ice caps.

Observations documented by Fan et al (2014)(3) indicate that since 1979, there has been a decrease in sea surface temperatures (SST) and surface air temperatures around Antarctica, with the exception of the Antarctic Peninsula and surrounding seas. The trends indicate that in the southern summer (December-February) there is a trend of SST dropping by 0.6°C corresponding to a 9% increasing trend in sea ice extent during the same time - this is also noted by Simmonds (2015) (1) as being the greatest trend in sea ice extent. This is accompanied by intensified westerly winds and a strengthened meridional sea level pressure gradient, both in the southern summer and in the annual mean.

Fan et al. (2014) (3) suggest that there is evidence for a multidecadal climate variability regime occurring in the region - this stands to reason considering that the time of observations of sea ice extent has only been ~35 years.

There have been several theories suggested in the literature, below are a few of them:

In my survey of sea ice extent for the same period (1979-2015) I found that the apparent positive trend in dispersed sea ice in the Antarctic in September is anomalous and possibly spurious for two reasons: (1) there was no trend in concentrated sea ice extent or in the degree of sea ice dispersion, and (2) the residuals of the OLS trend line showed patterns that might violate OLS assumptions. Please see http://papers.ssrn.com/sol3/papers.cfm?abstract_id=2598152

Not the answer you're looking for? Browse other questions tagged glaciology antarctic sea-ice or ask your own question.

15
Naming convention for sea ice thickness per unit area of ice or ocean
9
Is the Arctic sea ice volume increasing?
22
Is there any explanation for the large amount of sea ice around Antarctica in 2014?
17
Can earthquakes contribute to Antarctic ice loss?
18
Is this 70km crack in an ice shelf of Antarctica remarkable, or a regular occurrence?
8
The giant 6,000 km$^2$ iceberg A-68; will ground-truth telemetry supplement satellite tracking data?
14
What is likely to have happened with these newly discovered antarctic volcanos below the ice?
5
Why antarctic research stations are built above ground instead of on the ground or underground?
5
Is the Arctic sea ice disappearing in a linear or non-linear way?
22
How does global-warming-triggered ice melting cause global sea levels to rise?