How do we use oxygen isotopes as temperature proxy?

As far as I know scientists use oxygen isotope 16 to 18 ratio in air trapped in glaciers (or in old foraminiftera shells) as proxy for temperature in the past. I know that $\ce{^18O}$ is heavier, and it precipitates faster, and $\ce{^16O}$ is lighter, and it evaporates faster.

I understand that when it's warmer, there is more evaporation and more heavy isotope left in water. Vapor moves toward poles, where it falls as rain or snow and goes back to water (this doesn't count) or stays in glacier for hundreds of thousands of years.

On the other hand, when it's cold, precipitation occurs earlier while air moves to the poles, and heavy isotope falls down earlier, on bigger latitudes. In the air that goes to the poles there is only little heavy isotope left. So more $\ce{^16O}$ (and less $\ce{^18O}$) in glaciers -> cold period. This is contrary to the above. So how to figure out temperature from ice and sediments cores?

This is somewhat a general answer. According to the Royal Chemical Society webpage Chemical climate proxies (Evans, 2013), the rarer and heavier $\ce{^18O}$ isotope in water generally evaporates after and condenses (and precipitates) out earlier than the lighter and more common $\ce{^16O}$ isotope, shown in the diagram below: 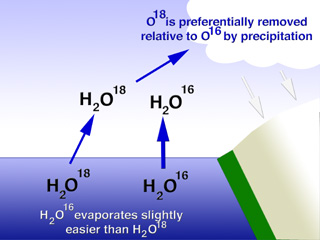 Source: University of Michigan's page Past Climates on Earth 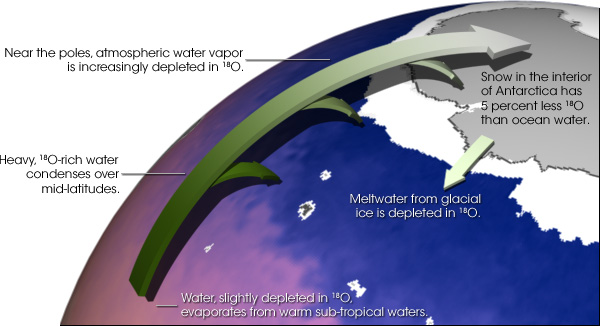 Not the answer you're looking for? Browse other questions tagged paleoclimatology sedimentology glaciology or ask your own question.

19
How do we know that we are NOT in an “Ice Age?”
10
How was the Marinoan Glaciation triggered?
13
Converting glacier volume to mass: what ice density to use?
7
Oxygen isotope ratio and Glaciers
18
Is this 70km crack in an ice shelf of Antarctica remarkable, or a regular occurrence?
2
How many extreme shifts in climate has Earth gone through in its existence?
7
How are sand blocks formed?
5
Why did the carboniferous period have so much atmospheric oxygen?
39
How it's possible to measure temperature 2000 years ago with such precision?