Where does the water from rain in rain forests come from?

When discussing a hypothetical world without oceans and just forest it occured to me that I wasn't so sure there would be any rain in the first place, due to the lack of oceans. Searching on Google however I found out that trees transpire a whole lot more than I thought, but I was unable to find a run down of how much water in rain forest rains come from the oceans and how much comes 'directly' from the rain forest itself.

Leaves, mostly. Photosynthesis requires carbon dioxide, and it gets it via stomata - small controllable pores in the leaf. When the stomata open, water goes out, because the air is generally drier than the interior of the leaf. Water in the leaves is drawn up from the roots, via the xylem, using the suction from the lost water in the leaves, and also acting as a capillary.

So, for Earth, the land is something like an sixth of the total evaporation. Keep in mind that that includes desert areas. A rainforest planet would have significantly higher evaporation than that, per square meter. For example, Malhi et al. (2002) calculate evapotranspiration over the rainforest in the Amazon at 1.12 my$^{-1}$. That is much closer to ocean rates than average land rates.

Plants sweat. It's called transpiration. . Nearly 90% of this water exits the tree in the form of vapor through small pores called stomata on leaves. Atmospheric circulation moves water vapor around the globe, but oceanic evaporation meets most of it. It accumulates and falls as rain, which plants absorb, in high heat, they plants release water to dispose of heat and it accumulates again. COllecting to afix new humidity which fall as rain once again. 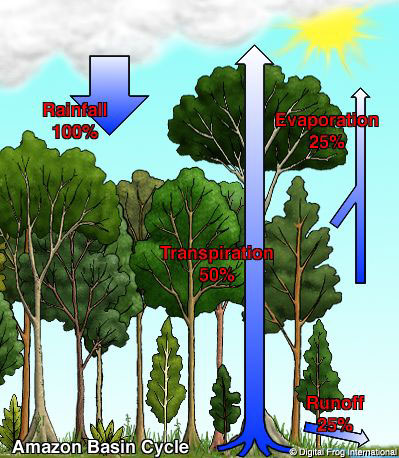 Not the answer you're looking for? Browse other questions tagged water land-surface forest water-vapour or ask your own question.

14
How much water is the atmosphere losing to space?

3
What is the life-cycle of agricultural water used to grow crops/animals?
6
What keeps water from sinking into earth?
4
Where does all the salt come from in the Dead Sea?
5
Why does the loss of water from a felsic magma encourage crystallisation?
2
Does water affect radiometric dating?
8
Where to find reliable water temperature?