Is it possible for rivers to freeze completely and stop flowing?

Is it possible for rivers to freeze completely in the winter and stop flowing? Are there known examples of this? If yes, how large can these rivers be and where does the water go?

There are several large Siberian rivers that empty into the Arctic Ocean.

I am interpreting your question as referring to rivers with flowing water freezing as as opposed to glaciers, which are already frozen.

Under current climatic conditions, small rivers can freeze throughout: from bank to bank, surface to river bed. I'm avoiding using the word solid as some people use that word when a river's surface has frozen from bank to bank.

Large rivers do not freeze "through out" because,

Water, ice, and snow are good insulators and poor conductors of heat. The portions of a lake or river that are exposed to the cold winter air will freeze into ice and this ice insulates the water below from further rapid freezing. Also contributing to the prevention of bodies of water freezing solid is an interesting characteristic of water. Like most other forms of matter, water become denser as it cools, but beginning at about 39°F (4°C) something odd happens - water begins to lose density as it gets colder, becoming least dense when it freezes into ice. This is why ice floats. As water becomes colder it rises to the top, eventually freezing to the layers of ice that are already there. Insulation of the water beneath is increased as the ice thickens so cooling of the water beneath slows.

From The Great Land of Alaska: Why don't lakes and rivers freeze solid?

Also, while water is flowing its potential energy is constantly being converted to heat energy that resists freezing on the molecular level and subsequent crystallization.

In a way, glaciers are just like frozen rivers. A good start on that topic comes from USGS. Ice (whether in a frozen river or in a glacier) is still a fluid and thus is always moving because of its own weight. A frozen river will still be a river of incredibly slow moving water.

When water is not moving, first the entire volume cools down to 4C (maximum density) as the colder water keeps sinking to the bottom. Then, a thin layer at the surface starts to freeze while floating on the denser water below. By contrast, in moving water, the entire volume has to cool to 0C before freezing starts.

For any river to freeze, heat must be lost at a rate that exceeds the rate of replacement. Because of the high heat capacity of water, fast moving water (e.g., mountain cascades) will be more difficult to freeze because heat loss will be smaller than flow rate. Thus, slow moving small streams tend to freeze quickly.

On the North Slope of Alaska, I have seen lakes that are frozen all the way to the bottom. It's a fascinating site in the spring when the lakes thaw from the top down because the ice on the bottom of the lake is glued to vegetation and sediments (see picture). Around these lakes are small, narrow rivers called "beaded streams." In the winter/early spring, these streams are either dry or have running water. I don't believe (for all the reasons listed above) that there would be a completely frozen river. Any portion of a river that would be small enough with the potential to freeze completely, would likely dry out before the winter (although the ground all around the river is frozen... permafrost). And any "river" that became standing water, would be classified as a lake, slough, or backwater area.

However, a solution for you may be to check out Alexandra Falls in the Northwest Territories, Canada. The falls are pretty huge and freeze over in the wintertime! 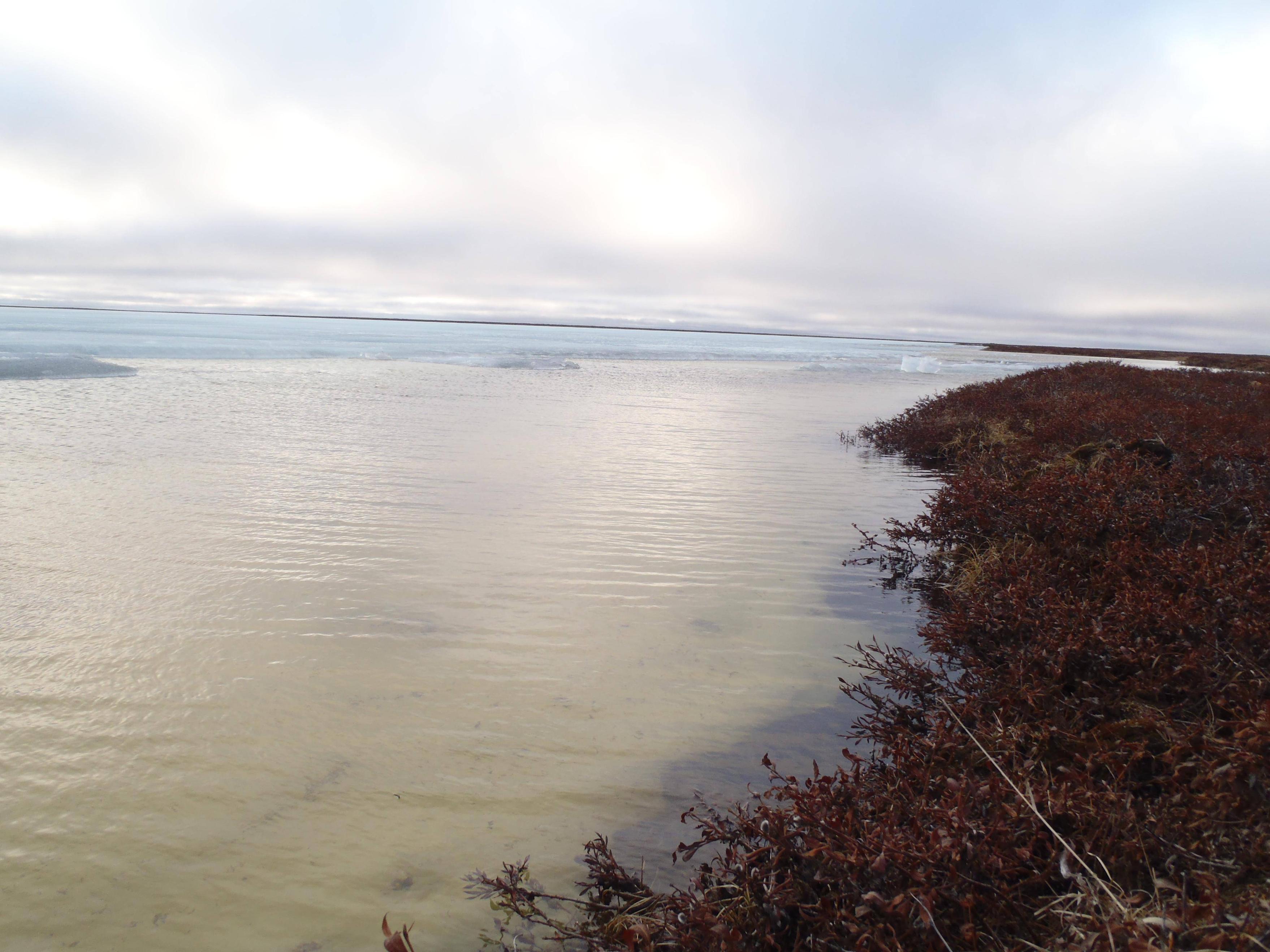 I just want to present a visual representation of Fred's very detailed technical answer. In my country right now the Himalayan ranges are in the midst of a cold wave and the Chandra river(tributary of the Chenab)has frozen partially in the higher Central Himalayan valley of Lahaul And Spiti

A completely frozen river is equivalent to a glacier

So the answer is yes

However. Could play a definition of words in time and space game with this question. When the river is completely frozen it is not a river anymore.

In that case the answer is no

Not the answer you're looking for? Browse other questions tagged temperature rivers water or ask your own question.

49
Why is the pond in my backyard not frozen when it is -15 °C (5 °F) outside?
7
How do perennial rivers in high alpine areas maintain year round flows?
11
What is the temperature of the flowing water in icy river?
2
Do ice crystals form in running super-cold water?

26
How can the following equations for meandering rivers be theoretically obtained?
13
Do rivers/creeks flow underground when they dry up at the surface?
2
Do ice crystals form in running super-cold water?
3
Is it possible to have an AR(0) for streamflow?
11
What is the temperature of the flowing water in icy river?
16
Where do rivers like the Rio de la Plata end and the ocean begin?
4
Classification of rivers according to width
9
Is there a special name for along-course elevation profiles of rivers, and where you can you find them?
1
What term to geologists use to refer to several rivers constrained to a particular area?