What are these lake-like blue patches in the desert, visible in satellite image?

I found some blue patches in the Arabian desert in Google Earth. It looks like as if they were lakes with sand dunes rising out of the water. But there isn't water in the desert, at least not this much, or is there? So what do we see on the image? I realize that the colour we see in the image may not be accurate. 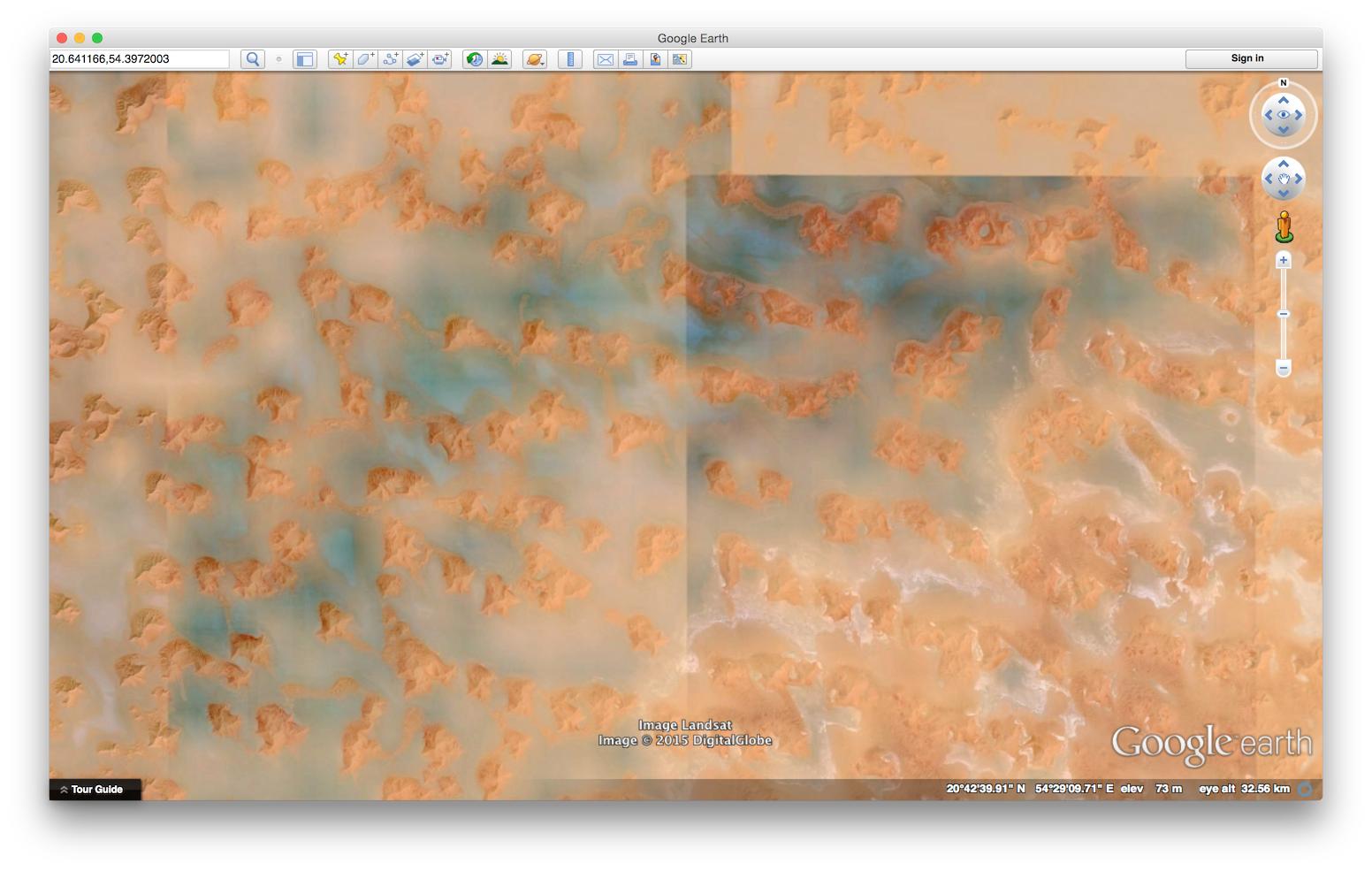 I took some time to browse Landsat archives and see if things are changing. Here's a comparison of the same region on two different days (note the different dates, about 1.5 months apart). The comparison shows that things are changing, i.e. it doesn't permanently look like this. Most of the time it's like the first image. This is not the exact same area as above, but it's "nearby". 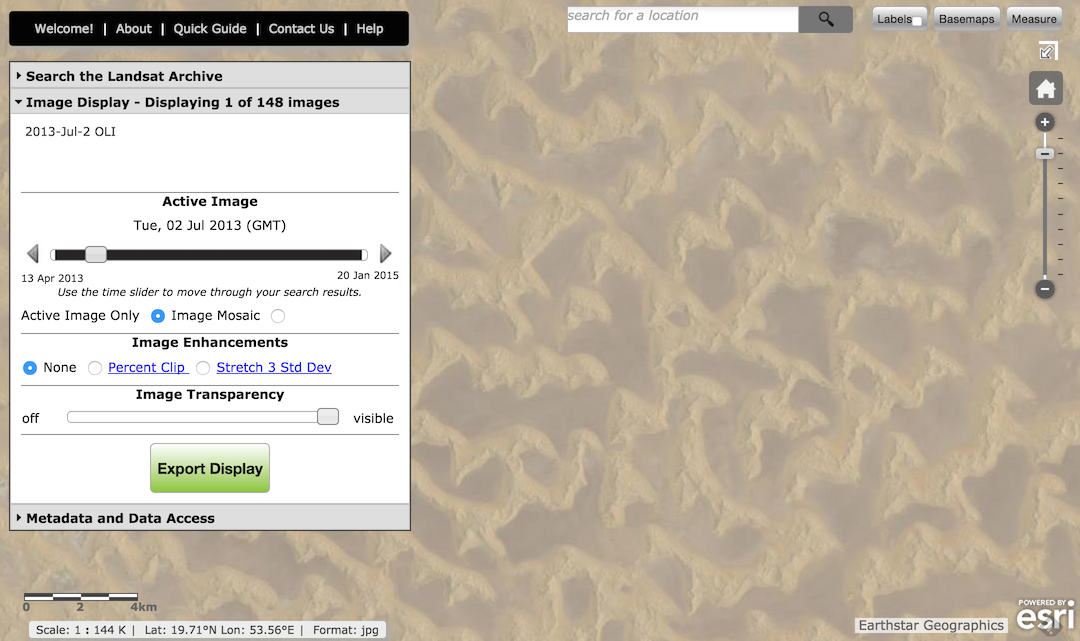 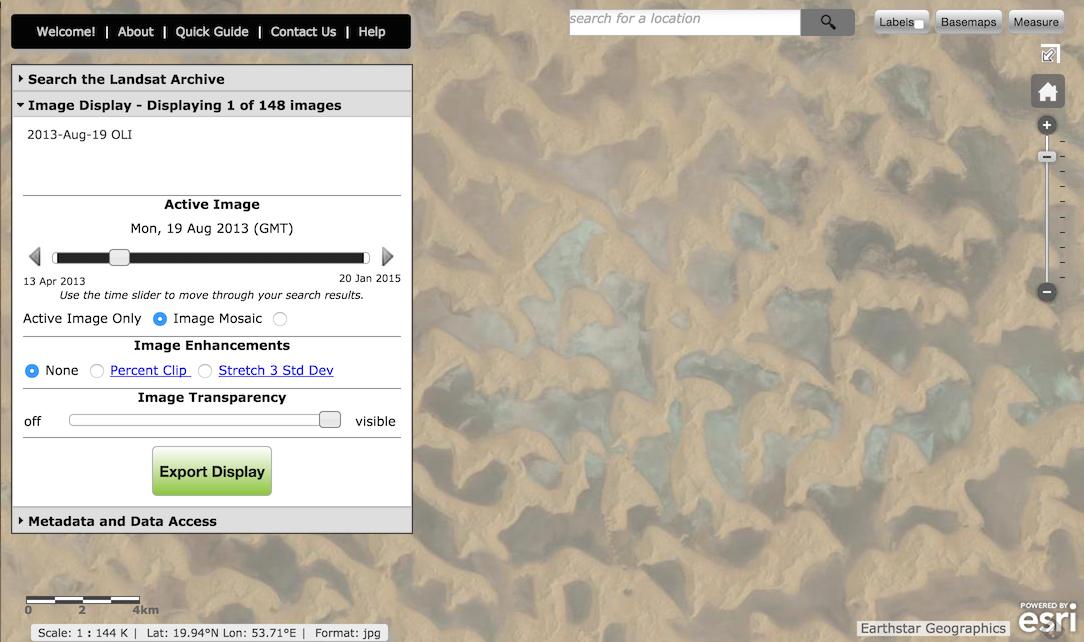 Are there satellite images freely available taken at wavelengths that can clearly show water?

Update 2 Here's some daily MODIS images from the same time as the two photos above, I'm not really sure what to make of them though. See the clouds passing through 2013 Aug 3-4. The precipitation layers in the same tool do confirm rain during those two days.

Update 3 Yet another image showing more clearly what looks like lakes. Click for description and full-size image showing larger area. This is the eastern part of Rub' al Khali. 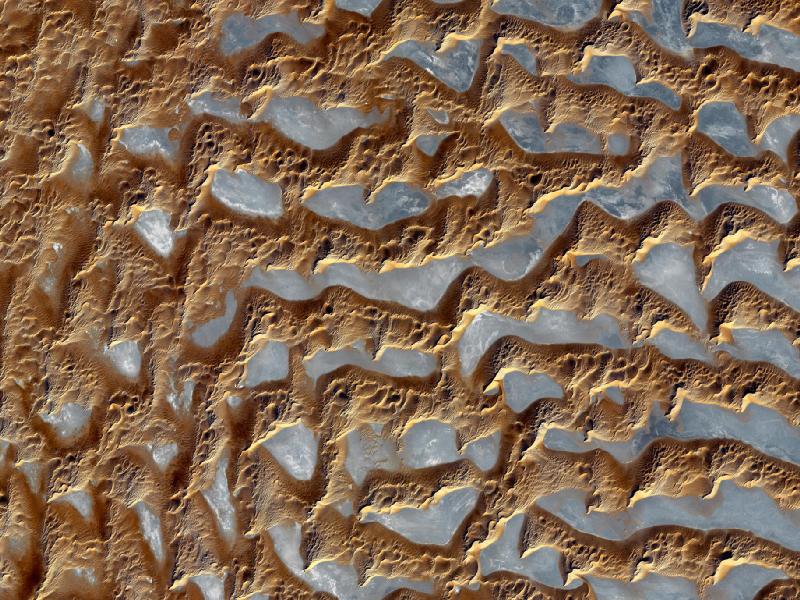 Update 4 These are likely old and dried up lake beds. Mention on Wikipedia. Quote from article:

All that remains of the lakes are their eroded basins, standing up in forlorn little buttes a meter or so high, in stark white or gray against the Rub' al-Khali's infinity of rusty-red sand.

It doesn't explain the bluish colour, but it's likely these dried up lake beds that I see on the images.

The 'bluish' areas are exposed gypsum and gravel across which the sand dunes are moving. The colour is likely an artifact of the 'natural' colour palette used when processing the SPOT image. To understand just how arbitrary and variable the results of that processing can be, consider the following image captured at a fairly high zoom level in one of your 'blue' areas: 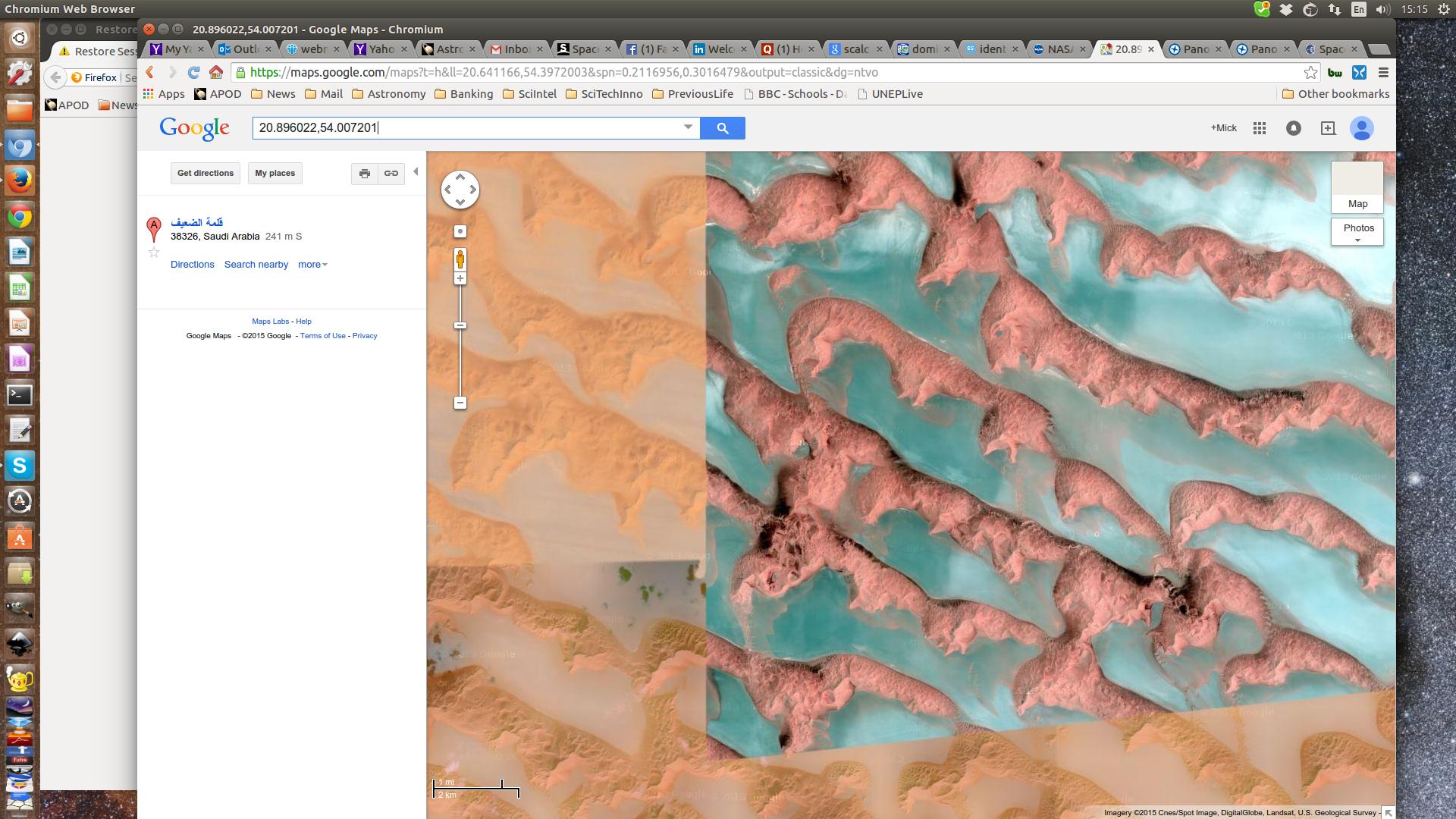 Meanwhile just to the south-west, there is at least one identifiable lake (at 20.896022N ,54.007201E, perhaps an up-welling of ground water, possibly transient and apparently highly saline, judging from the lack of vegetation around it) and, as you can see here.... 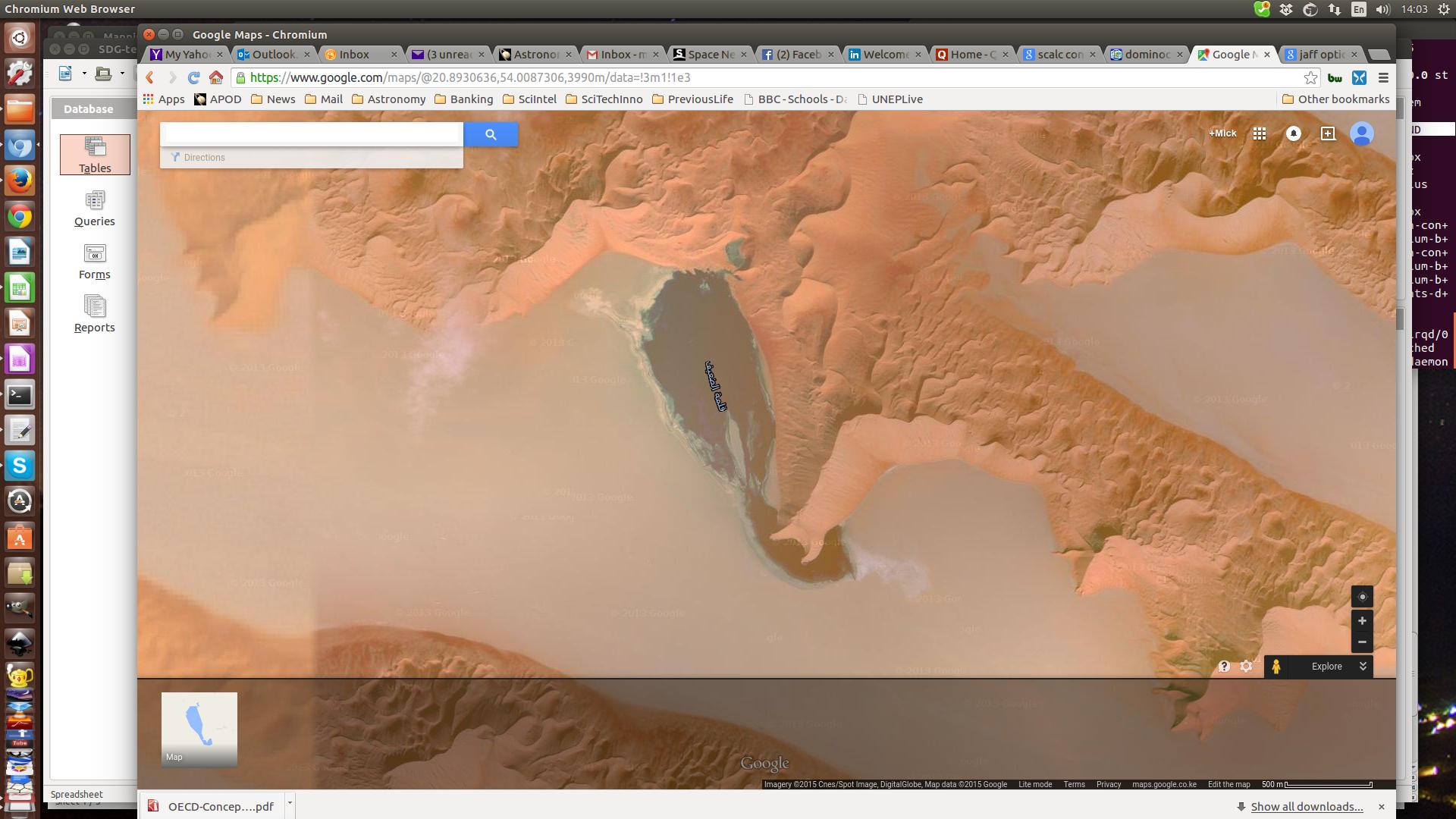 it has an entirely different appearance to the blueish areas you've identified.

I suspect that the image is due to 'bubbles' of hotter air in the valleys inter dunes. They have a different IOR (Index Of Refraction) then the surrounding areas and the light path deviates from the 'straigth' line trajectory. In addition the light path length between the bottom of the valley and the equi-IOR plane above is larger than the one from the top of the hill to the same plane and the amount of deviation is proportional to the path length. This atmospheric effect can appear in the absence of wind and in hot days.
The center of the valleys are hotter then the top of the hills because light is reradiated from the surfaces and more surface amount is pointing to the central volume, the same as with parabolic antennas.

Not the answer you're looking for? Browse other questions tagged geomorphology desert or ask your own question.

7
What produces these distinct shapes in the Rub' al Khali seen from space?

19
What would be the effect of bringing seawater pipes to the Sahara desert?
9
Large scale structures in the Sahara – what are they?
7
What produces these distinct shapes in the Rub' al Khali seen from space?
2
What are these features in the Tombouctou Region?
12
What causes these mound-like ground formations?