How are critical loads of nitrogen deposition on eco-regions determined?

Natural habitats have a "critical load" threshold in regards to deposition of nitrogen compounds (both wet and dry deposition). The critical load is calculated in kg N / hectare and is specific to local ecoregion type. I've heard that critical loads are based on lichens or other simple vegetation, but I'm not sure. How are critical loads calculated? What are the factors that are considered?

An example of critical loads are shown below for the western USA. In general the ecoregions are pretty coarse and in my mind over-generalized. I'm curious about how these ecoregion distinctions are made. How many types of ecoregions are there and what are they based on?Is it based on the vegetation that currently exists in that area (which can sometimes be distinctly different than indigenous vegetation)? Or is it based on some historical vegetation type? Furthermore, what is the expected result if deposition surpasses the critical load and what is the time horizon involved? 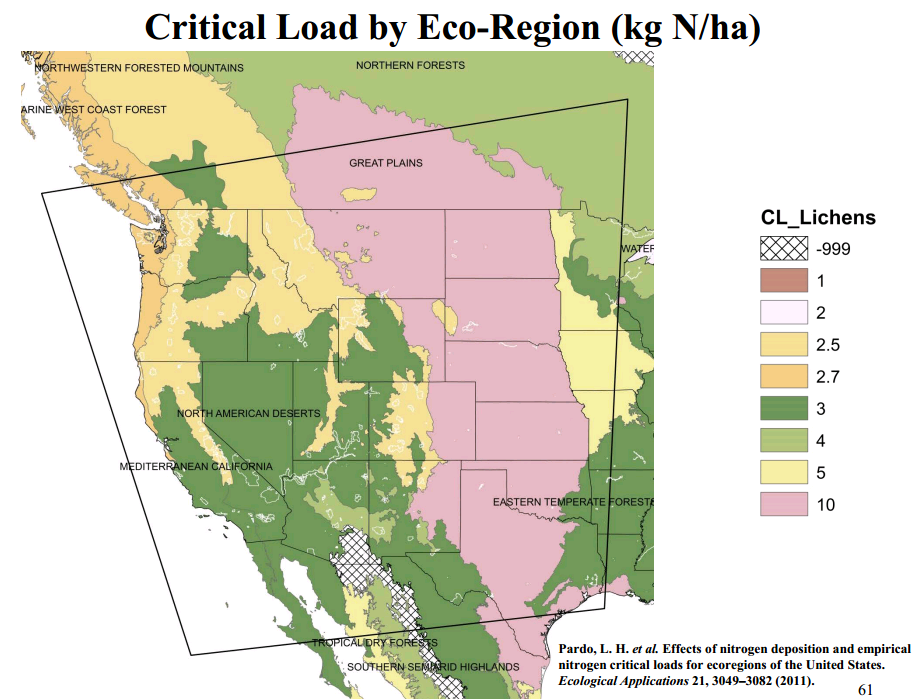 These two links were the sources I used when researching this question:

It looks like there are actually several different approaches which can be used when calculating the Critical loads, and depending on the approach the factors considered change:

The links contain further information which may be more helpful.

According to "Wolfe, A.P., Baron, J.S., Cornett, R., 2001. Anthropogenic nitrogen deposition induces rapid change in alpine lakes of the Colorado Front Range (USA). Journal of Paleolimnology 25, 1e7." as cited in the first article I linked, This excess N (caused by exceeding the critical load) can result in acidification and nutrient enrichment, increasing primary productivity in high-elevation lakes and streams, and altering diatom community structures that form the base of the food web –

The USFWS Ecoregion classification system was designed by Robert G. Bailey working out of the Rocky Mountain Research Station in Colorado. In his paper, "Identifying Ecoregion Boundaries" found Here: http://www.fs.fed.us/rm/ecoregions/docs/publications/identifying-ecoregion-boundaries.pdf he outlines the rational used for identifying the boundaries, and the 20 different principals he used. They are: 1. The series of ecoregions should express the changing nature of the climate over large areas. 2. Boundaries of ecoregions coincide with certain climatic parameters, 3. , 4. , 5 - 20

Not the answer you're looking for? Browse other questions tagged nitrogen acid-rain or ask your own question.

15
Break in human nitrogen input in 1990s
25
What is the origin of the dominant atmospheric nitrogen content in Earth's atmosphere?
3
Are there plants or bacteria that perform NO2 fixation and how relevant are they for improving local/regional air quality?
5
Nitrogen cycle semantics; nitrification/nitrogen fixation
1
Does nitrogen fixation plants consume nutrients from soil
0
How to interpret correctly this chart about nitrogen oxide?