Will the Southern Ocean act as a net source or sink for atmospheric $\ce{CO2}$ in the future?

Some estimates claim that currently about one third of current human annual emissions of $\ce{CO2}$ are absorbed by the oceans. Some authors have calculated that about half of the global ocean total absorption occurs in the Southern Ocean. They also claim that:

Considering the potential changes in ocean circulation and biological activity associated with climate change, can we expect the Southern Ocean to remain as such an important sink or are we moving toward a regime change that will lead to the ocean becoming a source of $\ce{CO2}$? 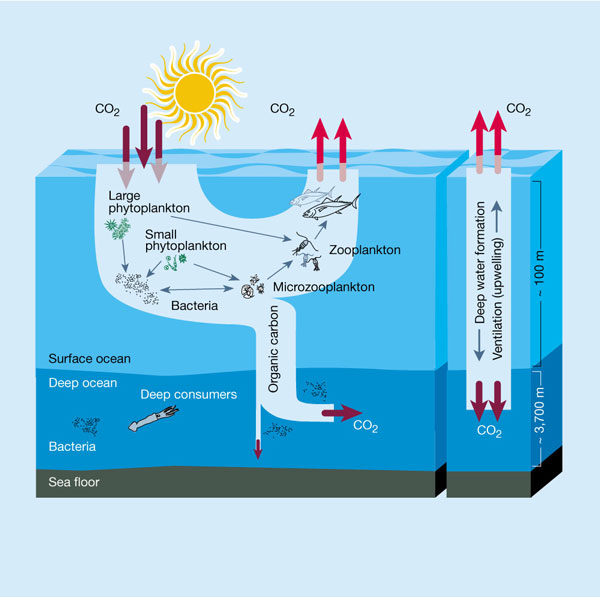 I think you may have misunderstood the abstract of the paper, which says:

Various human activities, including fossil fuel combustion and forest clearing, emit about eight petagrams (or billion tons) of carbon in the form of CO2 into the atmosphere annually. The global ocean absorbs about two petagrams of CO2, and about a half of that amount is absorbed by the Southern Ocean south of 30°S, thus slowing the rapid accumulation of CO2 in the atmosphere. Partial pressure of CO2 (pCO2) is a measure of the chemical driving force for the CO2 exchange between the ocean and the atmosphere. This paper discusses its space and time distribution over the Southern Ocean. The major sink zone for atmospheric CO2 is located in a latitude belt between 30°S and 50°S, where the biological utilization of CO2 and cooling of warm subtropical waters flowing southward produce low seawater pCO2.

Note that most of the "half of the global ocean total absorption" occurs in a band between 30°S and 50°S.

Strong winds in this zone also enhance the ocean's uptake. Although the source-sink conditions vary over a wide range through the seasons in the areas south of 50°S, this zone is a small sink on an annual average. Winter observations show that surface water pCO2 values in the source region for Antarctic Intermediate Water have increased at a rate faster than the atmospheric increase rate, suggesting that the ocean CO2 sink intensity has been weakening for several decades and has changed from a net sink to a net source since 2005. The results of ocean general circulation-biogeochemistry model studies are found to be consistent with the observations.*

The "net sink to a net source since 2005" appears to relate to this area south of 50°S, which was only a small sink to begin with. This suggests that the southern ocean as a whole is still a strong carbon sink. As the evidence for an increase in the airborne fraction increasing is currently equivocal, this suggests that the natural carbon sinks (including the southern ocean) is still strengthening in response to increasing atmospheric concentrations.

Note the conclusion of the paper talks of the 30°S and 50°S being a sink in the present tense, which would be inappropriate if it had become a net source since 2005.

Some new evidence has come out, with the investigated are extending from 35S to 90S. Some things were different than in the study from 2007. The Southern Ocean played an important role in carbon sink. Compared to this domain, fishing activities are much in the low latitude. 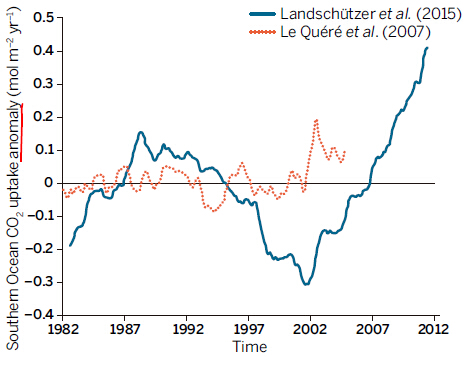 Not the answer you're looking for? Browse other questions tagged ocean oceanography antarctic co2 or ask your own question.

18
How long does it take for the ocean conveyor to circulate?
13
Is it possible to forecast ocean salinity 100 years into the future?
8
How will the rising ocean affect aquatic life?
11
Will the ocean eventually erode all land?
4
Is the net amount of CO2 sequestered by trees from the atmosphere simply related to the mass of new growth?
3
Is the ocean a carbon sink when considering only the biospheric component?
4
The effect of CO2 concentration on the pH of the ocean
4
As the number of ocean dead zones increases, is the world's primary source of atmospheric oxygen (phytoplankton) at risk?