Why does Earth have abundant oxygen in the atmosphere?

Because of photosynthesis, obviously. But then it's not actually that obvious after all, because photosynthesis is mostly balanced by respiration.

We can summarise the processes of photosynthesis and respiration like this: $$\begin{align} \ce{CO2 + H2O + h\nu} & \rightarrow \ce{O2 + CH2O(biomass)} \\ \ce{O2 + CH2O(biomass)} & \rightarrow \ce{CO2 + H2O} \end{align} $$ If these two reactions were always balanced then the concentration of $\ce{O2}$ would never have changed. If I understand correctly, there are abiotic processes that deplete $\ce{O2}$ to form iron oxides, and so in order for there to be persistent $\ce{O2}$ in the Earth's atmosphere, the biosphere as a whole must continually produce an excess of it. In order for this to happen, there must be some processes that consume biomass at a non-neglible rate without removing a corresponding amount of $\ce{O2}$ from the atmosphere.

My question is, what are the processes primarily responsible for this? Is it just due to the burial of unoxidised organic matter (to form coal, oil, etc.), or is there more to it than that?

This is only a partial answer as it doesn't explain why the excess of O2 stayed but one thing you have to appreciate is the fact that aerobic respiration appeared almost half a billion years after photosynthesis, so we can't really say that photosynthesis and respiration have always balanced each other.

There was therefore at least half a billion year during which cyanobacteria were producing O2 with no one able to breathe it.

My answer goes a little beyond the evidence -- there isn't much evidence.

There's a lot of free oxygen now. This oxygen did not suddenly come from underground or from space. So it used to be attached to something. The question is, what was it attached to, and what happened to what it was attached to?

First off, there's every reason to think that bacteria already did oxidative phosporylation before there was any free oxygen. It does not require free oxygen, it requires an electron acceptor. O2 provides the most energy, but many other reactants provide some energy, and the bacterial kingdom uses a bewildering variety of them. To use a different electron acceptor requires only one different enzyme -- the rest of the pathway can be the same.

So before there was free oxygen, prokaryotes did arbitrage -- they evolved to use the best electron donor/electron acceptor pair they could find under whatever conditions they faced at the moment. And everything they used for that had to be created in a cycle. Anything which they used up that was not replaced, would quickly be gone.

Before there was free oxygen, photosynthesis still got done. Some bacteria used H2S as an electron donor, creating S which could later be reduced for energy. Some created H2. Some could reduce CO2 so that they could use the carbon and oxygen to make structures they needed. Some could not, but could still get energy from light. One way to do that was almost the same as oxidative phosphorylation, it used the absorbed light energy for electron transport instead of using redox energy, in practically the same pathway.

What was it that was bound to oxygen in the old days, that was not bound later?

So by changing states it could affect free O2. And solid sulfur could wind up on the ocean bottom where it would be subducted.

Perhaps there was a time when the atmosphere had only 75% as much N2 as it does now, and no O2. This reaction would imply the oceans used to be more acidic than they are now. But there could be other reactions that would counteract that, and there were lots of other buffers.

Or bacteria could have metabolized silicic acid into insoluble compounds that had less oxygen. This is entirely hypothetical since only a little carborundum has been discovered, and the rest would have had to be subducted.

It was a complicated web of reactions. Photosynthesis provided the energy to create energy-rich chemicals. Meanwhile every organism that was not photosynthetic was busy finding its best mix of catalyzing chemical reactions that provided energy, versus creating the molecules needed to grow and reproduce. Strange things happened.

I will explore the answer admitting that the Earth's temperature in the ancient past was much higher than we now assume as possible. The current standard model is the 'Snowball Earth' which leaves many unsolved problems - see 'Faint Young Sun Paradox'.

All the water of the oceans would stay in the atmosphere layer provided the temperature was high enough. The percentage of oxygen would be $\approx 0$ because it would be masked by the massive presence of $\ce{H_2O}$.

Later, when the temperature dropped, the water has migrated to the ocean floor and the percentage of $\ce{O}$ exploded to current levels. This fact is called the 'Great Oxygenation Event' and it is not very well understood under the standard model.

"There are two known natural ways of producing oxygen: by UV dissociation of H2O and by photosynthesis. In the ECM, the former process was initially much more efficient than at present because of the huge amount of water vapour and of the greater intensity of UV radiation occurring then. The biological production of oxygen would have been important during the Archean, which ended at 2.5 Ga, therefore earlier than the GOE. The usual approach is to consider that the biologically produced oxygen was first combined with dissolved iron in oceans and only significantly released to the atmosphere later – a way to explain the delay between the presumed time of the biological production of oxygen and the rise of its atmospheric level. Here, there is no need to consider a delay – the biologically produced oxygen was dissolved in water and absorbed by the huge atmosphere without significantly changing its composition; the oxygen level increased only when the atmosphere significantly decreased due to the condensation of water vapour. One can now consider that oxygen was produced in large amounts since the beginning, first from UV dissociation, at a rate that decreased over time, and very soon followed by biological production. In this case, there was an important amount of free oxygen in the atmosphere long before its atmospheric level started to increase significantly; and some potential evidences of it can be identified (for a review see Yamaguchi, 2005)."

ECM stands for Evolving Climate Model where this new concept was brought to life in a formal document (if you wish to explore further you can follow the 2nd link in my profile, not peer-reviewed)

EDIT add:
Although no one wants to peer review the document of ECM,(*) its graph on fig.9 provides modeled data that is aligned with the most recent measurement of Oxigen.
Measures goes against all of the accepted models ( 5 times more Oxigen at 815Ma), as seen on fig 4 on this news 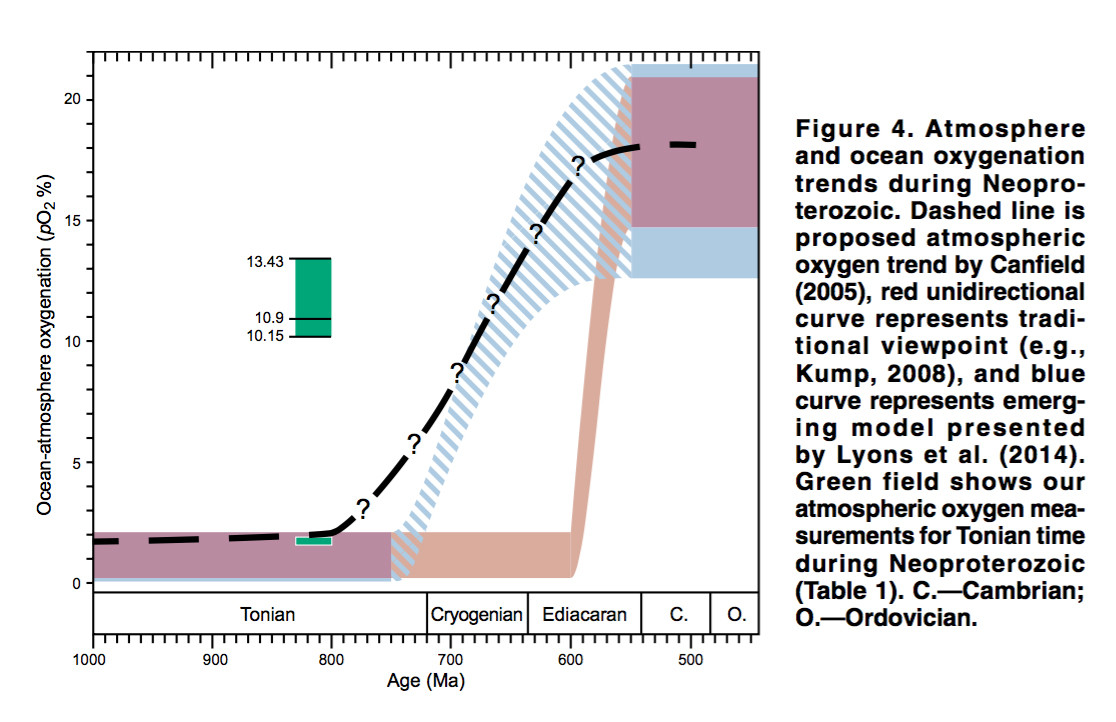 On the contrary the Fig. 9 of ECM 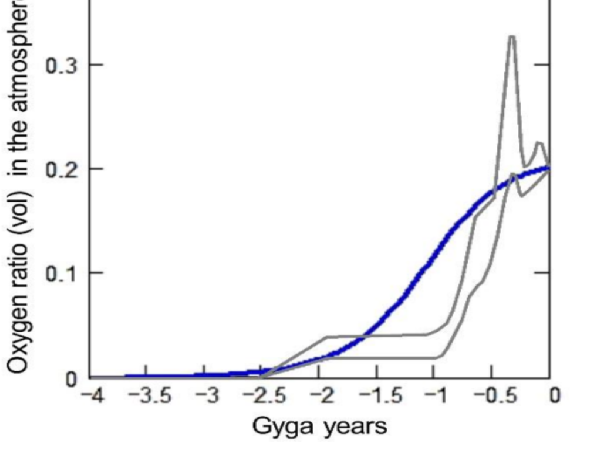 ECM is not peer-reviewed but it predicted the data to be seen (it is Data-reviewed) !

(*) ECM is a creation of an engineer, and scientists assume that science is not for engineers.

note: This new measurement enable to say: Oxygen first, Life second, rendering erroneous most of the answers one can find around.

Why so many down votes (5) if it is notorious that none could find an error in the document?

Not the answer you're looking for? Browse other questions tagged atmosphere geochemistry biogeochemistry geobiology great-oxidation-event or ask your own question.