Why do tropical cyclones around Australia have erratic paths?

According to the Australia Bureau of Meterology:

Research has shown that cyclones in the Australian region exhibit more erratic paths than cyclones in other parts of the world. A tropical cyclone can last for a few days or up to two or three weeks. Movement in any direction is possible including sharp turns and even loops. 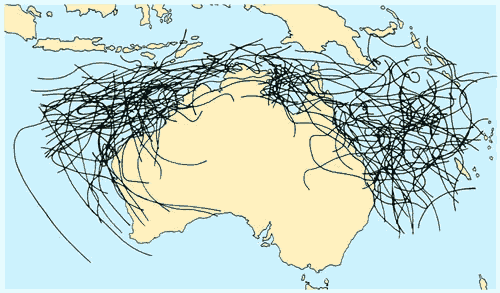 Why do they change directions so radically? Does this occur in other parts of the world or are North American hurricanes the anomaly in their typically smooth tracks?

The paths of cyclones in the Australian Basin are no more erratic than cyclones, hurricanes or typhoons elsewhere. Conditions at the time of a cyclone's existence determine its path.

Sinuosity of Cyclone Tracks - SW Indian Ocean states that over the past three decades the sinuosity of cyclone paths in the SW Indian Ocean has a high degree of variability. It appears that in that part of the world, cyclones can make more abrupt changes in their paths during January than in other months of the cyclone season. It also goes on the state there are marked periods when the paths of cyclones are less sinuous and other periods when they are more sinuous when compared with long term averages.

The following picture, from Wikipedia, shows the paths of the cyclone tracks for the 1988-89 south west Indian Ocean cyclone season. A number of the paths are erratic. 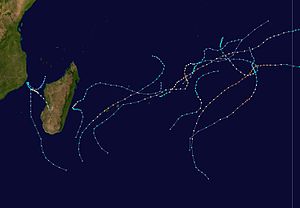 Paths of other cyclones can be seen on the following Wikipedia pages:

Paths of the World Hurricanes, Cyclones & Typhoons for the past 170 Years

NOAA Site displaying the paths of past cyclones, hurricanes & typhoons