About meddies: what are they? How do they form? How are they maintained?

A "meddy" is usually described as a Mediterranean Water eddy. While many meddies have been observed in recent years, I would want to know what are the common characteristics of such features (temperature, salinity, depth, lifespan)? What are the conditions that cause the formation of meddies? How are they preserved for so long as they may last for about 2 years and cover distances up to one thousand kilometers?

Meddies are anticyclonic (rotating clockwise) lenses of warm salty Mediterranean Water that travel through the North Atlantic between ∼500 and 1500 m depth. They are observed as large temperature, salinity and velocity anomalies (Richardson et al., 2000). Meddies are typically 40–100 km in diameter with their core being 500–1000 m thick.

Meddies separate from the Mediterranean Undercurrent (the main Mediterranean outflow) as it flows through abrupt topographic changes like major canyons. Each year between 15–20 meddies are formed off southern Portugal predominantly at two sites (Bower et al., 1997): Cape St. Vincent (37° N) and Extremadura Promontory (39° N). They can be detected by their surface signature in surface temperature and sea level anomalies (Oliveira et al., 2000). A large percentage of the meddies formed collide with large seamounts decay while some travel west on the north side of the seamounts and then travel southwest near Cape St Vincent toward the Canary basin with translation speeds of a few cm/s and clockwise rotation periods of 4 to 6 days (Richardson et al., 2000).

Meddies can have maximum salinities around 36.5 and maximum temperatures around 13°C and they are observed as large anomalies (salinity anomaly ~1 and temperature anomaly ~4 °C) as they travel westward into cooler and fresher water. During their trip, the Mediterranean water inside the meddy slowly mixes with the surrounding Atlantic water and the salt anomaly progressively weakens until the meddy dissipates. The main processes causing mixing occur at the boundary of a meddy where the largest gradients of temperature and salinity exist and are double-diffusion and thermohaline intrusions as large as 25 m thick (Meunier et al., 2015). 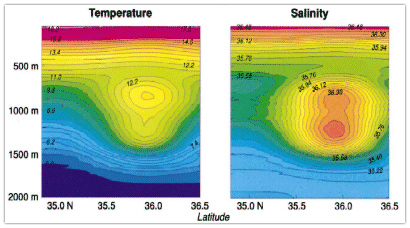 Meddies average lifespan is around 1.7 years although some were observed for more than 5 years (Richardson et al., 2000). During that time they travel distances up to one thousand kilometers and their maintained mostly because the core of the meddy tends to have a doubly-stable stratification (Armi et al., 1989). Up to 29 meddies may coexist in the North Atlantic at the same time (Richardson et al., 2000). 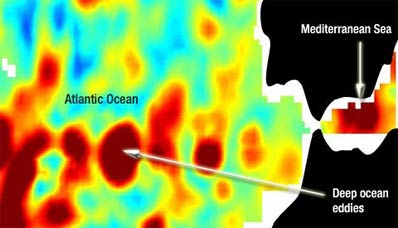 From Univ. of Delaware (http://www.spaceflightnow.com/news/n0603/21whirlpools/)

Not the answer you're looking for? Browse other questions tagged oceanography atlantic mediterranean eddies or ask your own question.

9
How do Rossby Waves in the ocean form?
33
How and why did the oceans form on Earth but not on other planets?
9
What are the striations or ridges in the eastern Pacific Ocean?
12
What are baroclinic and barotropic waves?
7
What wind forecast datasets are available for forcing a wave forecast model?
7
What are these river/canyon-like carvings in the ocean?
2
What are good oceanographic journals
6
How do long, thin, island chains such as North Carolina's outer banks, form?