Is there a correlation between hot springs and earthquakes?

Is there a correlation between how many hot springs an area has, and how frequent or severe the area's earthquakes are?

Yes, there is a correlation.

In other words: places with hot springs are more likely to experience earthquakes than places without hot springs. The relationship is scale-dependent in time and space (your house might not sit on a hot spring but still get earthquakes).

Ideally I'd dig around and find actual data to quantify this spatial correlation (and I hope someone does!), but for now I will settle for qualitative evidence at the continental scale. I offer a visual correlation between the two datasets in question. First, geothermal springs:

Like any correlation in geoscience, it's not perfect. But, broadly speaking, there is one.

Footnote: Actually, there are at least two correlations. As with fracking for shale gas, well stimulations and other industrial activity in geothermal fields has recently been blamed for induced seismicity in places like the Imperial Valley of southern California. Sometimes correlation does imply causation!

Hot springs usually exist in volcanic regions or in areas where there are extensive (normal) faults. The water circulates through the fault zones (basically damaged zones with high permeability) bringing heat from great depths. However these faults don't have to be active.

Therefore a correlation between location of hot springs and present day seismic activity is not necessary but the faults were indeed active at some point in history.

Edit: @winwaed: I wanted to add that there indeed are faults associated with Hot Springs in AR. I am including a figure of the region borrowed from a NPS publication here. Look carefully at the figure in the lower right where water is flowing upwards through a fault. A lot of people have the misconception that there are no faults in the interior of plates. That is not always true. In fact quite the opposite. 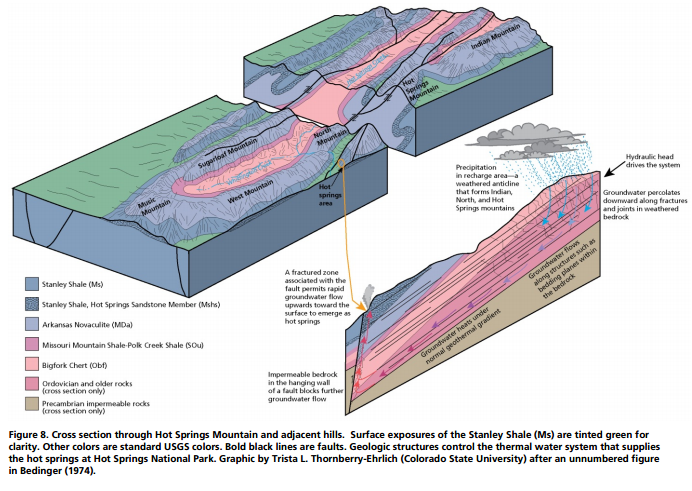 As a counter to @stali's answer, it is possible to have hot springs without volcanism or normal faulting - although these two scenarios do cover the most well known examples.

Hot Springs, Arkansas exists because of the local geological structures (folding rather than faulting) that bring ground water up to the surface from deep in the Earth relatively quickly.

Also radiogenic rocks (eg. granites) can increase the thermal gradient, making this scenario more likely. Eg. the UK's "hot springs". Okay they're not that hot, but shallow boreholes found 60C water at Buxton (and nicely radioactive); and hot water in a Lafarge mine/quarry in Weardale (?). The last I heard, there were plans to turn the latter into a spa...

Faults are everywhere, mostly sealed, active or not. The question is how do the hot fluid conduits stay open in some places and not others. I am currently studying thermal (hot and others) spring distributions in many regions of the world, as well as fault zones, and hot spring conduits in fault zones. The fluid-rock interaction, and discrete flow channel maintenance is likely as important, if not more, than activity of faults.

We do not yet understand how the permeability structure or distribution in a fault zone evolves over time once the rock is fractured, and as the fault zone is exhumed to what is not outcrop or the upper 1km depth in the crust. The damage zone did not form there. In strike slip faults, it may have formed 100km away. The damage, and permeability evolution is cumulative and not yet understood. We only get glimpses. Of the mapped Quaternary faults in USA and Japan, the number of test sites for permeability is about 0.1%, even if we generously give the "tested segment" 1km length. Basically, we sampled only a very small number of faults and poorly.

Hot springs, and thermal springs in general, are very promising in giving more estimates of permeability in the upper crust, but more work is needed on this.

I have drilled several paleo-hot spring conduits that are still open, and hydrothermally altered fault zones that are 1km wide, and the flow channels appear to be dissolution macro-pore tubular type of channels within fairly wide mineral fills in former fractures, in faults that are mostly sealed. Many hot spring orifices are not exactly or even near the faults that provide the main upflow of thermal plume, as flow can be along permeable strata, non-fault fracture zones (fractured dykes or along them - see Iceland), volcanic extensional fissures (not faults), smaller fault zones that intersect (many papers point to fault zone intersections as permeability maxima), and many other features. The number of "hot springs" (at faults?) at the top of basement rock under sedimentary basins is likely large and unknown.

We need to test more hot spring conduits, and faults, systematically, and combine this with detailed geophysical surveys, and get more unpublished data from the geothermal industry released to scientists.

Not the answer you're looking for? Browse other questions tagged seismology earthquakes geothermal-heat or ask your own question.