Why can Thomsen's parameter $\epsilon$ be negative in VTI media?

I just got several well log curves, some of which are Thomsen's parameters. They are a result of interpretation of Sonic Scanner tool measurements (Schlumberger). Negative epsilon values appear quite frequently, which is not physical for VTI media (as far as I can conclude from books). Am I right?

The question is not about measurements with a specific tool, but rather about the physical and geological interpretation of negative epsilon values. Gamma is also negative, by the way.

Negative values are physical and are expected. 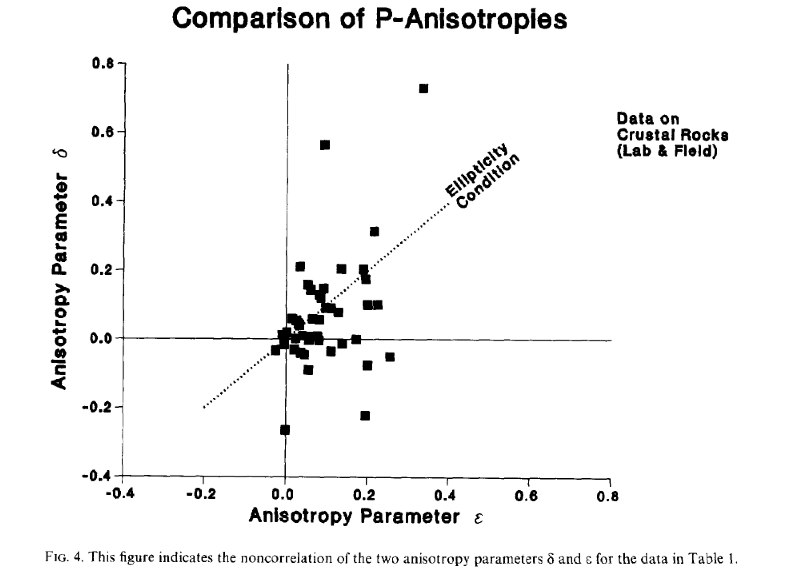 Usually these parameters are, at a gross scale anyway, positive, because usually velocity is faster along bedding (roughly horizontally) than across it (roughly vertically). But it's easy to imagine scenarios where the relationship is reversed, especially if we're talking about small scales — as in log measurements.

Intuitively, we can draw these conclusions about negative parameters:

VTI anisotropy can also result from stress induced anisotropy when the two horizontal stresses are equal and the overburden is the largest stress acting on a stress sensitive formation such as a weakly consolidated sandstone. In such situations grain contacts are aligned in the vertical direction resulting in a stiffer (faster compressional velocity) response. See e.g. Detection of stress-induced velocity anisotropy in unconsolidated sands, Vega. The Leading Edge 2006. Note that the anisotropy values provided in Thomsen 1986 are not necessarily reliable and predate modern laboratory measurements. More recent measurements of anisotropy are available from a number of studies such as Wang, 2002 (Part II Geophysics). A more recent compilation of published mudrock anisotropy parameters is available which shows that very few of the mudrock Thomsen epsilon anisotropy values are negative, see http://www.rockphysicists.org/data 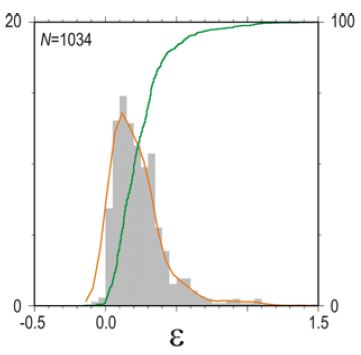 The other issue is that you do not measure Thomsen's epsilon with a sonic log in a single well. The Thomsen epsilons in your log suite will have been estimated from some other supplementary information, most likely an empirical relation based on observed core measurements. There is a model developed by Schlumberger referred to as the Modified Annie model that may have been used.

14
Why is a seismogram interpreted as a convolution?
12
Why is colored seismic inversion called 'colored'?
13
How accurately can explosions be triangulated from the IRIS seismogram data?
18
Why Vp/Vs and not Vs/Vp?
7
Why does part of the P-wave convert into a S-wave with an increase of incidence angle?
6
Why is it necessary in seismic imaging to calculate an image of reflection coefficients when one of the inputs is the velocity model?
6
What is (negative) wind stress curl?
6
How can I calculate the sensitivity of a seismometer?
2
Difference between model parameter and observable parameter
6
Where can I find an anisotropic PREM-like model for Earth's interior?