Why does part of the P-wave convert into a S-wave with an increase of incidence angle?

With the increase of incidence angle, a portion of a P-wave converts into a S-wave, how does this behaviour occur?

The way I imagine this phenomenon is illustrated in the picture below. I have to warn you that it lacks scientific accuracy and is just a simple way to imagine the effects we observe on a reflective boundary. However, it can be useful as a simple model you can easily imagine.
In the upper picture you can see an illustration of a reflection event at a horizontal boundary.
The lower picture illustrates how the vector of particle motion in a down-going P-wave is 'decomposed' into two vectors. First component is a vector of particle motion in an up-going S-wave, the second corresponds to particle motion in an up-going P-wave.

Once again, this is not how the rays exactly behave in a reflection event. Here we do not take into account transmitted waves and lots of other factors. Nevertheless, sometimes you can use this 'approximation' because it satisfies two conditions:

These effects are also observed in real life.
Exact description of a reflection event on a plane boundary, as kwinkunks has mentioned above, is given by Zoeppritz equations. They take into account all details and are widely-used. No doubt, they are much more difficult (but physically correct!) than a simple sketch I suggest. 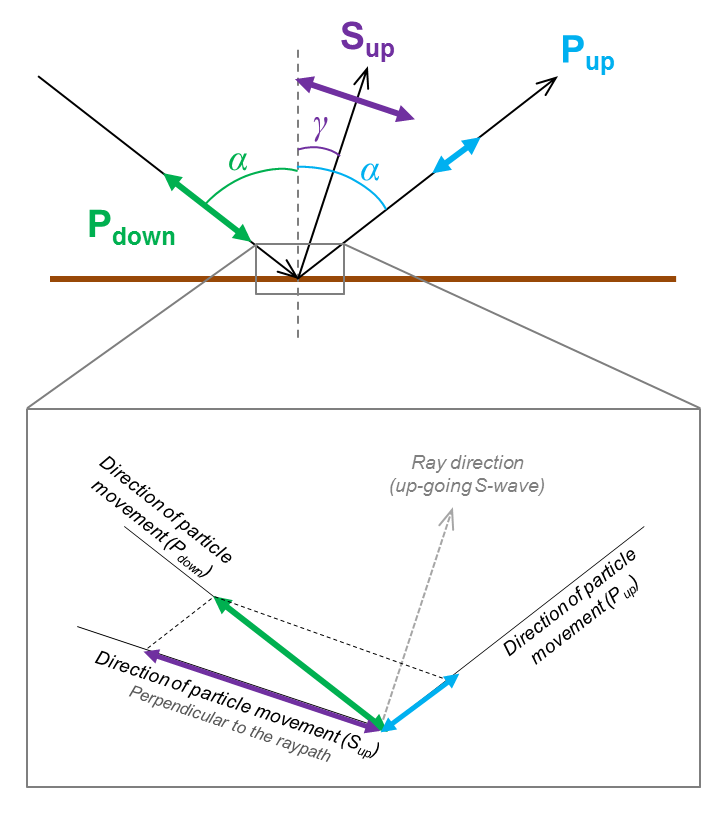 8
Checking the bedrock with radiowaves - how does it work?
14
How are subsurface wave speeds determined without subsurface sensors?
12
Temporal Resolution of Seismic data
18
Why Vp/Vs and not Vs/Vp?
3
Which component in a 3-component Sp receiver function is the actual Sp RF?
1
Love-Wave Propagation
6
Why doesn't the Earth's outer core dissolve into the mantle?
2
Travel Times for Seismic Wave Types - Why reflected t-x plot curves