According to How Long Will Life Last On Earth, 250 million years ago Siberia underwent a large a prolonged period of volcanic activity. It has been speculated that large salt deposits that existed in Siberia, and still do, were baked by the volcanic activity and large amounts of ozone destroying chemicals were released into the atmosphere.

A study presented in the Science Daily article (based on a Science article), Study: Sea Salt Seasons Chemical Brew That Destroys Arctic Ozone (Purdue University, 2001) could serve as an analogue to salt induced ozone depletion.

Sea salt, in particular, compounds formed from the constituent chlorine, bromine (and fluorine) found in most salts have been identified as ozone depletors - researchers have found that the sea salt in the Arctic containing these ions cause a seasonal thinning in the Arctic. With a large concentration of salt in the strata, as found in the region of the Siberian Traps, it is not inconceivable to assume that large quantities of chlorine and bromine were released in the atmosphere.

Quantitatively, according to the article Magnitude and consequences of volatile release from the Siberian Traps (Black et al. 2012), the actual amount released was in the order of approximately ~3400–8700 Gt chlorine, of which a good proportion was, according to the article, assimilated into the magma from melting of the evaporite, salt and sedimentary rocks. Also postulated by Environmental mutagenesis during the end-Permian ecological crisis (Visscher et al. 2004) was that the size of the Siberian volcanics caused the assimilation of volumnous organics and halogen based deposits (including salts).

These hypotheses are supported by experiments reported in the article Contact metamorphism, halocarbons, and environmental crises of the past (Svenson et al. 2009), where rock salt from Siberia was heated to 275C released ozone depleting halocarbons such as methyl chloride (CH3Cl) and methyl bromide (CH3Br).

In general, considering the most common salt is sodium chloride (NaCl), once dissolved, the chloride ion (Cl-) is very reactive, and forms several ozone depleting compounds (such as the halocarbon examples above), and chlorine itself can react to 'tear apart' ozone itself, as shown in the diagram below: 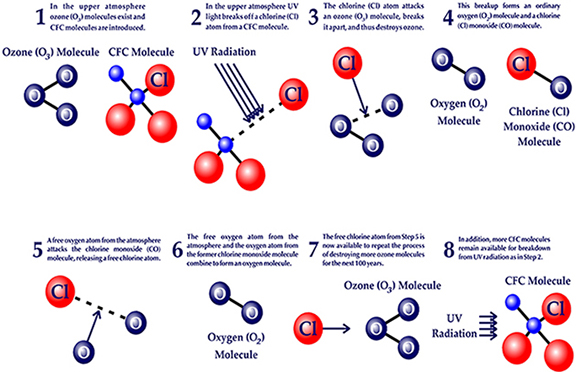 The example used in the image above are manmade CFC's (chlorofluorocarbons), however, it can be applied to any halocarbon or for chlorine itself from step 3 onwards.

In conclusion, any halogen (particularly F, Cl, Br) based salt are potential ozone depletors, due to the reactivity of the halogen ions. Especially Cl due to how common NaCl salt is, the Cl (and other halogens) can react with other chemicals that may be present also providing ozone depleting chemicals. So, given the amount of salt that the Siberian Traps that would have heated up, the chances of a fairly large effect on the ozone layer at the time are pretty good.

21
What is the origin of the ocean's salt?
4
What natural phenomena increase stratospheric ozone?
2
What is the impact of climate change on tropospheric ozone production and vice versa?
9
What conditions could produce 50 km long lava tubes?
3
Can planes damage the ozone layer?
13
Why have "ozone-depleting substances" led to a third of all global warming and half of arctic sea ice loss?
2
Can Ozone (O$_3$) form in a vacuum and if so can it deflect solar radiation
4
Can humanity help reinforce the ozone layer?