Why does Australia have extensive uranium ore deposits?

According to the World Nuclear Energy page about Australia's uranium deposits, the continent's

known uranium resources are the world's largest – 31% of the world total.

In 2013 Australia produced 7488 tonnes of U3O8. It is the world's third-ranking producer, behind Kazakhstan and Canada.

The deposits are found across the Australian continent, within different geological regions of different ages (e.g. most of the deposits in the eastern part of the continent are considerably younger than those in the west). The main known deposits are shown in the map below, by Geoscience Australia: 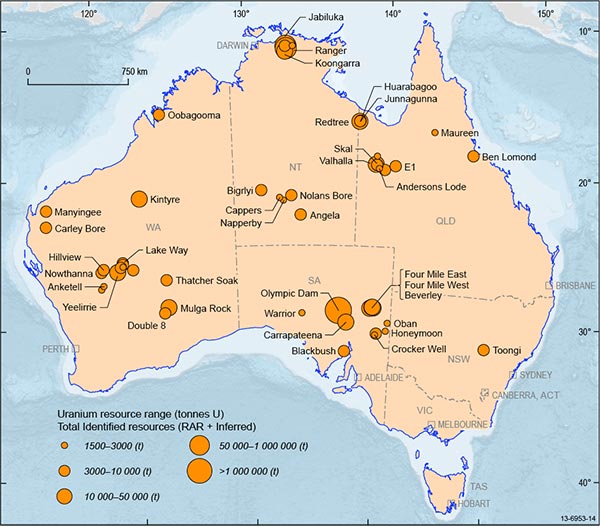 Why does Australia have extensive uranium ore deposits?

An aptly named webpage from GeoScience Australia: Why Australia has so much uranium provides some insight as to some of the reasons behind the Australian continental relative enrichment in uranium.

Consider the following map from the GeoScience webpage:

observations support the conclusion that the large number of uranium deposits and prospects across Australia reflects the extensive emplacement of uranium-enriched felsic rocks in three main periods of igneous activity. While some uranium deposits appear to have formed during these widespread thermal events, most formed from uranium-enriched source rocks by subsequent low-temperature processes.

The last point in bold above is elaborated further by the website, that uranium mineralisation being younger than the related intrusive igneous rocks. Particularly evidenced by deposits found in calcrete, sandstone and unconformities:

appear to have formed as a result of uranium mobilisation from older uranium-enriched source rocks under low-temperature oxidising conditions, and precipitation by redox reactions. The high-grade deposits are likely to reflect relatively more efficient oxidation-reduction systems.

16
Why is there Uranium in Earth's Crust?
12
Ore deposits buried under cities?
12
Why do most opal deposits occur in Australia?
9
Did an impact crater influence the formation of uranium deposits in South Australia?
21
Why does phosphate rock contain uranium?
14
How do geologists find ore deposits?
4
Why is uranium only in the crust, really?
6
Uranium Deposits in the Ocean?
5
Why is lithium so unevenly distributed?
0
Is there any correlation between Australia's uranium deposits and the unique animals?