Was Earth's sea-floor always carved with the numerous geological features that we see today, or was it at some point flat and boring as Mars is today?

Yes, in terms of appearances (as in your question), the Earth's ocean basins have more than likely have been carved with features of some kind or another throughout Earth's history; however, the Martian surface is not featureless - not even close.

The reason being that the geological evidence suggests that plate tectonics has been going on for much of the Earth's history, a mechanism that seems not to be present on Mars - many observations and subsequent models show that the plates have been in motion for much of the history of the planet - resulting in trenches and underwater (and above water) volcanoes (subduction ones), ridges (sea floor spreading). Additionally, hot spot activity has given rise to numerous sea mounts, such as the Emperor-Hawaii seamount chain. These features often taken millions of years to fully develop.

Even though oceanic crust is recycled through plate tectonics, it could be assumed that these processes have formed similar ocean-floor-scapes on occasions over a long period of the Earth's history.

One of the main differences is that the processes that form these features on Earth have been, overall, semi-continuous on Earth - whereas on Mars, these processes, if started, died out a considerable time ago.

Was the Earth seafloor always carved with the numerous geological features that we see today?

Oceanic crust forms at mid-ocean ridges and disappears in subduction zones. This is what makes the oceans so dynamic in geological terms. There are no corresponding processes for continental crust. Continental crust is in general quite old compared to oceanic crust.

Depicted below is a map from NOAA that portrays the age of the oceanic crust. Note how the mid-oceanic ridge plays a dominant role. 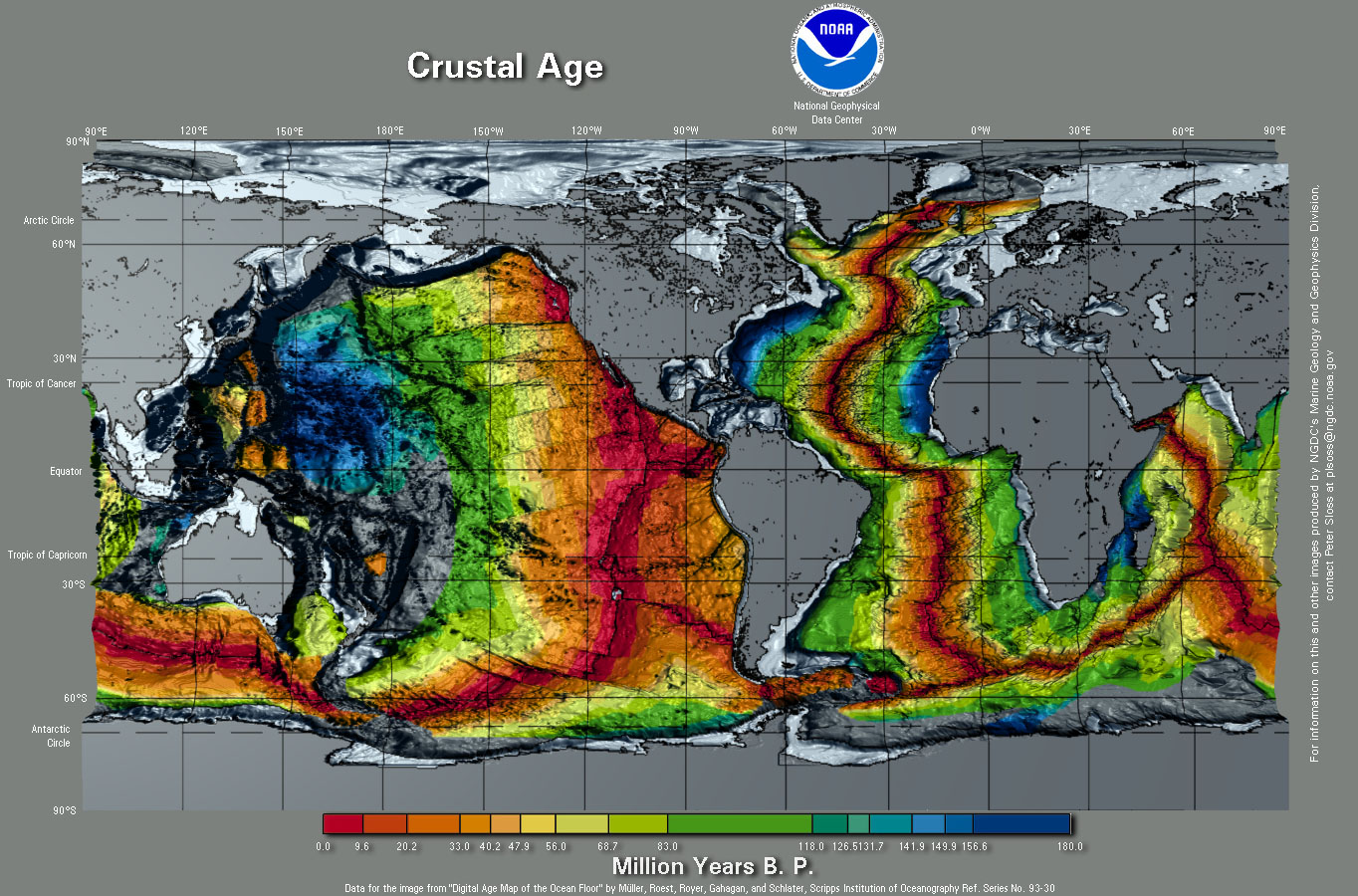 Update
The sea floor has not always been carved with the numerous geological features that we see today. In the article "Intermittent plate tectonics?" Science 319.5859 (2008), Paul Silver and Mark Behn show that plate tectonics has come to a temporary standstill at times in the Earth's past. The deep ocean trenches that separate two continental plates on a collision course with one another disappear when those plates do collide. When this happened globally (e.g., the formation of a single supercontinent), the dominant slab-pull mechanism faltered, and that in turn shut down the mechanisms that form the mid-oceanic ridges. The mid-oceanic ridges slowly collapsed under their own weight. The end result was an ocean floor devoid of features.

This apparently happened with the formation of Pangea. The collapse of the mid-oceanic ridges resulted in a vastly reduced sea level. Sea level at the end of the Permian / start of the Triassic was 300 to 400 meters below the present day sea level.

The features of the ocean floor include

Not the answer you're looking for? Browse other questions tagged geology oceanography planetary-science sea-floor or ask your own question.

19
How did Earth's plate tectonics start?
21
What caused the bend in the Emperor/Hawaii chain of islands, 45 million years ago?

20
What is the origin of the Montmartre mountain in Paris?
2
Would a Biorock formed buiding be suitable for ocean floor research?
7
Could the Grand Canyon be flooded by the ocean if it got deep enough?
10
What are these underwater structures near 6°N 85°55'W
2
What's really happening with "stormquakes"?
4
History of the Arctic Ocean
12
Is Hudson Bay part of the Arctic or the Atlantic Ocean?
5
Why does the ocean floor look so scratchy?
12
How plausible is it that "a portion of the ocean's floor" could suddenly be "thrown up to the surface" as described in this Lovecraft story?