What is the error in bathymetric observations in the presence of vegetation?

As noted in the comments, this is actually a much more complex question than it might seem at first. Answering fully would require a very involved and technical discussion of single-beam surveying's inherent errors and their causes (water velocity, side slope reflection, highly transmissive hydrocarbon-rich anthropocene silt, and other such complications). I will skip those topics—thankfully, I think—and simply focus on the OP's question of what errors Posidonia sea grass might introduce to a hypothetical singlebeam survey. As such this may be more of a partial answer.

Let's say you're using a singlebeam instrument with a fairly narrow pulse angle, like 3º. (Your vessel should not roll too much with this narrow a beam, but it will give higher resolution). You're surveying over a colony of Posidonia on a flat seabed. Posidonia leaves have a density fairly similar to that of the water column. Depending on the frequency of sound you are surveying with, you may get a ping with a slightly different shape from surveying over an area of "bare ground". This is, at least in theory, due to the slight variation in density between the water column and Posidonia leaf blades causing small amounts of reflection and refraction to the sound wave before it hits the root mat and the top of sediment. Just for imagination's sake, I've included the conceptual "bare ground" model below.

Behavior of P-waves and S-waves at a impedance change boundary. Image reproduced from Dragoset, B., A historical reflection on reflections, The Leading Edge, 2005, v. 24, p. S46-S71, Box 1.

A good singlebeam acquisition program will allow you to choose the method of bottom tracking. Often these methods are not associated with the first return but rather the "strongest" part of the first return within some specified distance from the last known bottom position. This allows the minimization of error created by, for example, fish swimming in the path of the beam (see image below), and also the weaker first returns of soft vegetation. 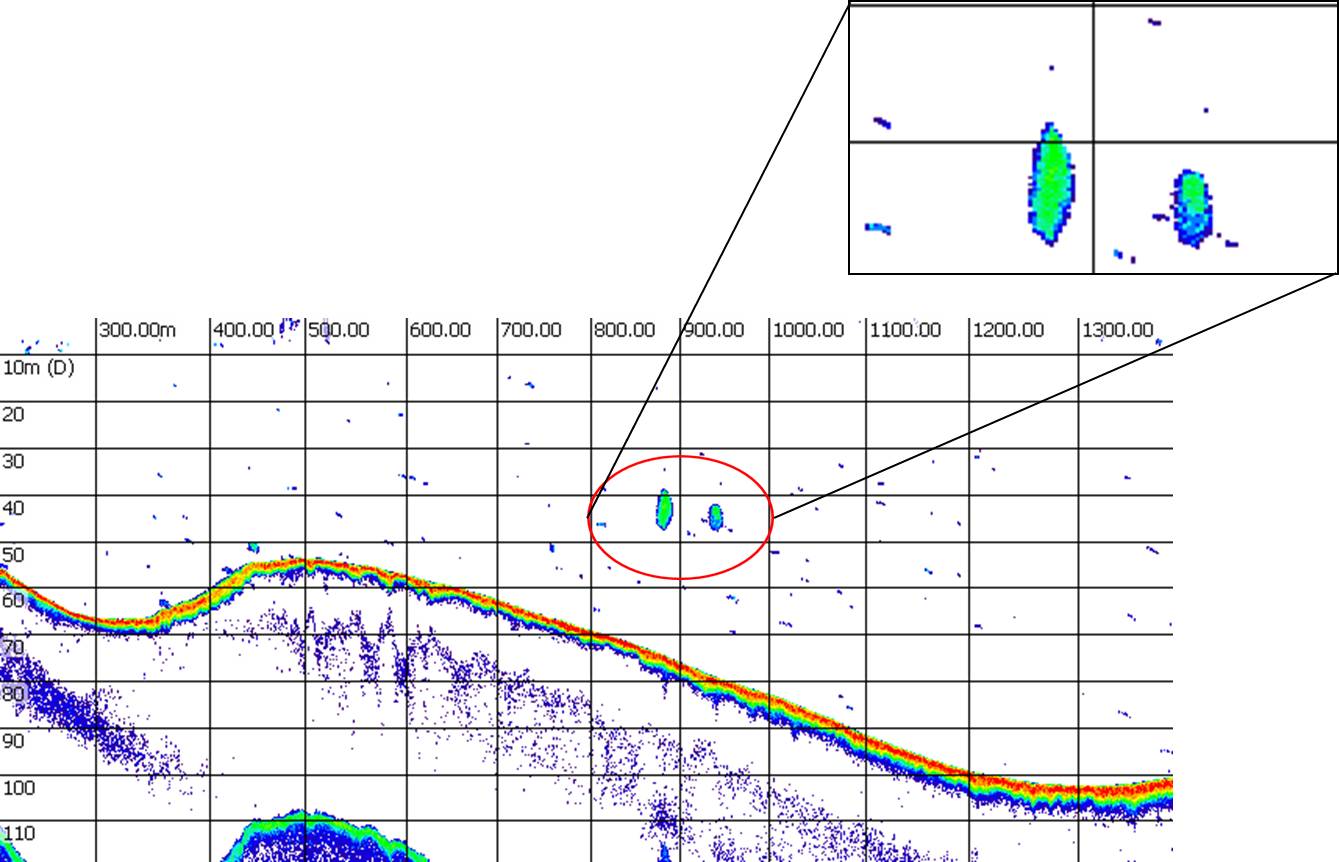 Fish in the water column as seen on a singlebeam survey. A red band indicates the strongest return amplitude. An acquisition program would likely classify the bottom at or near the top of the red band. Image reproduced from the University of New Hampshire Ongoing Education website.

So, if we assume that the acquisition program's bottom tracking capability is acceptable, the errors that Posidonia's leaves introduce will be minuscule, because the leaves do not present a large change in impedance and thus will not reflect much of the beam. You're left with deciding whether or not you want to classify the "bottom" of the water column as Posidonia's root mat, which may be several inches thick in a large colony, or the top of the sediment below. This is where your uncertainty will likely lie. What I don't know, and what may be difficult to figure out without some rather clinical testing, is whether or not the root mat provides a strong-enough first return to trigger the bottom tracking. I suspect it would, but I can't say that with any confidence without looking at a controlled test survey. I imagine companies like Odom and Kongsberg do this regularly and might be able to give you a more specific answer.

Tobbe also correctly notes that lower frequencies won't be affected as much by vegetation as higher frequencies. If you were going to try to run a bathymetric survey over Posidonia—or any area with high concentrations of seafloor plant life—you would want to consider using a device capable of lower frequency surveys...at the cost of diminishing your resolution.

Not the answer you're looking for? Browse other questions tagged instrumentation bathymetry vegetation or ask your own question.

14
What are the scientific consequences of the loss of the Nereus submersible?
10
How do I find the volume of ocean between any two layers of ocean depth?
10
Natural spiral pattern of grass - what could cause this?
3
What is this upside-down transparent funnel-shaped item on a weather monitoring station?
1
Why autumn follows the rainy season