Why is relative sea-level falling in Hudson Bay?

Why is the sea level in Hudson Bay decreasing so much? Hudson Bay is pretty far up north, much closer to glaciers. Would it make sense for it to recede at this level with sources of fresh water relatively close?

Much of Canada was covered in an extensive ice sheet in the last glacial period (the 'Ice Age'), from about 110 ka until 12 ka. The ice in the Hudson Bay area was among the last to melt: 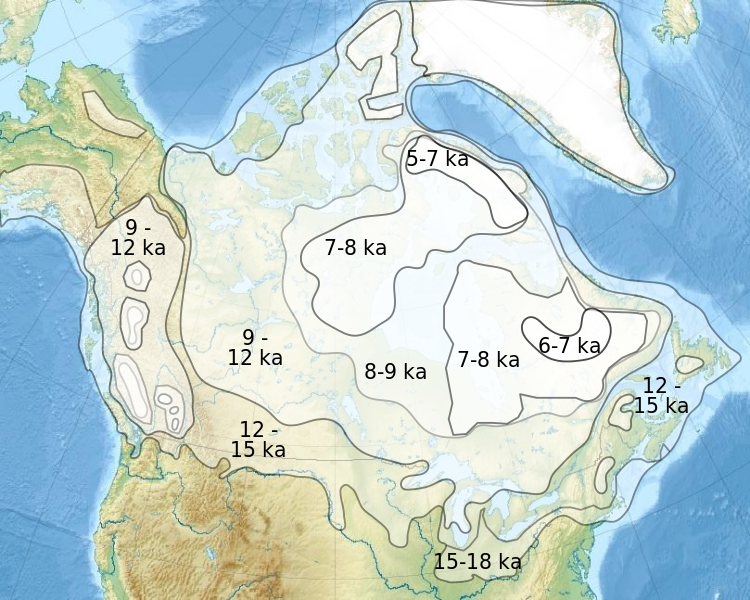 A thick ice sheet depresses the crust (the lithosphere), making a small dent in the uppermost mantle (the asthenosphere) in the process. Well, not that small: p 375 in Gornitz (2009, Encyclopedia of Paleoclimatology and Ancient Environments) says it could be 800 m for a 3000 metre-thick ice sheet!

Since the asthenosphere is highly viscous, it takes a long time time for the depression to 'bounce' back up. This map from Natural Resources Canada shows the current rate: 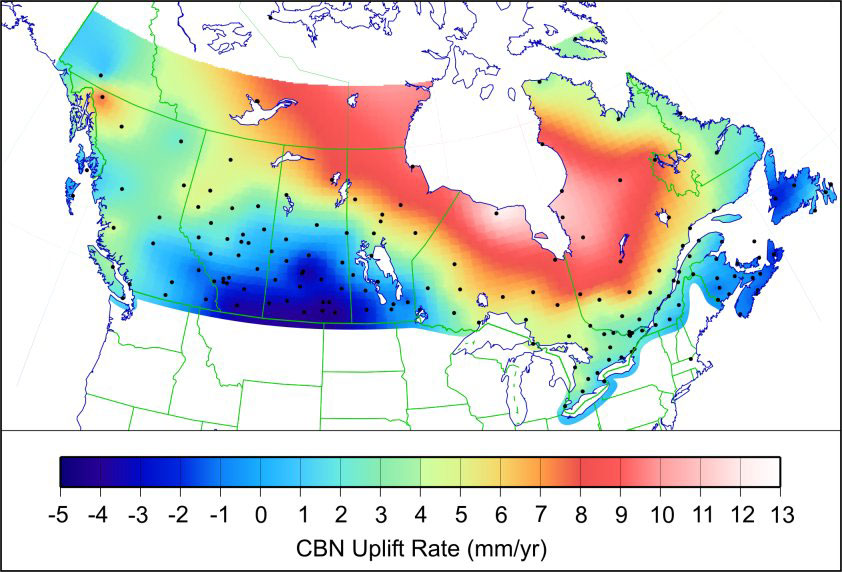 Since global sea-level is currently rising at about 3 mm/a, a local uplift at this rate will break even. Anything more will result in relative sea-level fall, as we see in Hudson Bay (as well as in Scandinavia, the UK, Alaska, and elsewhere — this map is wonderful).

Interesting, for geologists anyway, is the sedimentological record this leaves. I love this example of raised beaches and a small delta experiencing forced regression on the shores of Hudson Bay: 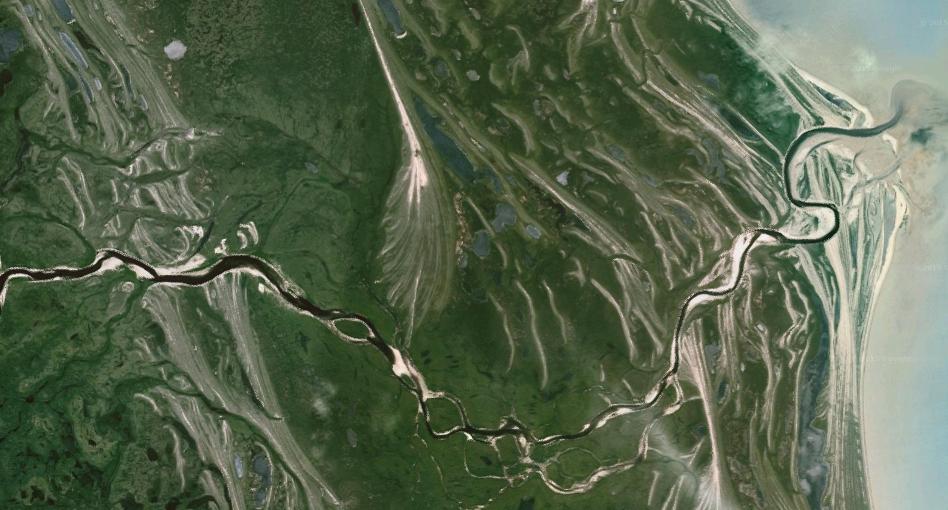 Would it make sense for it to recede at the level that it is receding with sources of freshwater relatively close?

Since Hudson Bay is connected to the world's ocean, mainly through Hudson Strait, the runoff into the Bay has no measurable effect on the water level.

Because of post glacial rebound. The asthenosphere was pressed down under Laurentide ice sheet during last ice age and is now finding a new balance, without the weight of the ice.

Note that around the ice sheet, the land is actually sinking today, like when ones partner gets up from a waterbed mattress. 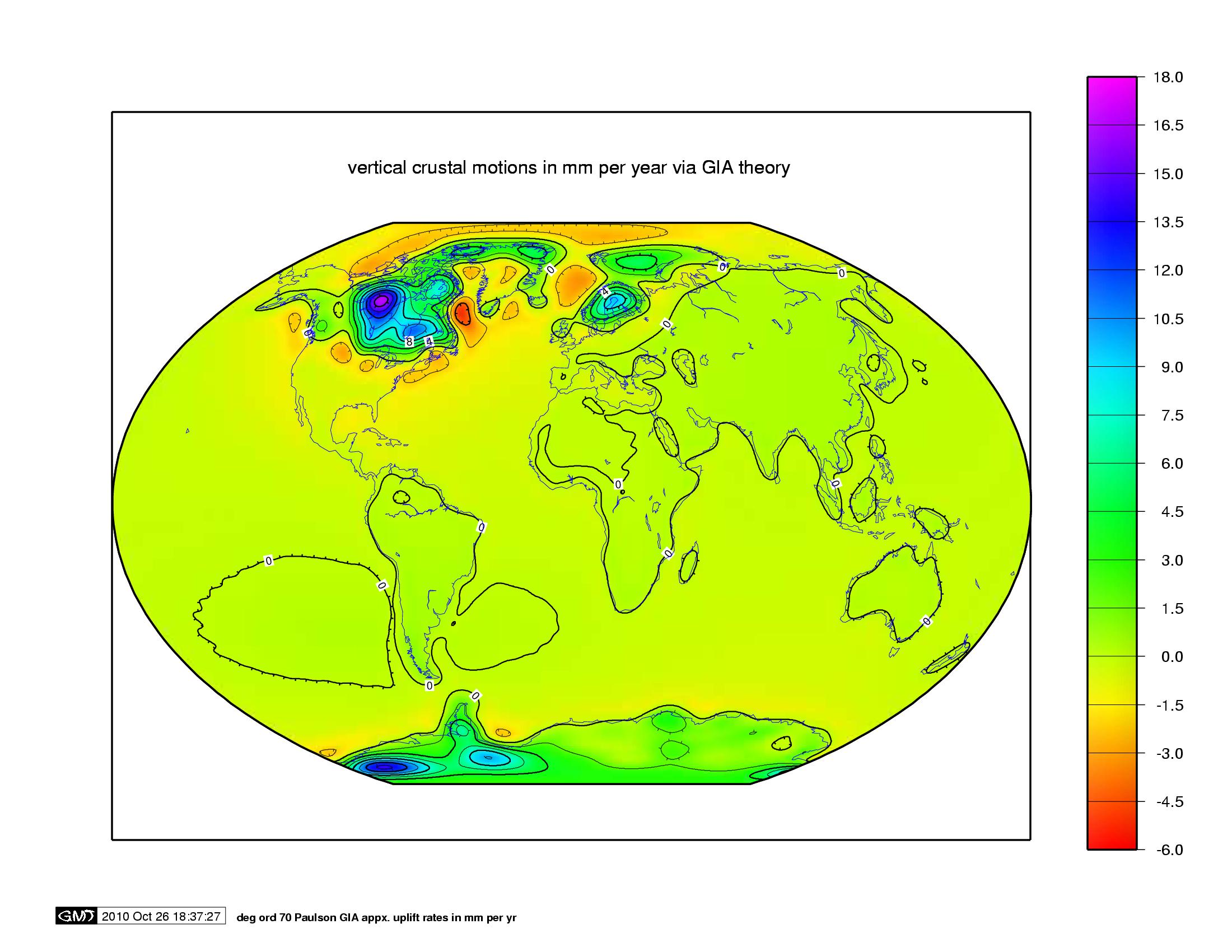 It is on the west side of Hudson Bay.

These jagged edge ups and downs, and severe drop in a short time, indicate this is not the result of rising land mass.

Greenland ice mass loss is the source of SLF in a wide area.

Gravitational dynamics of the Greenland Ice sheet have an impact, sea level fall, not often mentioned (e.g. on Europe: Proof of Concept - 5).

It causes sea level fall and sea level rise, depending on distance from the ice sheet (The Gravity of Sea Level Change).

Not the answer you're looking for? Browse other questions tagged geology oceanography sea-level ice-sheets glaciation or ask your own question.

22
How can the world's sea level rise and fall simultaneously?
7
Are the oceans rising or the continents going down? How can we know?
7
Have there ever been any islands that disappeared due to rising sea level?
4
Seismicity associated with post glacial rebound

19
What fraction of dry land is below sea level?
22
How can the world's sea level rise and fall simultaneously?
6
How far upstream would severe sea level rise (1m) noticably affect a large river?
9
Sea Level Rise due to Climate Change
12
Is Hudson Bay part of the Arctic or the Atlantic Ocean?
4
How far would average sea level rise from a 25% increase in total ocean volume?
5
Why is the tidal range at the entrance to the bay of fundy so high?
2
If we send ocean waters into glacier of north pole/south pole to reduce sea level, will it help global warming?
2
Would freezing the ocean and storing the ice in the poles reduce effects of climate change or sea level?