The question is basically:

During the Cretaceous there were no continental ice sheets. The ratio of O-18/O-16 in sea water was:

The answer is stated to be b, but it does not make sense as glaciers have a lower 18O/16O ratio and so the ratio should be higher than today. Can someone justify why it's b?

It does make sense. As you said - glaciers have lower 18O/16O. This is because they have less 18O overall. Therefore, the oceans have more 18O. But this is today.

At the Cretaceous there were no continental ice sheets, so what we said previously is not relevant. There are no ice sheets to take all of the 16O, so it's all in the ocean. This results in a lower overall 18O/16O ratio.

There is a quite relevant paper in Science with a fine analysis and interpretation on $\delta$ 18O evolution during the Phanerozoic Eon, which quite summarily display how this ratio depend on the sea level among other things.

Actually, following this paper, sea level was somewhat higher than today during the late Cretaceous, with a 100 $\pm$ 50 m peak during that period (in the abstract). They established the concept of a small and ephemeral ice sheet in Antarctica as well between 100 and 33 Million years. Some significant factors regulating the sea level and oxygen ratios would be, for any given time:

Briefly to answer the question, Figure 3 in the paper show the $\delta$ 18O in all time during the Cretaceous as lower than during recent times - so b) is the answer. 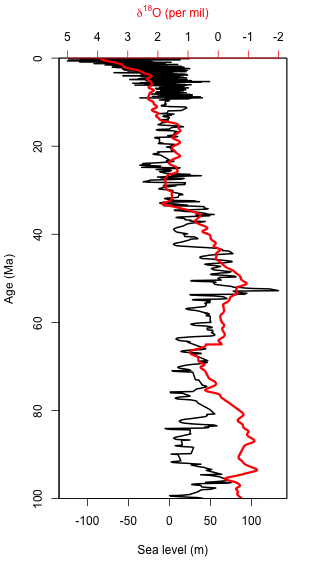 First of all, oxygen isotopes are generally given as 16O/18O so it is confusing the way the questions is asked from a geochemical perspective. My students typically get confused about this. But it is very simple to understand if you keep in mind that 16O is lighter than 18O. Evaporation of ocean water preferentially takes 16O relative to 18O thus decreasing the 16O/18O in ocean water (keep in mind we are talking about a ratio here). During glacial periods, more water is taken out of the oceans and collected in glaciers which have a high 16O/18O ratio. Thus the ocean water during high glacial periods will be low in 16O/18O. Therefore during a period of no glaciation the 16O/18O would be higher than today. Or, in the silly way the questions states 18O/16O would be lower than today

Not the answer you're looking for? Browse other questions tagged oceanography geochemistry homework glaciology or ask your own question.

11
Looking at ocean depth/latitude profiles of dissolved oxygen and nitrate. Why is dissolved oxygen low when nitrate is high?
9
How do we use oxygen isotopes as temperature proxy?
10
Siberia (Beringia) during last glacier period
5
Relationship Between Ratio of Atmospheric Gases and Ocean Gases
2
What behaviour does an ice sheet exhibit in crossing a cliff?
7
Was the Caribbean Sea a closed sea during the last glaciation?