Will a nuclear bomb stop an earthquake from happening?

I was recently watching the San Andreas trailer and a thought occurred to me as to how best to prevent earthquakes. I figured, why not nuke it? My professor said that it's possible for nukes to stop hurricanes so it got me thinking as to what else nukes could stop (besides humanity). The friction that develops is because of two plates moving against each other, right? So if you used enough nuclear bombs to completely obliterate a plate, the other plate wouldn't have anything to rub against, correct?

A nuclear explosion in the subsurface will result in ground motion which in theory can trigger an earthquake (due to passage of dynamic waves) if a locked fault has already accumulated sufficient strain over the last few decades/centuries due to slow motion of plates.

Having said that all the nuclear stockpile in the world is not enough to obliterate even a small part of the plate boundary. The 1960 Chilean earthquake released accumulated strain energy of the order of 3 Gigatons of TNT or 200 Gigatons of TNT equiv or 12 million Hiroshima type bombs (Numbers are based on calculations by JC Lahr and are available at http://www.jclahr.com/alaska/aeic/magnitude/energy_calc.html)

So yes, an explosion in the subsurface can probably act as a trigger for an impending earthquake but it cannot stop if from reoccurring again after few decades/centuries.

No, you can't stop an earthquake with a nuclear weapon. You can't even start one.

You asked if you could "obliterate a plate" with a nuclear explosion. Definitely not. Plates are between about 10 and 100 km thick, and as you can see from this map, the earth's 15 large plates are very large indeed:

As you can see at the pockmarked Nevada Test Site, nuclear weapons really don't make much of a dent by comparison — these craters are about 200 m across: 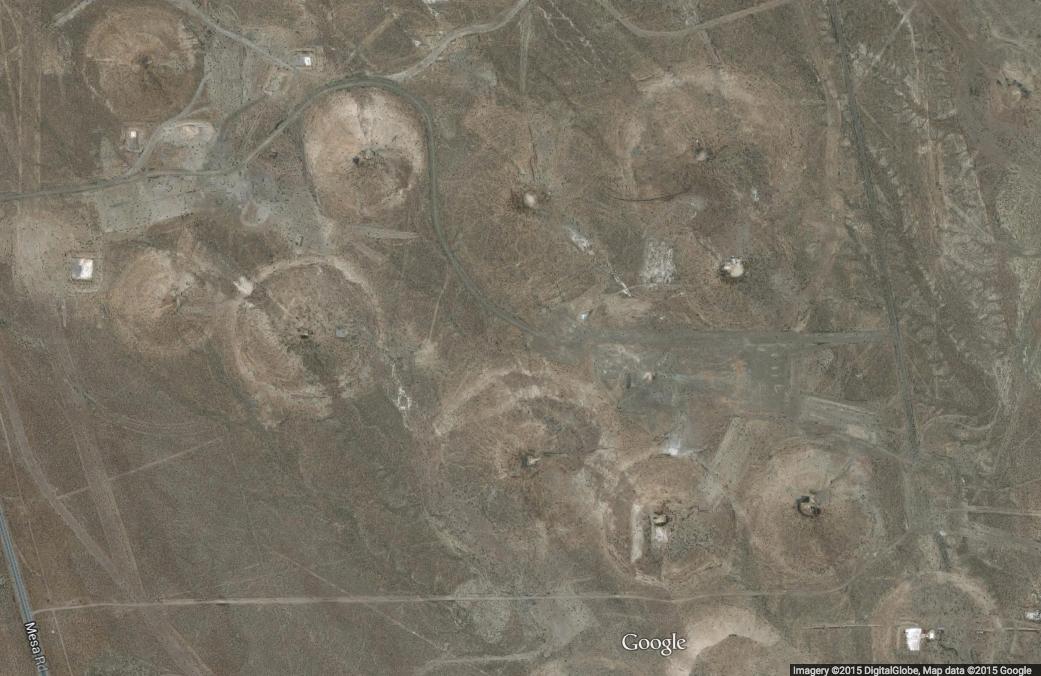 One might expect that a large explosion could cause an earthquake, but there's no real evidence for that either. Here are Goldblatt & Cox (1988, Oxford) in Nuclear Weapon Tests: Prohibition or Limitation?

Note that we're not talking about triggering surface waves that a person might feel — nuclear explosions definitely do that. This is about causing a fault movement or rock fracture. Goldblatt & Cox are saying that the explosive strain is too small and too transient — that is, temporary.

It seems beyond belief that a large detonation very close (within a few kilometres?) to a shallow, 'locked' fault, past due for an earthquake so to speak, could not trigger an earthquake, but I can't find any record of this having happened... maybe someone can unearth something.

Not the answer you're looking for? Browse other questions tagged earthquakes plate-tectonics transform-fault geoengineering or ask your own question.