What's it like inside a natural gas cavern on Earth?

I suppose natural gas underground caverns on Earth have substantial volume and gas is in gaseous form there.

As such I wonder how it would look like inside such cavern (with artificial light of course). Will one see a rocky sky at big distance?

What is the actual volume of such caverns? It is correct to talk about methane oceans or seas?

Are they empty or the gas is mixed up with solid substance?

A cavern filled with natural gas would look like an ordinary cavern. However, natural gas is rarely abundant in caverns.

Most natural gas reservoirs occur in the pore spaces of sandstones. These pore spaces are generally up to about 1 mm in diameter. Here's a photomicrograph of a sandstone — the green-blue colour is the pore space; Q, F, L, and M are quartz, feldspar, lithic fragments and mica respectively: 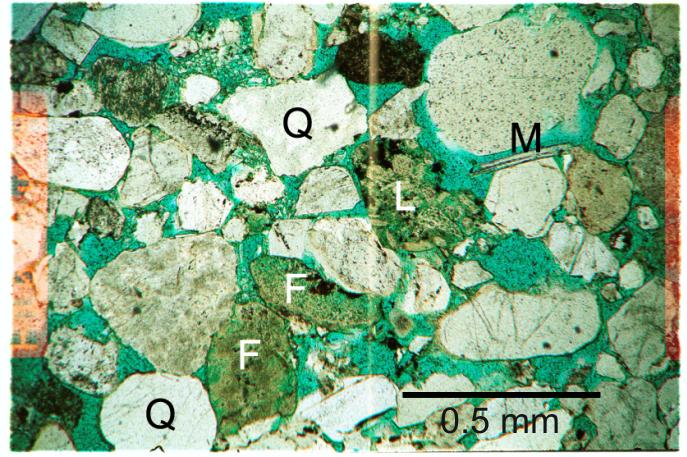 The pores of reservoir rocks also contain 'formation' water in various proportions. The relationship between the water and the hydrocarbons can be quite complex, depending on the fluid composition, the reservoir temperature and pressure, and the mineralogy of the rock.

So what about caverns? Trace amounts of methane probably occur in many, if not most, caverns — we're talking here about abundant methane. This is much less common, but it happens. In certain limestones pore spaces can be quite large — up to several metres in diameter. This is called vuggy porosity. If the limestone is charged with natural gas, the vugs will fill with gas, just like the other pores. The space would look like any other limestone cavity. Very large ones are rare, based on a typical power law size distribution. There are (copyright and unlicensed) images of such super-pores here and here. Recently Mattey et al. (2013; EPSL 374) wrote about methane in a karst in Gibraltar. I'd estimate that less than 1% of the world's gas is held in vuggy reservoirs.

There's another kind of cavern in which you can find natural gas: man-made ones. Natural gas is often stored underground, usually in porous rocks, but sometimes in caverns dissolved out of salt. Around a quarter of natural gas stock is stored this way in the US. Here's a video from such a salt cavern.

Last thing: methane seas can only occur at low temperature. As far as I know, liquefied natural gas or LNG is only stored above ground or on ships in tanks. Lots of natural gas reservoirs have very light hydrocarbon liquids in them — but again the liquid would be in tiny pore spaces, not caverns.

Pore sizes of typical reservoir sandstone range from 0.1 to 100s of microns.

Not the answer you're looking for? Browse other questions tagged geology gas cavern or ask your own question.

15
What causes "hydrocarbons" to take the form of petroleum versus natural gas?
6
Are there gases from the Earth useful to generate electricity besides "natural gas"?
7
Why is helium only found in wells mixed with natural gas?
3
Why does mineral oil occur below natural gas?
7
In an Earth-like planet with no history of carbon-based life forms, would there be limestone?
10
What is the most important source of natural gas? Coal, oil or other?
6
Considering the thin piece of material on the surface of Mars in the image below, is there anything like it on Earth?