How to tell if a single day of weather is an anomaly or due to climate change?

I am interested in understanding how to tell if a single day of 'abnormal' weather is due to climate change or not.

From my understanding, you would compare this day's weather to historical weather. However, is a day-to-day comparison accurate? Or would you have to take a large sample, like week, month, or season?

It seems to me like it would be hard to compare one day to another historical weather average, because the day could just be an outlier not due to climate change...

In other words, how do you tell if a seasonal storm or really hot summer day is due to climate change?

I am interested in understanding how to tell if a single day of 'abnormal' weather is due to climate change or not.

You can't. The day-to-day, locale-to-locale variations in weather are huge compared to the changes that occur from year-to-year and decade-to-decade, averaged over the surface of the Earth. Most of those climatological variations are periodic in nature (e.g., El Niño Southern Oscillation, North Atlantic Oscillation; note the "oscillation" in the names). Climate change is the small but steady secular change in climate.

The observation of even a few exceptional storms can provide quantitative evidence for climate change. Doing so however requires observing and learning as much as possible about how storms work, and not merely counting storms. With some understanding of how atmospheric systems and storms operate, we have other observational information from physics, chemistry, and planetary science that we can also apply to the question. We should use all the information available.

Bayes rule can help us do this objectively. Here, P(A|B) can be the posterior probability that the climate has changed (A), given the observation of the exceptional storm (B). P(A) is the prior probability for climate-change. P(B|A) is the likelihood that storm B occurs given a changed climate (e.g. warmer). k1 and k2 are constants of proportionality. Let (!A) represent no change of climate. Then we can write two equations for Bayes Rule.

Now if we use all the available information we have about atmosphere physics and chemistry, and we observe storm B in detail, we can make an informed estimate of the ratio of likelihoods P(B|A):P(B|!A). Let's assume that B is an exceptional storm and ten times more likely to occur when the atmosphere is warmer.

If a storm of type B is observed in actuality, the posterior odds can be applied, and the odds should be updated in favor of climate change to 10:1.

What this means is that the observation of exceptional (extreme) events should inform our opinion on climate change. This approach is most successful however when we have many, and many types, of information on how the atmosphere and climate works.

Measurements taken on a day during extreme weather will of course be outliers, but could also provide important information about how In a Warming World, Storms May Be Fewer but Stronger. We should not assume outliers always represent 'noise' that needs to be averaged away.

It does not seem unreasonable to ask the question whether or not we are seeing effects of climate change in the weather. Thursday morning I read the following on the US National Weather Service forecast discussion page:

CLIMATE...THERE IS A SMALL CHANCE THAT SEATTLE WILL GET TO 90 DEGREES ON SUNDAY WHICH WOULD TIE THE RECORD FOR THE DAY. SINCE RECORDS STARTED IN SEATTLE AT THE FEDERAL BUILDING DOWNTOWN IN 1891 THERE HAVE BEEN ONLY SIX DAYS IN THE FIRST WEEK OF JUNE WITH A HIGH TEMPERATURE OF 90 DEGREES OR MORE. THE LAST TIME IT HAPPENED WAS JUNE 4 2009 WITH A HIGH OF 91 DEGREES. FELTON

Whether or not the temperature exceeds 90 degrees next Sunday, I wouldn't dismiss the question of what mechanisms might be operating out-of-hand. We should try to estimate how much what happens supports (or not) hypotheses based upon physical processes.

Change in posterior odds in favor of A(0.15)

Finally, the advantages of using this approach, rather than a frequentist approach, can be more easily understood by considering how it could be applied in practice. For example, how a Penn Cove shellfish business might use these calculated changes of climate-change probability to self-insure their farm. The owner of a shellfish farm may understand that climate change poses a risk to her business, and has hedged for the cost of the odd bad year due to this by putting an extra 100 dollars into an account each month. She has found this has worked well in the past, with the account growing to be large enough to cover costs in bad years, without ballooning too large.

How might she use the information that Seattle is breaking temperature records (and the probability of A may be changing) to adjust this amount? If the temperature record is exceeded in 2015, she may decide to increase the amount to 135 dollars per month, and if the record is exceeded again in 2016 she may decide to increase it to 183 dollars, and if it is exceeded again in 2017 increase it to 248 dollars. The advantage is the Bayes method helps her make a decision to act sooner than by using a frequentist approach. This way she may be able to prepare for future costs.

The answers to such questions come down to statistical analysis; particularly statistical significance and statistical hypothesis testing.

When conduction such tests, care must be taken in choosing the data for the analysis: don't compare summer temperatures with winter temperatures. Also, the amount of data used needs to be large enough for the result to be significant. Don't compare the recent apparently anomalous temperature with temperatures for the past 2 or 5 years.

The other thing is seasons don't always start and finish according to human timetables. They vary, sometimes they start early or late so you need to have some leeway when choosing to data to analyze.

Initially you'd get the day of the month of the anomalous data, to account for seasonal variability over the years, you'd then decide how far either side of that date you wanted to compare data: maybe a week or two, possibly three or four.

You would then calculate the required statistical parameters, such a mean, standard deviation, standard error of the data, without the anomalous reading.

You then decide what confidence level you need for your analysis: 95%, 99.9% or higher. Then you do the hypothesis testing. One such test would be to test the anomalous reading with the mean of the historical data.

If the result of the hypothesis testing is that the anomalous reading is within the variability of the historical data then it's not due to climate change. If however, the anomalous reading falls outside the range of normal variability for the historical data then you start to look for reason why, of which climate change can be one of many reasons.

Individual days weather variations can only be considered anomalies, since the theory of global climate change/global warming/anthropogenic CO2 related greenhouse effect acceleration only is theorized and described as affecting the planet over the course of decades and/or centuries and globally, not individual days or individual locations. 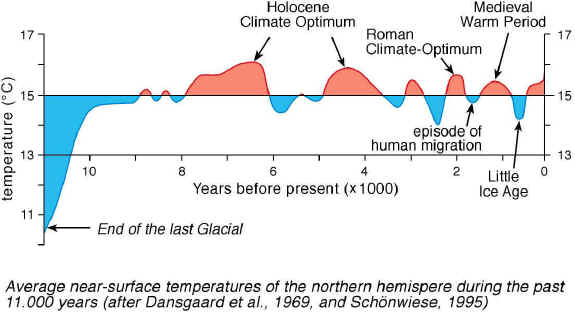 Answer: Weather is weather. Climate change is a "theory", not a "premise". Therefor with the question depends on the factual existence of climate change, which I believe is incorrect since the foundation knowledge doesn't support the extrapolation of measurement and observation to the extent some people have taken it.

Please consider that between quantum theory and the standard model, there is a reconciliation that has not been found. The balance point between that which is miniscule, and that which is massive has NOT been found. Our knowledge of physics is incomplete.

Example: Quantum theory vs Standard model (which dictates an origin where the entire universe existed momentarily in a singluarity smaller than a grain of sand that then expanded to create the universe)... No Big Bang? Quantum equation predicts universe has no beginning

So where we have observed and believe we understand what we perceive as "matter", we actually only understand the nature of 5% of what exists. The remainder, dark matter and dark energy fill the void between electrons and nuclei. Similarly between stars and planets. This is NASA's web site where the approximate quantification of Dark Matter and Dark Energy is published material:

By fitting a theoretical model of the composition of the Universe to the combined set of cosmological observations, scientists have come up with the composition that we described above, ~68% dark energy, ~27% dark matter, ~5% normal matter.

Without an understanding of the nature of the balancing act that lies in the middle between tiny and huge, believing we understand energy retention, energy dissipation, and the triggers involved to the point that we can properly determine the way the planetary energy system works is ludicrous. Physics in it's current state of development does NOT support our belief in CO2 based global warming.

Engineers have spent more than a year upgrading the LHC's systems. The hope is that this will allow a new realm of physics to be opened up!!

And when it comes to choosing the mathematical model that best fits our observations, we are still waffling between String Theory 11D, String Theory 12D. And we are attempting to determine if said strings even exist?!?! Discussion of the number of dimensions that exist

which posits that there are 10 or 11 dimensions in our universe.

So with our very OBVIOUS failure to understand physics, 95% of it being a dark mystery, and waffling over the number of fundamental forces, whether the origin of the universe was a big bang, how many dimensions there are, etc....HOW is it, we can ask ourselves questions like, is daily weather indicative of climate change, when we should be asking, is it viable to believe we have mastered knowledge of the physics of our existence, to the point necessary to be sure that climate change exists.

Not the answer you're looking for? Browse other questions tagged meteorology atmosphere climate climate-change or ask your own question.

28
What sort of climate zones would be present if Earth was tilted like Uranus?
6
What is the significance of the "super historic" rainfall for July 2015 in southern California?
11
Relationship between natural disaster and global warming, in the media
2
On what basics, can scientists predict the effects of climate change?
0
Can they still not predict rain even one week in advance?
3
How accurate is ERA5 weather data?
13
Why don't errors accumulate in climate models when the time horizon increases?