I have, to my knowledge, seen far more lightning strikes and heard more thunderclaps at night than I have during the day.

Are lightning storms more common at night, or are they just more noticeable at night? If it is significant, my experience is from the Great Lakes region of the US (Western New York state).

Googling, at least for me, has not been fruitful in answering this question.

The answer is dependent on the geographical location. Over sea, there is hardly any diurnal cycle of lightning (this means that there is no time of the day when lightning is more/less often observed). In continental regions (e.g. Siberia), however, there is a strong diurnal cycle of lightning: it is most common in the late afternoon, and least common in the early morning. The third type of regions are regions mainly affected by mesoscale systems (as is the Great Lake region in the US): here, there is also a strong diurnal cycle, but the peak (most lightning) is shifted towards the late evening or early morning. Thus, to answer your question: in these regions, there is indeed more lightning at night.

To help answer that, I'll start with a look at the broader country (and by extension, world), which is primarily my answer from a similar question on Physics SE, slightly adapted:

It's good to start with some foundation on what time of day lightning is most often seen. Here is a plot from Global electric circuit implications of combined aircraft storm electric current measurements and satellite-based diurnal lightning statistics (Mach, Blakeslee, Bateman: 2011) 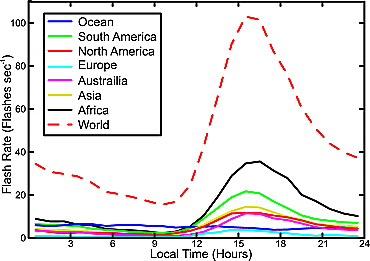 And to add a better idea of how much regional variability is involved, this plot of peak lightning time from Cloud-to-Ground Lightning in the United States: NLDN Results in the First Decade, 1989–98 (Orville and Huffins: 2001) 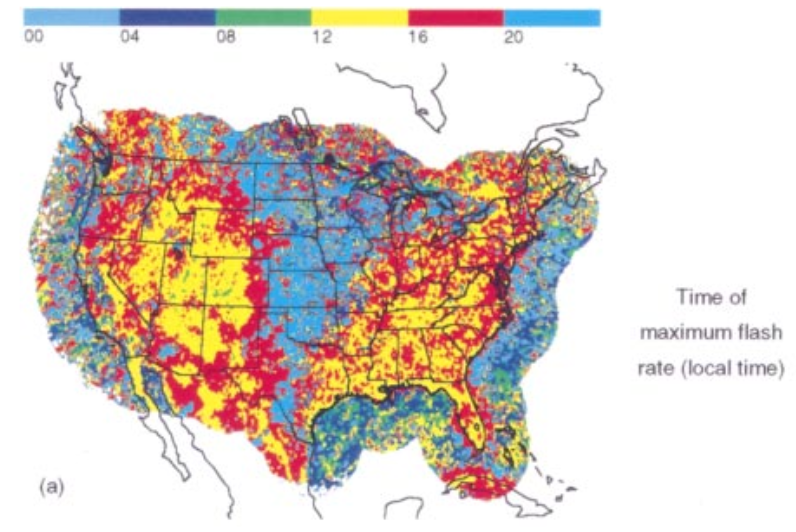 The summary is that the majority of places see peaks during the afternoon, but there is variation, including perhaps a few parts of New York.

Generally, the mechanism responsible for the majority of storms heavily determines when peak times occur:

One last factor that may impact our own experience is the reality that lightning is visually less distinct to us during the daytime. Lightning can regularly be seen for hundreds of miles at night (often given the misnomer heat lightning), whereas during the day, unless the sky is particularly dark or the actual channel is directly observed, often we'll only notice the thunder.

But indeed, while lightning varies greatly geographically, overall it peaks during late afternoon due to the nature of convection, and aided by many of the local mechanisms that drive it. 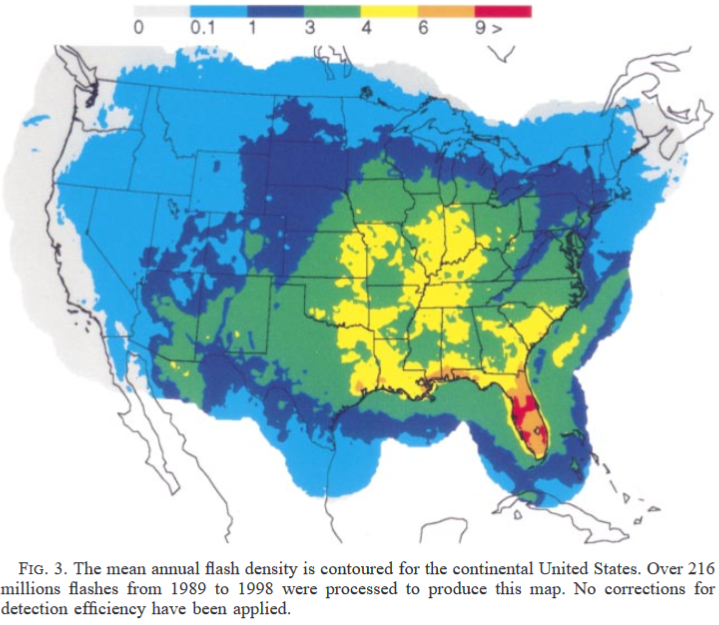 Showing you're pretty limited in your lightning up that way. But the time map does show some locations in western New York are more night-focused than many places in the US.

Looks like it's heavily caused by the lake. Over the lake the cool lake air should squash instability of incoming storms on warm afternoons. Lake breezes might extend that lull somewhat further inland, though it would also feasibly kick off storms as they advance, too. But I really doubt lake breezes up that way often get deeply developed enough to move inland and have a lot of influence during the summer. I don't see any radar evidence over the past few days of any.

Thinking some of the late-night lightning further inland, especially along the Tug Hill, might actually stem from the major lake effect snow events. I'd think that such events might often be strongest at night because air-lake temperature difference is vital to LES, and temperatures are lowest at night of course (winds often slacken at night, potentially mitigating this, but I believe most LES, especially on the eastern shores, come in situations with strong synoptic flow, where nighttime wind decrease shouldn't be much of an issue).

Not sure if you get enough thundersnow to really sway the needle towards night-time lightning. Maybe as you cool at night, storms fire over the lake at night, equivalent to landbreezes. Seems it may be a combination of factors that cause your fairly local peculiarity, but hopefully these ideas/factors offer at least a bit of insight!

Not the answer you're looking for? Browse other questions tagged meteorology thunderstorm or ask your own question.

11
Propagation of sound after lightning
13
Will dust storms be more frequent in the future?
6
How are lightning and thunderstorm intensity linked?
14
Why (actually) is the night sky so bright in the city? How far up is that happening?
8
What is the best way to stay safe while photographing lightning storms?
28
Why are hail storms always brief?
1
What percentage of cumulonimbus clouds create lightning?
9
Has a hurricane or cyclone ever reformed after passing over a large land mass?