Is everything in the water column going to be affected?

The answer to your question, based on linear theory, is no. The short answer is that the slope of these waves is very small, and the displacement of the particle paths is proportional to (ak) (times, perhaps, a depth dependent term) with a the wave amplitude and k its wavenumber. Now let's make this answer rigorous.

where $\nabla^2 \equiv \partial_{xx}+\partial_{zz}$ and $\phi$ is the velocity potential. We require particles on the free surface to remain there, and for the pressure to be continuous across the air-water interface, which gives us (assuming the atmospheric pressure to be 0) our surface boundary conditions

where $\eta(x,t)$ is the free surface displacement. Finally, we require the bottom to be impermeable, hence

for $h$ the depth of the water. These are a closed set of equations. Note, the governing equation, ie Laplace's equation, is linear and hence simple to solve. However, the free surface conditions are nonlinear, and more significantly, evaluated at a moving interface. This last condition makes these equations very difficult to solve.

Therefore, to make progress, we generally take asymptotic expansions of these equations. Here, we'll just linearize the equations about some small parameter $\epsilon = ak$ for characteristic wave amplitude $a$ and wavenumber $k$. We will also consider periodic monochromatic waves, so that one can show that the following $\eta,\phi$ satisfy the governing equations to first order in $\epsilon$:

where $\omega$ is the angular frequency given by the dispersion relationship

Substituting in the relations for $\phi$ found above, and then integrating in time, we find

Now, we can eliminate $\theta_o$ by squaring the expressions for the particle position to find

which describes an ellipse. I've attached a figure from Kundu and Cohen which illustrates this. 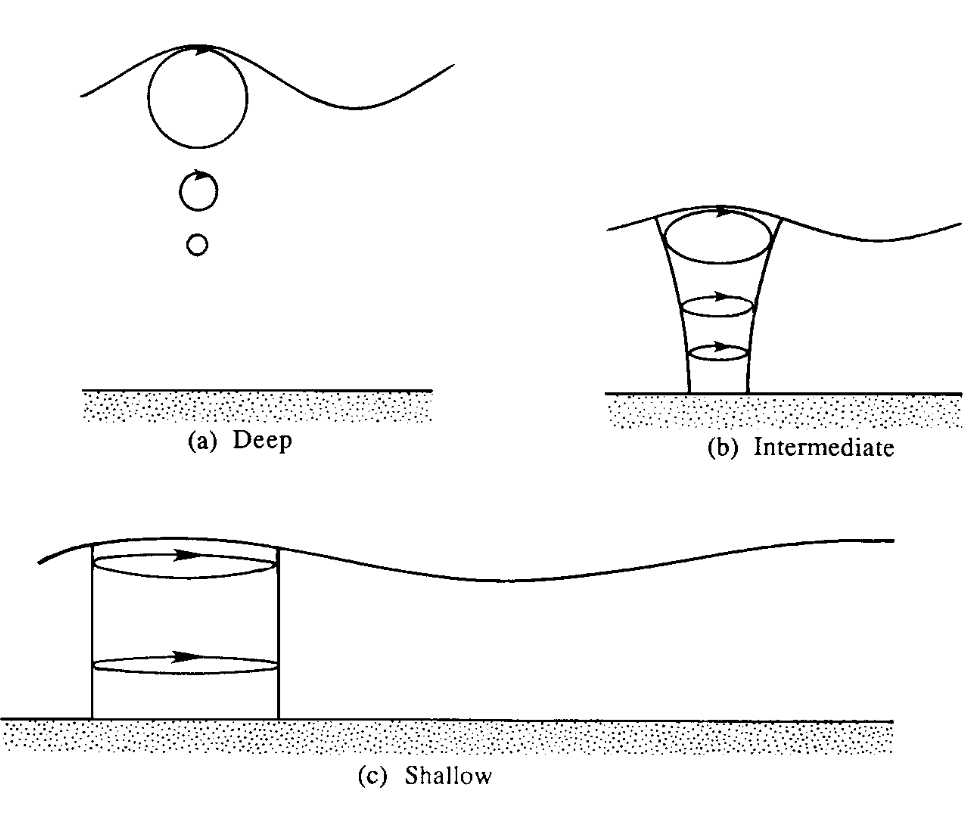 Now we can finally talk about some physics, and answer your question. For deep water waves, when $kh \ll 1$, the above relation reduces to the equation for a circle, hence the particles have a circular orbit which decays with depth (with an e-folding scale that goes like the wave number). For shallow water waves, i.e. $kh$ small, our equation describes an ellipse with a semi major axis that is much much larger than the semi minor axis, hence there's is nearly horizontal motion that doesn't decay much with depth.

Tsunamis have wavenumbers that are large enough so that even in the middle of the ocean they fall into the shallow water regime, meaning that the particle trajectories are approximately very flat ellipses, or horizontal lines, and this does not decay with depth. However, their deviations from their origin will be very small, as their slope $ak$ is very very small, e.g. $\mathcal{O}(1^{-5})$ for numbers I looked up online. Therefore, it's very unlikely that this will have much of an effect on a passive tracer.

Now, the story is very different as the wave approaches shore and steepens. But this is a different story for a different day.

I hope this helps. Feel free to ask any other questions,

Remember that a wave when it passes moves every particle up and down (with no horizontal component) so in deep water tsunamis have very little affect on anything. In addition, the wavelength/amplitude of these waves is huge so the water rises very gently and it is hardly noticed in deep water. In fact, the safest place to be when a tsunami is coming (beside high ground) is out at sea in deep water.

12
Why does the shoreline sometimes recede prior to a Tsunami?

19
Why do Tsunamis travel slower than sound?
12
Why does the shoreline sometimes recede prior to a Tsunami?
10
What visual wave behaviour help to tell if a tide is going in or out?
10
Does temperature affect partial pressure of gas dissolved in water?
5
How deep would the nitrogen and oxygen ocean be if cooled to liquid?
3
How would waves (in a fluid) behave without intermolecular attraction?
8
How much water does a wave transport into a sea cave?
0
How likely is that next big earthquake (and tsunami) will hit Philippines again?
1
Highest land altitude a tsunami has ever reached (record)
4
How much time is there between an underwater earthquake and the moment a tsunami hits the coast?