On a meandering bit of research through Wikipedia, I was looking at the Google Maps location of Texas Tower 4.

South-east of that location there is what looks like a river valley under the ocean. If you follow it back to the land it is obviously the Hudson river.

So my question(s) is: when was this 'valley' formed? Is the current of the Hudson river eroding this valley now, or was it eroded during a previous ice age? How old would this valley be? 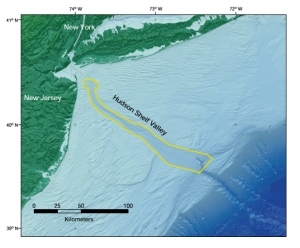 Assuming the question is about the Shelf Valley, Butman et al. (2003) provided a thorough explanation of the origin and features of the valley. Here is their discussion:

The 150-km-long Hudson Shelf Valley, the largest physiographic feature on the mid-Atlantic continental shelf, bisects the New York Bight region (sheet 1 figure 1, and sheet 2, figure 6 and figure 7). The Valley is the submerged seaward extension of the ancestral Hudson River drainage system that, unlike other valleys on the Atlantic shelf, has not been filled with sediment. The valley head is located in a broad shallow basin (Christiansen Basin) and extends offshore 5-40 m below the shelf surface to a seaward terminus at a shelf-edge delta (Ewing and others, 1963; Emery and Uchupi, 1972; Uchupi and others, 2001).

The ancestral Hudson River is hypothesized to have begun to develop in the Late Cretaceous when post-Atlantic rifting caused continued uplift and tilting of the margin, resulting in landward erosion and marginal seaward growth that continued into the Tertiary (Weiss, 1974). The Hudson Shelf Valley is thought to have been repeatedly downcut during periods of Pleistocene marine regression (Suter and others, 1949; Weiss, 1974). This downcutting possibly was amplified by the proposed catastrophic drainage of late Wisconsinan glacial lakes 12,000 - 14,000 yr BP (Newman and others, 1969; Uchupi and others, 2001). At this time, the shoreline was located approximately at the 60 m isobath (Thieler and others, 1999). At 12,000 - 14,000 yr BP, the large glacial lakes north of the New York Bight are thought to have breached the moraine front at the Verrazano Narrows and other locations in New Jersey and New York (Newman and others, 1969; Soren, 1971; Lovegreen, 1974). Boring data at the Verrazano Narrows indicate that more than 100 m of Pleistocene and Cretaceous sedimentary material was eroded as a result of this breaching event(s), along with most of the lacustrine sediment deposited during the previous 8,000 yr (Newman and others, 1969). Uchupi and others (2001) propose that late Wisconsin erosion of the Hudson Shelf Valley and deposition of sediment lobes (figure 1) on the outer shelf were a consequence of this catastrophic drainage.

OK, answering my own question(s), looking at the Wikipedia article on the Hudson Canyon:

The canyon was formed during the last Ice Age, over 10,000 years ago, when the sea level was about 400 feet (120 m) lower and the mouth of the Hudson River was near the edge of the continental shelf, about 100 miles (160 km) east of its present site.

As silt, sand and mud are carried down the Hudson River, they flow into the canyon and out into the deep sea.

Tidal currents sweep up and down the channel; and on occasion, during big storms, cold ocean water is pushed up the Hudson Canyon to spread out on the shelf. Thus the Hudson Canyon continues to be cut by traveling sediments.

Anyone else have any interesting information about this Canyon?

Not the answer you're looking for? Browse other questions tagged ocean geology rivers or ask your own question.

2
What is this long mark undersea

10
Sediment layer chronology
7
Round structure in southern United States
3
Was there once a glacier over Starcke national park in Queensland Australia?
3
How to compare the oil production in barrel vs production in tons
1
Arabian Desert rock formation
2
What is this long mark undersea
6
What is this geological formation in the Santa Cruz mountains that looks like a cave interior?