Why is it necessary in seismic imaging to calculate an image of reflection coefficients when one of the inputs is the velocity model?

Note: I'm not at all an expert in this field.

I read in the first few pages of Robein (2010; Seismic Imaging, A Review of the Techniques, their Principles, Merits and Limitations, EAGE) that both seismic imaging techniques, time and depth migration,

But it seems to me that the velocity model would be good enough as an image of the underground and performing excessive processing of the data could mar the quality of the image produced.

One of the inputs to seismic processing is a guess at a low-resolution velocity model that is just good enough to build an image. It is not a geologically useful model of acoustic velocities in the earth.

That Marmousi example is a bit misleading, because that seismic section is a synthetic seismogram, simulated from that velocity model (and assuming or modeling rock densities — we need velocity and density to get rock impedance). It is a result of solving the so-called forward problem$\dagger$ — solving a system of equations representing the seismic experiment, shown here as G, given an earth model m, and getting synthetic seismic data d:

Geophysicists spend most of their time trying to solve the inverse problem — deriving an earth model m (which is the interesting unknown), given real seismic data d (which we measured), and the parameters of the experiment, our understanding of nature, etc (G). So in a real problem, we wouldn't know that high-resolution velocity model a priori.

So what was all that about 'requiring an estimate'?

We don't go straight from the data to a high-res earth model. First, we have to build a seismic image, via a process called migration, which requires us to guess a rough velocity model to focus all the seismic energy into something we can interpret. We do this by choosing a grid of velocity-vs-depth functions that seem to focus well. 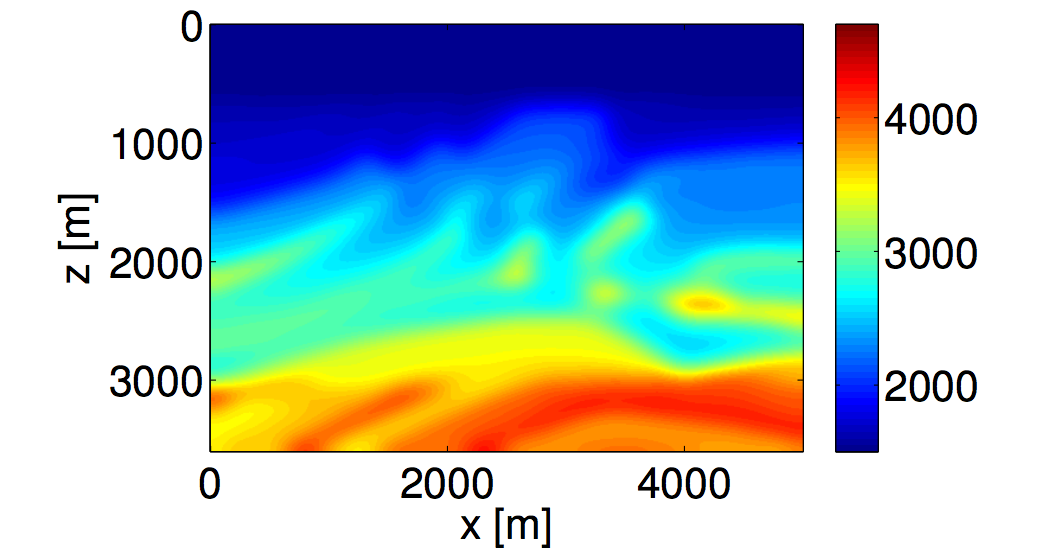 Once we have an image, interpreters and seismic analysts can use various methods to reconstruct a plausible model of the earth's impedance. This is called seismic inversion, and is a substantial area of research. It will almost never result in a model with the resolution of the Marmousi model, but we'd like it to be good enough, over enough of the stratigraphy, to be useful.