Can rocks have pressure signatures?

For example, when researchers are trying to determine past ocean levels, they usually look at isotopes. But is there any way they can look at rock morphology to see how high sea levels may have been (maybe a more compressed rock meant higher pressures, meaning higher sea levels and vice versa)?

Yes, but not directly, and it is very hard to know the exact pressure (in contrast with paleomagnetism where you can actually get a nice number).

One way to do it is to simply look at the minerals you have in the rock. Some minerals exist only in a certain range of pressures. The best and most known example is the two polymorphs of carbon: graphite and diamond. If you find a rock with diamonds in it then you know that (at least the diamonds) formed at great depth. There are many other mineral transformations that depend on pressure. Andalusite is low pressure whereas kyanite is high pressure. Plagioclase is low pressure, spinel is intermediate pressure and garnet is high pressure. You can look up images of those minerals for some eye candy! Note that I'm using the words "low" and "high" quite vaguely, as everything is relative and the exact numbers are not important for this case.

Another way of finding the pressure of a rock formation is by using the chemical compositions of the minerals in it. This is basically an improved version of the previous method. Instead of having a certain mineral assemblage transform to a second assemblage, we take two coexisting minerals. If we know how a certain element (for example magnesium or aluminum or whatever) behaves in a certain fashion relative to the pressure, we can measure that element in both minerals and find out the pressure.

A third way is to look at a thing called fluid inclusions. These are tiny bubbles of liquid or gas (or something in between, the distinction may be fuzzy at high pressures and temperatures), trapped in a mineral when it was forming. This is essentially a tiny pressure vessel, so using all kinds of methods we can figure out what was the pressure during that time. Here's a picture of how it looks under the microscope: 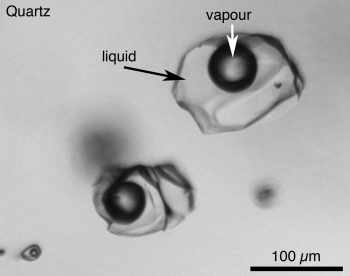 But is there any way they can look at rock morphology to see how high sea levels may have been?

Not using these methods. The problem is sensitivity. I was talking to you about diamond and graphite - this is extremely deep in the Earth. The pressure of adding a few metres of ocean on top of it are definitely not even going to tickle that transformation. Furthermore, for this to actually be effective, the rocks have to be directly on the seafloor. Once you start burying them in the sediment, you have additional pressure on top of them. A general rule of thumb is 100 metres of additional rock pressure equal 300 metres of water pressure. How would you know how much rock was on top of it? And as the rock gets buried deeper, how would you know what time frame your measurement represents?

So in short, no. We can't do it. There are, however, other methods of figuring out sea levels without using pressures.

Recorded pressures in rock would be a very useful measurement for multiple fields of geology. There are many answers to this question that depend on different types of rocks and processes. In general though, because rocks are elastic, pressure, which is a force per unit area, will cause stress on a rock. This stress, if applied at a low temperature and pressure, will compress the rock, temporarily deforming it. When the stress is released, the rock will return to its pre-stressed state. If this stress is applied over a long period of time and at a high enough temperature and pressure, the rock will eventually deform permanently. This deformation is called strain and it can be related to stress using Hooke's law:

where $\sigma$ is stress, $\epsilon$ is strain, and $C$ is the compliance tensor. We can directly measure strain on rocks using lab tests such as a tri-axial stress test with cored rock. For this test, you apply a specified uniform or directional stress to a rock and measure the strain. These tests show the empirical relationship between stress and strain for different rocks: 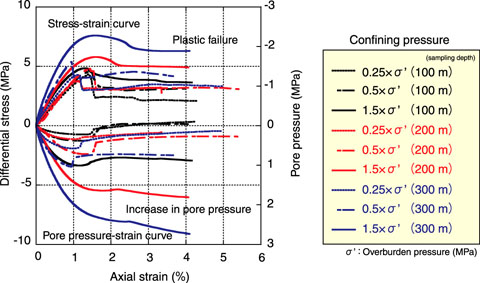 You asked about measuring sea level fluctuations; this type of pressure would apply a hydrostatic stress on the rocks. However, this stress would not be sufficient to cause permanent deformation in rocks. Therefore we (in O&G) generally rely on sequence stratigraphy to measure sea level fluctuations during a certain time period.

Here are some basic definitions of terms I used in this answer. Hope this helps! https://www.uwgb.edu/dutchs/structge/stress.htm

Not the answer you're looking for? Browse other questions tagged geophysics geology oceanography sea-level rocks or ask your own question.

11
Why would a suite of related rocks have one anomalous sample?
18
When can taste be used to help identify rocks?
7
Are the oceans rising or the continents going down? How can we know?
22
How can the world's sea level rise and fall simultaneously?
3
Effects of pressure at sea level
3
When metamorphic rocks undergo pressure, how are they changed?
3
What is the difference between subvolcanic rocks and plutonic rocks?
3
Energy Density of Porous Rocks
4
Can paleomagnetic techniques determine the exact direction of Earth's magnetic poles in the past, not just their polarity?