What would the climate be like on an Earth-like planet if it had only one convection cell per hemisphere?

Earth has three convection cells per hemisphere. These are the Polar cell, Ferrel cell and Hadley cell. These create the trade winds, westerlies and polar easterlies which control many aspects of climate, such as where rain shadows & dry zones are located and where ocean currents flow. 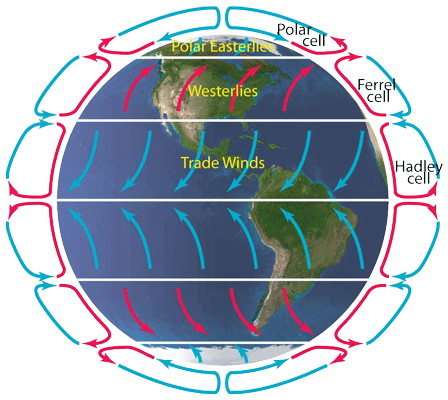 38
What would be the temperature of earth if there was no atmosphere?
2
Hypothetically, what would happen to the earth if a large hole was drilled through the center?
28
What sort of climate zones would be present if Earth was tilted like Uranus?
16
How much would the Greenland landmass isostatic rebound contribute to long term climate change?
18
What would be the first thing which will render the Earth uninhabitable?
4
What would happen if Earth suddenly stopped rotating and revolving at the same time?
7
How can we calculate the temperature of the atmosphere, including the greenhouse effect?
13
Does the magnetic field really protect Earth from anything?
2
What would happen to the Earth if there were no seasons?