Why does it rain more at night than during the day?

I'm living near a sea, and it rains mostly and heavily at night from 11 PM to 3 AM. The weather is mostly clear during daytime.

There is a similar Phys.SE question here which states the same thing.

Is this the only reason why it rains most at night, or are there any other factors which may affect the reason for raining more at night?

Note: I live in Chennai, India.

First off, your observation that Tamil Nadu gets more rainfall in the evening is partially backed by records. Sahany, Venugopal, and Nanjundiah, 2010 provide data on diurnal scale rainfall distribution during the Southwest monsoon season shows that Tamil Nadu is dry from 0530-1430 each day, and likely to be wet from 1730-0230: 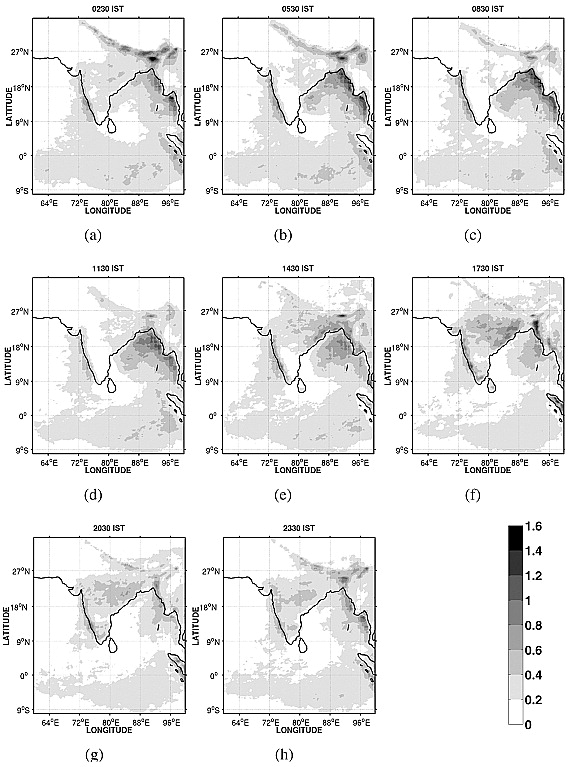 The Northeast monsoon is different. From Rajeevan et al, 2012 the NEMR (North East Monsoon Rainfall) peaks in the evening for most of Tamil Nadu but the coast facing the Bay of Bengal (including Chennai) peaks in early morning (0330-0630):

Regarding the reasons for this, here are some excerpts from Basu, 2007:

In the Tropics most of the rainfall is from the tall clouds (Cu or Cb) formed by convection within a deep layer of the atmosphere. The usual forcing for such clouds to form is the heating from below by the solar radiation absorbed by the ground during the day. This forcing is maximum near the time of maximum surface temperature and the first of the thunderstorms caused by insolation start near 1430 local time

Over the sea areas along the east coast (south of 15°N) too, the maximum in precipitation occurs in the early morning hours as the synoptic-scale westerly is weak over this region and the diurnal variation is dominated by the land–sea breeze.

The strength of the diurnal cycle is greatest in the peninsular region with close to 96% variance explained for stations located in Tamil Nadu.

My interpretation of this is that inland Tamil Nadu sees high surface temperatures from sunlight through clear skies striking the ground. The resulting heat is released in the late afternoon and evening, which causes cumulus or cumulonimbus cloud formation and rainfall. During this, the ground cools off at a rate faster than the nearby Bay of Bengal. This causes oncoming sea breezes laden with moisture and coastal rainfall peaks in the early morning hours. In Tamil Nadu especially, this pattern is very stable.

Not the answer you're looking for? Browse other questions tagged meteorology precipitation thermodynamics coastal diurnal-cycle or ask your own question.

12
Why is heavy precipitation from atmospheric rivers more likely to hit the West Coasts than the East Coasts?
19
Why do more tornadoes happen late in the day?
8
Are lightning storms more common at night?
12
Why does the earliest sunset time not coincide with the shortest day of the year?
5
Why does San Francisco see so much more fog than Seattle?
2
Why during subsidence inversion, upper layer warms more than lower layer?
5
Why did the Persian Gulf shrink during the influence of Ancient Mesopotamia?
3
Does saturation mixing ratio change during adiabatic ascent/descent?