Is there a reason most mountain ranges seem to run parallel to coastlines?

Eyeballing a map of the world, it seems that most mountain ranges that don't occur along continental fault lines run parallel to coastlines. Is there a reason for this?

The continental plates have less density than the oceanic plates and the buoyancy results in that they are mostly above sea level. Continental sea floor is known as continental shelf, but usually, it doesn't reach far from the coastline. Therefor the continental-oceanic boundaries often runs sub-parallel to the coastlines we see today.

Some of the mountain ranges that today are located far from the coast, e.g. the Urals are formed from earlier convergent boundaries between continental plates that today are incorporated in larger plates.

Convergent boundaries explains most of the mountain ranges (e.g the Andes, Himalaya, the Alps, Nihon Arupusu) but there are however some curious exceptions, e.g. the Scandinavian Mountains that are not located near any convergent boundary and might be the result of regional uplift. However, there is an interesting ongoing discussion on how these processes work.

This is a simplified answer that I hope inspire to further studies in tectonic and geology.

When two plates collide, if the one going down, if it is already under the sea, produces a depression which naturally will be filled with sea water whereas the other plate is raised by the collision originating mountains One typical example is the Andes.

While this is true in certain situations, it doesn't begin to explain how the vast majority of the earth's mountains are formed. In the global map below: 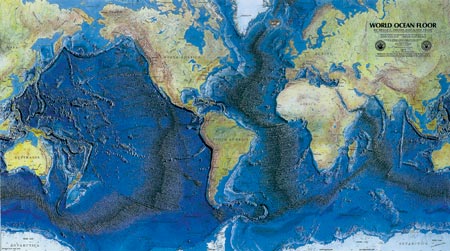 we see that the edges of many tectonic plates are edged by spreading ridges and subsequent mountain building. Obviously, most mountain building is actually the result divergent tectonics, and not convergent. Curiously, there is no interesting conversation about "how these processes work".

Nevertheless, it is interesting that Mid-Ocean Ridges as well as most continental margin mountains are aligned north-south. However, there is little reason to believe that mantle convection and thus plate motion MUST operate in this fashion and that it has always done so.

There is plenty of paleomagnetic evidence for landmasses moving in a wide variety of directions in the geologic past, that resulted in the creation of supercontinents. Today's N/S orientation may simply be an artifact of how the last supercontinent was broken up, and not evidence of the orientation of a permanent deep, driving force.

Not the answer you're looking for? Browse other questions tagged geology plate-tectonics mountains coastal orogeny or ask your own question.

21
Plate Tectonics: Is it possible to have an ocean-continent divergent boundary
14
What causes this striped rock formation?
3
How Do Plateaus Really Form?
8
How did the Ural mountains form?
4
Are the Olympic Mountains (in Washington state) geologically unique?
5
Are the cores of every mountain range igneous?
6
What is the impact of divergent tectonic plates on old mountain ranges?