At what rate are the polar ice caps shrinking?

At what rate is loss of polar ice caps occurring? Do we have enough data to distinguish a meaningful trend? If we look at the trend since we have satellite measurements (40 years or so), is that enough?

It's important to identify which ice. Polar bears are arctic, and they hunt in large part on sea ice. Arctic sea ice is decreasing and the most common point used for the disappearing arctic ice is the arctic sea ice minimum, meaning, the yearly low point, usually late September, so by that definition, we'd have an ice free arctic, you know, for a few days, but ice will form again as winter kicks in.

That loss of arctic sea ice probably won't kill "all" the polar bears but it would likely kill a fair share of them, making their hunting more difficult. This has already started and will probably continue to get worse.

Also, arctic sea ice has virtually nothing to do with flooding cities. Flooding of cities has to do with melting of glaciers on land - essentially water that isn't currently in the oceans but as it melts it adds to the oceans. Also, warming oceans expand, so warmer water increases flooding too.

As far as the timing of the ice free arctic minimum, it's very hard to predict due to natural variability year to year, but 40 years doesn't seem far off - at least, looking at the trend, but there's also no guarantee the trend will be consistent. 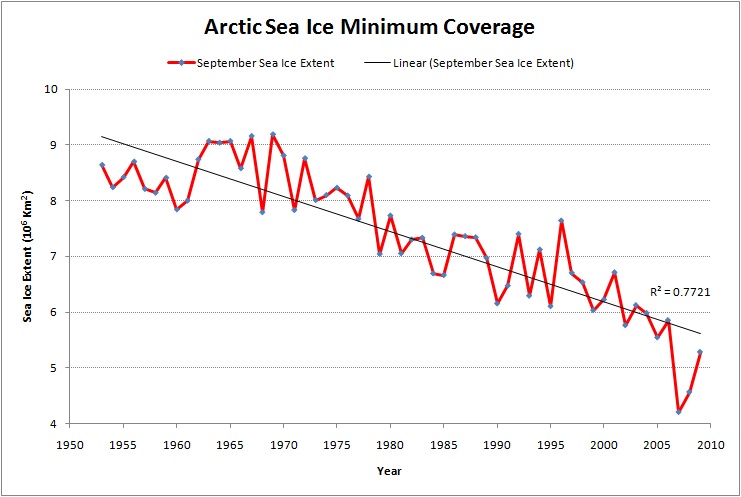 If there's a mechanism that helps retain ice, such as cold water currents near the pole or a weakening of the warm Atlantic gulf stream, that could extend the ice quite a bit longer. It could also happen quite a bit sooner than 40 years if we have a few more years like 2012 or 2007, each year showed a significant and unexpected reduction in minimum ice cover compared to previous years.

A rather famous sea ice prediction was done by Professor Wieslaw Maslowski who in 2007 predicted we could see an ice free arctic by 2016 plus/minus 3 years - which Al Gore later quoted and said "there is a study that says we "could see" an ice free arctic by 2013 and the deniers have loved referencing and misquoting that quote ever since. I think Maslowski's predictions moved later a few years shortly after, but nobody remembers that. Everybody remembers 2013, though he actually said 2016 plus/minus 3 years. Ironically, we could still see a big sea ice drop by 2019 and in that case, Maslowski wouldn't be far from wrong, but his is still one of the most made fun of predictions in all of science.

Maslowski's estimate was more aggressive than anyone else, but that doesn't mean he did bad work. I've never looked into the specifics, but there's a ton of articles, some less friendly than others, on his 2016 plus/minus 3 years (which some people simply refer to as a failed 2013 prediction) Here's one

Also an ice free arctic in late summer means sea ice will still form in fall and stay through the winter and spring, so Polar bears will still likely have some sea ice to hunt from long after the "ice free arctic" happens, but the warming in general makes their survival more difficult and that's likely to continue and get worse.

As far as flooding cities, sea ice doesn't raise sea level, so that's a different subject. That has more to do with the melting of glacial ice on land, primarily Greenland and Antarctica. The melting of entire glaciers is on a whole different timescale and the melting of all of Antarctica might never happen, even in worst case global warming models, at least, it might not happen until Antarctic drifts off the south pole into warmer waters, but that's several million years away. Parts of the Antarctic glacier could melt and parts have already melted, but only a teeny tiny percentage so far.

The IPCC forecasts for sea level rise includes both melting glaciers and warming and expanding oceans and they predict maybe 2-3 feet by 2100 (or 1-3 feet, depending on who you ask). Compared to that, if all the glaciers melted, we could expect a sea level rise of about 230 feet, so clearly, nobody is predicting glaciers will melt completely anytime soon - not for many hundreds if not thousands of years, but those predictions are even more difficult.

But like sea ice predictions, glacier melting predictions are hard to estimate by trend cause the ice can give way more quickly or more slowly depending on a variety of factors. Precise predictions are enormously difficult and not guaranteed to follow trends from the past. 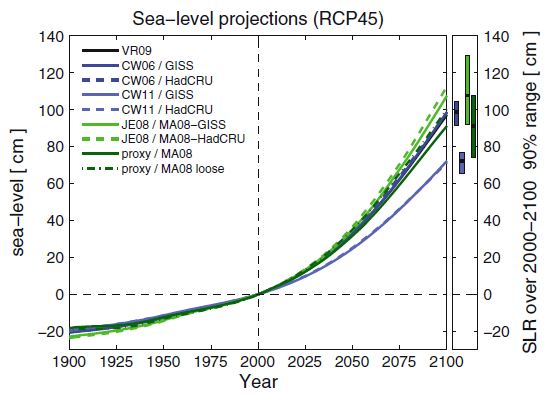 There's no shortage of articles to be found on sea level rise as well.

This is, of-course, one of the problems that a good climate scientist faces. "When will that happen?" - The honest answer is, we don't know, we can predict about when it's likely to happen, so the skeptic says "so you don't know."- which misses the point entirely. There's no question bad things will happen as a result of climate change. It's just hard to predict exactly what will happen or exactly when.

Not the answer you're looking for? Browse other questions tagged glaciology ice-sheets poles or ask your own question.

11
How long to melt all the polar ice?

13
Is Antarctic sea ice at record levels?
1
Reults of the glacials and interglacials of the ice age on the soil
5
Can ice caps reform if they disappear?
10
Considering how old the Antarctic ice cover is, why isn't it much thicker?
4
What caused the Carbon Dioxide Variations observed in the 800,000-year polar ice record?
1
Polar Ice caps are melting? Questions on enviromental impact
5
Is 2,000 years from now a credible figure for return to glaciation?
7
How does ice-penetrating radar "see" through kilometers of ice without being absorbed?
3
What (if any) "in-situ instrumentation" is on the Brunt Ice Shelf that will detect its splitting and breaking away?