where are the thickest limestone layers on earth ? (CaCO3)

What is the maximum thickness of limestone layers on earth?

(Limestone or any other biochemical sedimentary rocks, for example chalk or coral reefs.)

Reading your comments I see that you're asking:

so could we find for example 1km high limestone layers on earth ?

The answer is definitely yes. Here's an example of a stratrigraphic geological section from Israel: 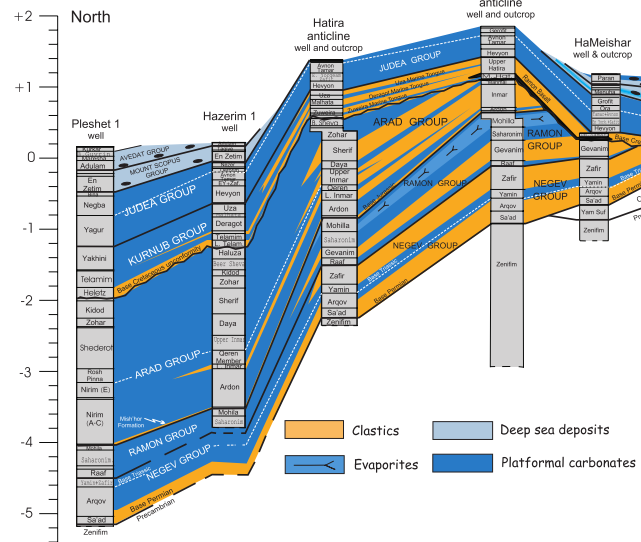 source: Chronostratigraphic table and subsidence curves of southern Israel, Gvirtzman 2004, Israel Journal of Earth Sciences, 53 You can see that in the north of the country there is an almost entirely continuous section of "platformal carbonates" which is just a fancy name for limestones. That's 5 kilometres of limestone. And I'm pretty sure that's not the deepest - that's only the one I personally know.

That's a sedimentary basin where you can drill and still find fossil-bearing limestones deep down. This gets even better if you start adding tectonics to this. Plate movements can do funny stuff to rocks, including burying them really deep. If you take limestones and do that to them, you actually transform them into marble. Basically marble (proper) is limestone buried deep and cooked. And by deep I mean really deep. Some marbles from the Alps are known to come from more than 100 kilometres deep! Note that I'm not saying it's limestone all the way down, but there are chucks of marble (formerly limestone) down there.

If you want to be really extreme, there is an article where the authors say:

...carbonate sediments were subducted into the upper mantle...

Upper mantle is 200-300 kilometres deep. And you know what? That's only the ones we know of. Who knows, there might be some limestones that were subducted all the way down to the core-mantle boundary, almost 3000 kilometres deep.

Not the answer you're looking for? Browse other questions tagged plate-tectonics sedimentology stratigraphy biogeochemistry limestone or ask your own question.

13
Which are the biggest methodological differences between the archaeological and geological approaches to stratigraphy?
13
Have meteorites been found in the oldest sedimentary rocks?
12
What is the age of the earliest traces of life on Earth?
11
What is the oldest sediment?
3
Why do we see the limestone on top of Cambrian layer?
4
What are the differences in terms of appearance between sandstone and limestone?
7
In an Earth-like planet with no history of carbon-based life forms, would there be limestone?
4
Is there a place where the sea floor descends into the mantle of the earth?
3
When sediments are deposited, do they sink into the earth?
2
Stratigraphy of limestone applied to the Great Pyramid of Giza