How is abundance of elements in the Earth's crust estimated?

In an quiz app I surprisingly learned that aluminium has a larger abundance then iron. When researching this on Wikipedia, I found this article, which also had the comment:

Note that numbers are estimates, and they will vary depending on source and method of estimation.

Now I wonder what methods exist and were used to estimate this? The only idea I had, that they took probes from different places and averaged the result, but that sounds like a very vague guess, because you would need a lot of probes from different places and depths (up to 50km deep), so I guess they used another method to estimate this. If somebody knows how the numbers are estimated, can he also say how accurate this estimations are?

can he also say how accurate this estimations are?

Let's begin by saying that the crust is heterogeneous. There is no one "composition of the crust". If you go to a place rich with limestones, then Ca and C are the most common elements (excluding O), if you go to a place rich with granites then Si and Al are the most common. Go to places with abundant basalt and you get lots of Mg. That means that the accuracy is irrelevant. If you have the average of an entire continent, there is no one rock or one area that has this composition. And if there is, it is by pure coincidence.

what methods exist and were used to estimate this?

One way to find an average is to know how much of each rock you got (which is easy if you have geological maps of everything) and what's the composition of each rock. However, there is a more clever way of doing it. You can sample sediments. Take major rivers that have huge areas in their drainage basin. These rivers transport the fragments of those rocks as sediments and deposit them in one place. All you have to do is to analyse those sediments. Surprisingly (or not), when you actually do this for rivers in Europe, America, Australia, etc, the composition of them turns out to be almost identical! So that's one way to derive an approximation.

You can't directly probe that deep. Our deepest drill hole was just over 10 km, and that was almost impossible (and extremely expensive to do). Fortunately, we have an indirect method of sampling rocks from 50 km and even deeper. Sometimes magma erupted from depth tears away pieces of rock from the walls of the conduit. This rock is then embedded in in the volcanic rock. Here's an example: 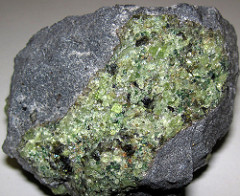 You have the black basalt and in it a rock that came from several tens of km below the surface (or more). By collecting a lot of those deep-seated rocks from volcanic rocks, we can get a good idea of what the lower crust and the upper mantle look like.

Not the answer you're looking for? Browse other questions tagged geology geochemistry or ask your own question.

16
How much Uranium is there in the Earth's Crust?
16
Why is there Uranium in Earth's Crust?
6
What was the likely composition of Earth's early crust (how did crustal composition evolve)?
3
What is the difference between chalcophile and siderophile elements?
2
Ions & elements, which is the correct terminology to use when discussing chemical compounds in Earth Science?
5
Composition of Martian Crust
0
calculation monocationic elements
4
How do the different densities of the oceanic and continental crust affect earth's outer shape?
0
How is the difference in crust and mantle composition explained?