How to count lightning in a thunderstorm?

Is there an accurate way to count the amount of lightning happening in a thunderstorm? How is lightning measured? Is there a special unit for this?

There are many types of devices used for measuring lightning. The first natural radio wave receiver was also the first lightning detector invented by Alexander Stepanovich Popov. In 1896 Popov presented a paper on a wireless lightning detector he had built that detected radio noise from lightning strikes.

Popov's designed a very sensitive coherer (a primitive radio signal detector) connecting it to an antenna that received the radio waves from the lightning. The coher was also connected to a circuit with a battery and a relay that rang a bell and sent a pluse to a chart recorder that could mark the occurrence of the lightning.

Popov built a radio receiver that could only receive natural radio waves from lightning (then the only good source of radio waves) leading him after to build an artificial radio transmitter.

The radio waves of lightning travel much farther than the light and sound it produces so a lightning detector can measure the distance to the lightning strike. Some of today's lightning detectors use this basic concept. With four of them you can combine the time at which each device measures the radio signal from the lightning and determine the strike location. Meteorologist today call this detector a ground-based lightning sensor.

There are other devices used to measure lightning using other kinds of antennas and signal processing techniques like radar and temperature data. Lightning detection can also be from advanced devices on artificial satellites. Using direct observations such as with the Geostationary Lightning Mapper a near-infrared optical transient detector can detect changes in an optical scene, indicating the presence of lightning, frequency and location of lightning events. 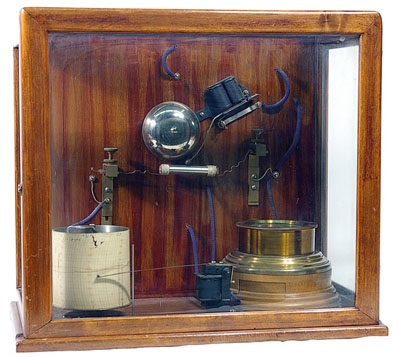 Not the answer you're looking for? Browse other questions tagged measurements remote-sensing lightning or ask your own question.

20
Why does Volcano Lightning occur?
6
How are lightning and thunderstorm intensity linked?
3
How accurate are the resistivity values from the electrical resistivity tomography (ERT)?
8
What is the best way to stay safe while photographing lightning storms?
8
Continuous lightning for over an hour; is this phenomenon common and does it have a name?
3
Why does upwards lightning use only one path but downward lightning uses multiple paths?