How can the world's sea level rise and fall simultaneously?

I have just been reading this article on Gizmodo (known for its hard science I know), that talks about sea level rising by up to 3 feet(!).

In the article and video, created from information from NASA it seems, it states that over the last 23 years sea level has risen in some areas and fallen in others.

Now, whilst I am aware that the level of water will vary with tides, how can the general sea level fall in some areas whilst it rises in others?

Surely if I add 9999 million gallons of water to the oceans, then the water level of the whole world should raise by the same amount everywhere?

How can the sea level rise in some places and fall in others?

There are lots of controls on sea level, not just the volume of water in the world ocean. These controls operate on different time and spatial scales, and interact in nonlinear ways. As a result, both global ('absolute') sea level and local ('relative') sea level can rise in some places and fall in others.

For example, absolute sea-level is currently rising, largely because polar ice is melting. But the rate of change is not the same everywhere, and indeed in some places sea-level is falling:

How can this be? Post-glacial isostatic rebound! Much of northern Canada was covered in a thick ice sheet in the last ice-age. This sheet was heavy enough to depress the lithosphere (the earth's crust)! Since the uppermost mantle ('asthenosphere') is plastic, it flowed out of the say, so to speak. The ice melted thousands of years ago, but the highly viscous asthenosphere is still flowing back, pushing the crust up as it does so. As the crust goes up, relative sea-level falls.

What about global sea-level?

Aside: Some people think changes in global sea-level, sometimes called eustasy, are synchronous and evenly distributed (see early literature on sequence stratigraphy). But, as I hope this tiny introduction will illustrate, it's more complicated than that...

There are lots of other mechanisms that affect sea-level, not just isostacy. Here's a list of Local and Global effects I made for my thesis (Hall, M, 1997, Sequence stratigraphy and early diagensis: the Sobrarbe Formation, Ainsa Basin, Spain, Manchester); I've also blogged about it: 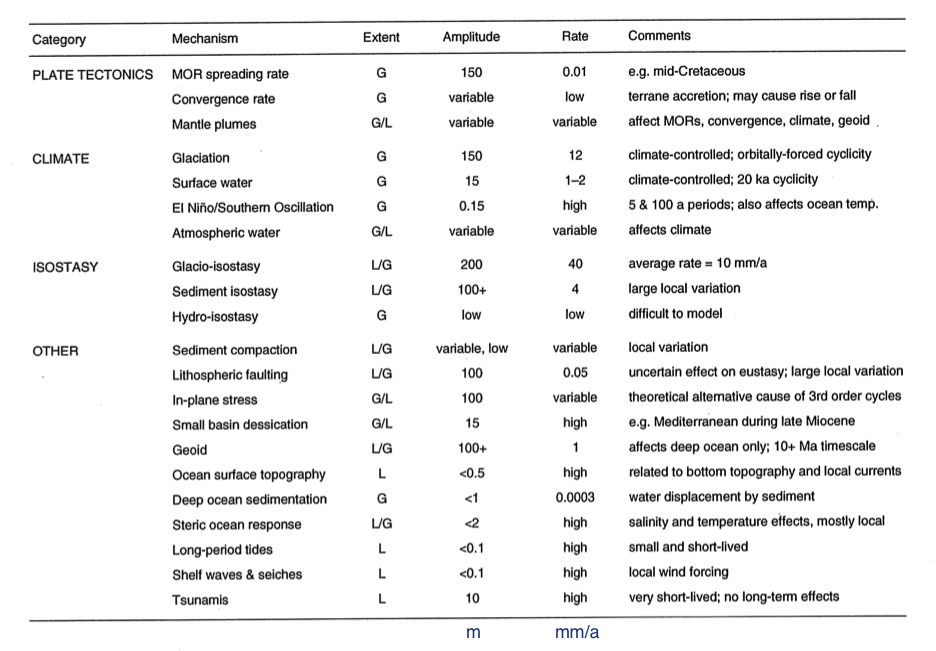 Some effects, like changes in the shape of the geoid and hydro-isostacy, affect the deep ocean too — changing the amount of water that, say, the Pacific can hold. Like all the others, these vary in time and space, and have complex relationships to the other effects in that table... so it's quite hard to model all this!

Not the answer you're looking for? Browse other questions tagged oceanography sea-level or ask your own question.