What is the effect of rising sea level on measurements of elevation?

If the earth's mean sea level rises, I assume that requires humans to adjust current measurements of elevation? For example, Mt Everest would no longer be 8,848 metres above sea level. Is there a more stable universal way to measure elevation such as on other celestial objects?

I know that zero altitude on Mars is defined as a specific atmospheric pressure of 610.5 Pascals, about six millibars which is the triple point of water on Mars, where it can exist as gas, liquid or solid.

The zero elevation point of the Moon is the average diameter since it has no atmosphere. So perhaps this is the most universal method to measure elevation?

Elevation can be measured against a tidal datum, in which case it is usually tied to some historic mean, or against a geodetic datum, which is statically defined.

Tidal datums, of which there are many flavours, are only useful locally and, as you thought, they drift over time. Here's what NOAA says:

Tidal datums are used as references to measure local water levels and should not be extended into areas having differing oceanographic characteristics without substantiating measurements. In order that they may be recovered when needed, such datums are referenced to fixed points known as bench marks. Tidal datums are also the basis for establishing privately owned land, state owned land, territorial sea, exclusive economic zone, and high seas boundaries.

For large (continental or global) areas of interest, you need geodetic datums.

In the UK, Ordnance Datum Newlyn was defined in 1956 as the mean sea-level at Newlyn, Cornwall, between 1915 and 1921. In the US, the North American Vertical Datum of 1988 prevails today (though several others are in use). It was pegged to the local mean sea level height at Rimouski, Quebec, Canada.

There are two types of reference surface, the earth's equivalent of the celestial ones you mentioned in your question: the geoid, and ellipsoids. The geoid is the surprisingly lumpy shape that the ocean surface would take in the absence of factors like tides. It can be measured with gravity anomalies, e.g. by GRACE. Since it's a natural surface, you could think of the geoid as the earth's absolute datum. Ellipsoids, on the other hand, are models of the geoid and, as mathematical surfaces, are smooth. 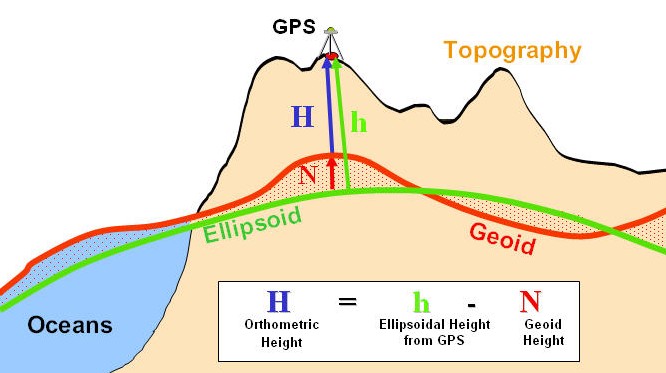 As shown in the figure, GPS uses the World Geodetic System of 1984 for its measurements, so elevation is measured against its ellipsoid. So one must correct GPS elevations to this orthometric height (height above the geoid).

If you want to read more, this tutorial on datums from NOAA is pretty fantastic. And here's a nice piece on the height of Everest, with respect to various datums.

14
Sea Level in Paleogeographic Maps
14
Effect on sea level if the Earth stopped rotating
10
What happens to sea level when a ship sinks?
7
Have there ever been any islands that disappeared due to rising sea level?
8
How to measure elevation above sea level
37
Is the sea level rise unusual?
2
What is the effect of sea-level changes on the extent of the Earth's atmosphere?
3
Is sea erosion the opposite of sea level rising (or rather, an adjacent phenomenon)?