Here's the base of my question: Was volcanic activity more prevalent when the dinosaurs roamed?

I'm not quite sure what "Oxygen requirements" means. It seems to me that atmospheric changes is a byproduct of life on earth more than a "requirement". There's other smaller factors, such as volcanic activity.

I think the best way to address this question is to start before the dinos, around 360 million years ago and the start of the Carboniferous Period when oxygen increased to higher levels than it had ever been and CO2 levels fell significantly, perhaps as low as 300 PPM, though estimates vary.

Something rather drastic happened around 251-252 million years ago but CO2 levels had started to rise before then, and the simple termite may have played a key role in the end of the Karoo ice age and rise in atmospheric CO2 .

When the Dino's came about (230 million years ago), CO2 levels were too high to have glaciers. Whether that was due to the massive mantle plume, or the termite or increased volcanic or some combination of all 3 is hard to say, but CO2 PPM has risen quite significantly by the time the Dinos came. 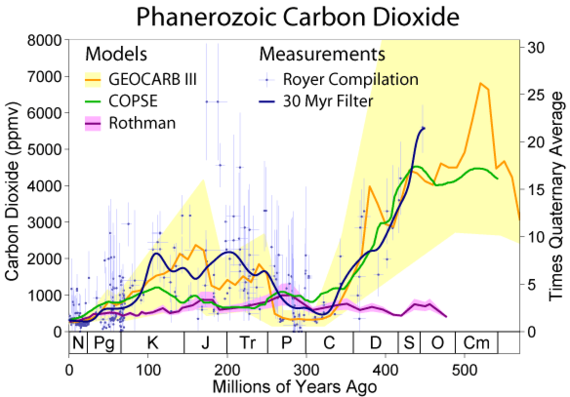 I recommend reading this part as it's more relevant to your question: https://en.wikipedia.org/wiki/Carbon_dioxide_in_Earth's_atmosphere#Measuring_ancient-Earth_carbon_dioxide_concentration

There's really no good argument at all. it's worth pointing out that while some people don't like the man made climate change theory and a handful of scientists continue to question it, it has stood up reasonably well to the tests, and no alternate theory has even come close.

When the Koch brothers funded a study to prove the "urban heat island" effect, their study suggested the CO2 effect was even bigger than the IPCC's studies said it was.

There are a number of factors that can effect climate. The Earth's orbital changes, ocean current changes, sunspots, volcanism, deforestation, snow cover and albedo, cow farts, land location, mountain ranges and their effect on rain and atmospheric circulation, but none of those effects are playing a significant role in recent decades. CO2 is the only driver that makes any sense at all and it's quite clear that the cause of the rise in CO2 is the burning of fossil fuels.

Not the answer you're looking for? Browse other questions tagged volcanology earth-history co2 oxygen or ask your own question.

6
What causes the counter-intuitive presence of CO2 in the atmosphere during spring and summer months?
1
Lava and Magma, Meteor and Meteorite--What's the Difference?
5
Why did the carboniferous period have so much atmospheric oxygen?
0
Which are the mechanisms of the correlation between atmospheric carbon dioxid and global warming/cooling?
3
Reference units for CO2 concentration in the atmosphere and meaning of a slight downward tendancy during the 1600
4
What is the difference between mobile & molten rock?
5
Why are $\small\sf{CH_4}$ and $\small\sf{CO_2}$ levels coupled during the Pleistocene?
2
What was the oxygen concentration in the air during the late miocene period?