What is this blue rock? [closed]

I am trying to identify a rock my husband found.The rock was found in Columbus Ohio about 20 feet (6 m) down. It is about the size of a basketball and extremely heavy (90 lbs) and difficult to cut into (3 diamond partner saw blades were only cut an inch into the rock). There are very smooth and very rough areas on the surface. It is mainly blue and white but there is also a bit of green here and there. All over the surface are pockets of crystals that are clear/sky blue/algae green. I have been trying for almost 15 years to find out what it is.

Additionally... when my husband's crew found it they were so curious about what the inside looked like they tried to cut it in half with a partner saw using a diamond blade. They ruined 3 blades and the saw and only got about an inch into the surface. 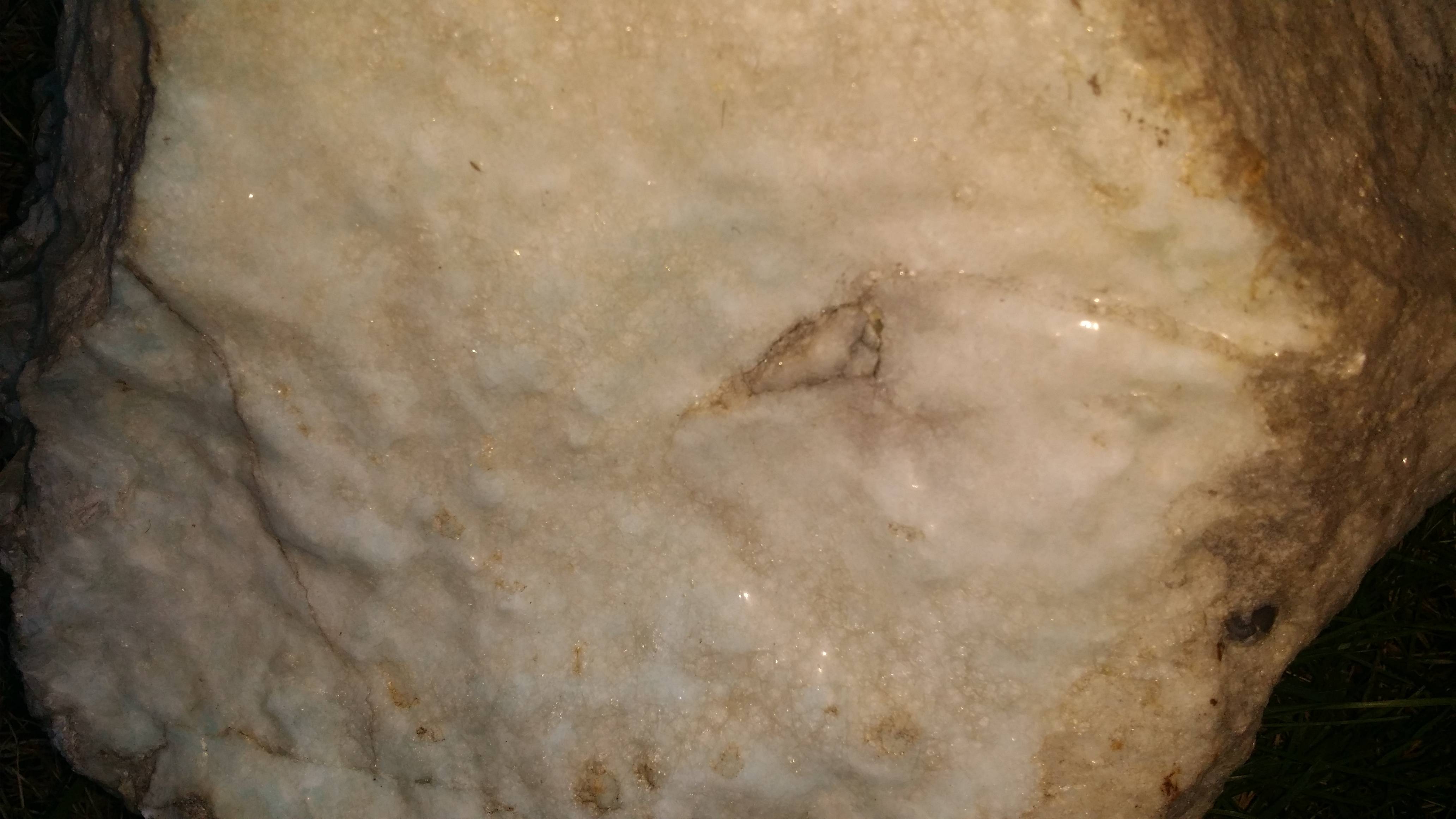 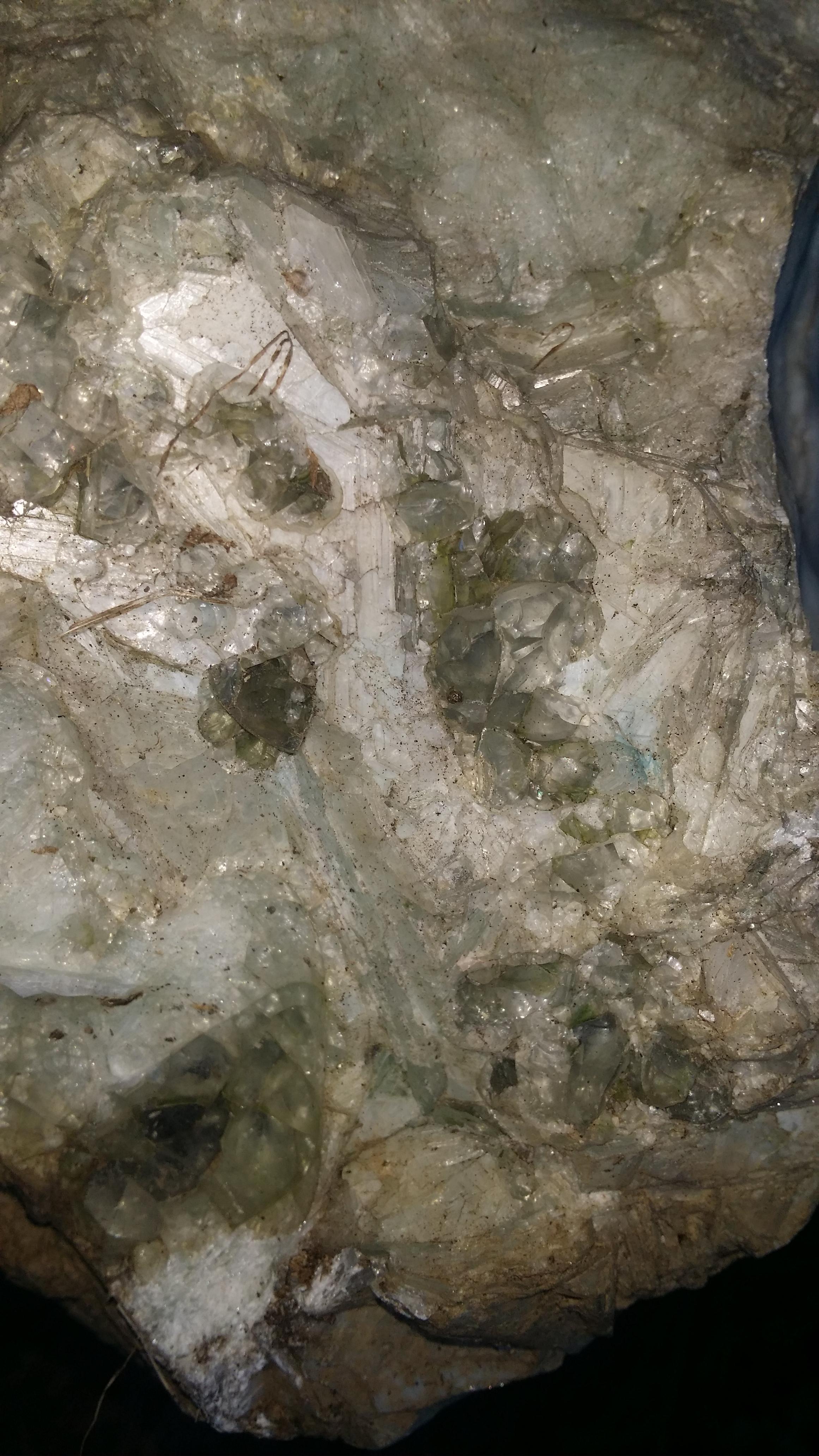 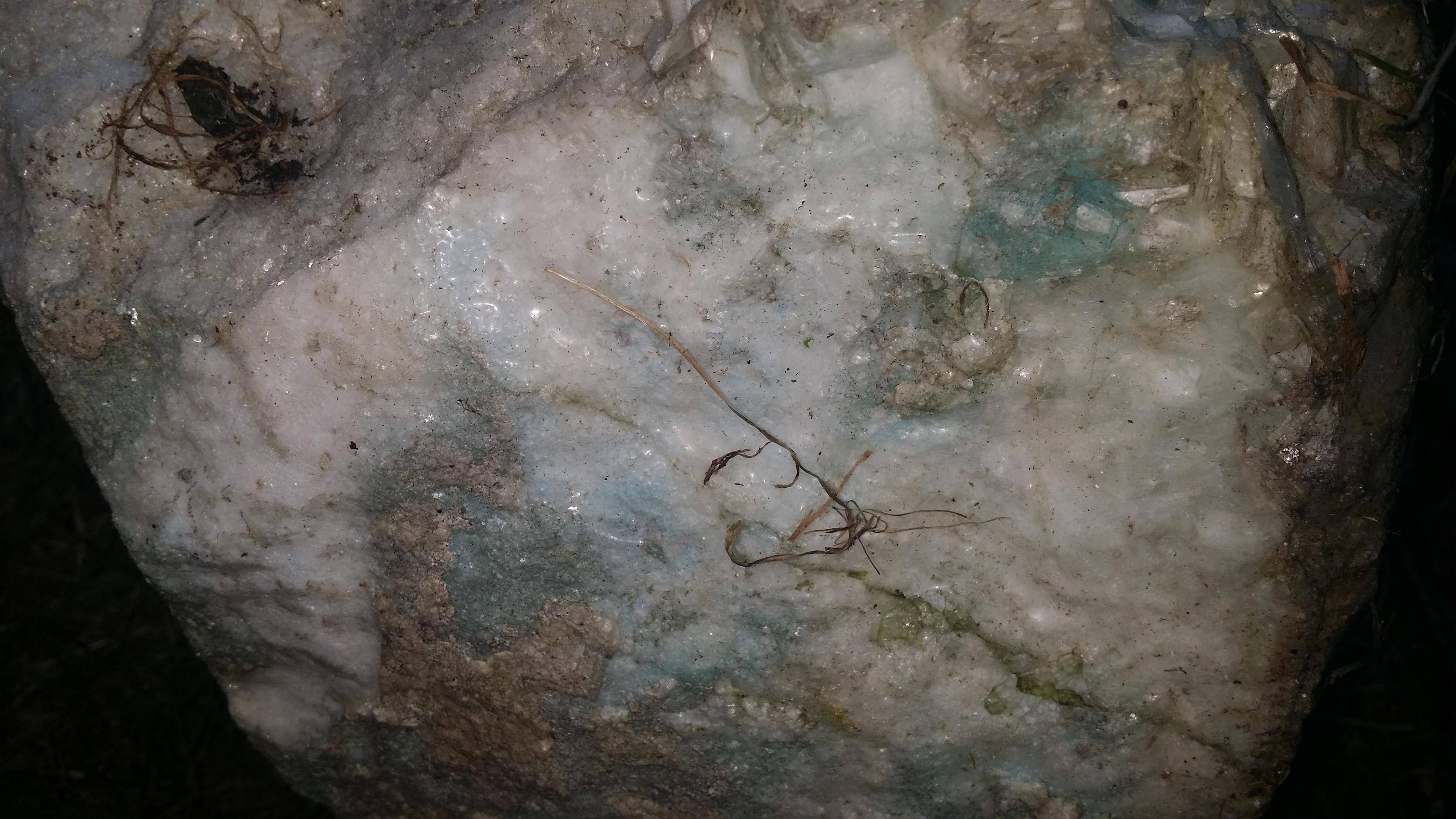 A full set of pictures is available here.

Very interesting pictures. I will go out on a limb and say it looks like it is mostly barite (barium sulfate, $\ce{BaSO_4}$). The clear ball-shaped crystals may be celestite (strontium sulfate, $\ce{SrSO_4}$). Barite often forms tabular crystals and is very dense. It is used in drilling mud for oil wells because it can help hold in the pressure. The sedimentary basin brine found in Pennsylvania and Ohio has quite a bit of barium and strontium so the sulfates could form. Maybe others can weigh in.

Maybe you can google pictures of those minerals an see if it looks right and check for other simple tests you can form to help identify the minerals or find a geologist at a university.

I disagree with Barite. Barite is very soft (hardness of 2.5 to 3 on the MOhs hardness scale) and would therefore cut very easily. I think it's just quartz crystals in a quartz matrix. Nice crystals, but nothing too mysterious to the trained eye. Thanks for sharing the pictures. Just as an FYI - when rock is burried at great depths in the crust and voids, caverns or caves exist in the rock, those voids are where crystals grow. That's what's happened here. When this rock was burried at depth (and I'm talking tens of kilometers deep, and millions of years ago - geological scales; again, nothing mysterious about that to the trained rock hounds) it had cracks and crevasses in it and those voids had mineral-rich fluids (silica dioxide or SiO2 in this case, which is the chemical composition for quartz) entered the rock and slowly grew crystals. Over time (again, millions of years) with the help of tectonic forces, the rock (which would've been part of an outcrop at one time) got broken off and transported and buried and eventually dug up by your hubby. Cheers.

Not the answer you're looking for? Browse other questions tagged geology mineralogy identification-request or ask your own question.